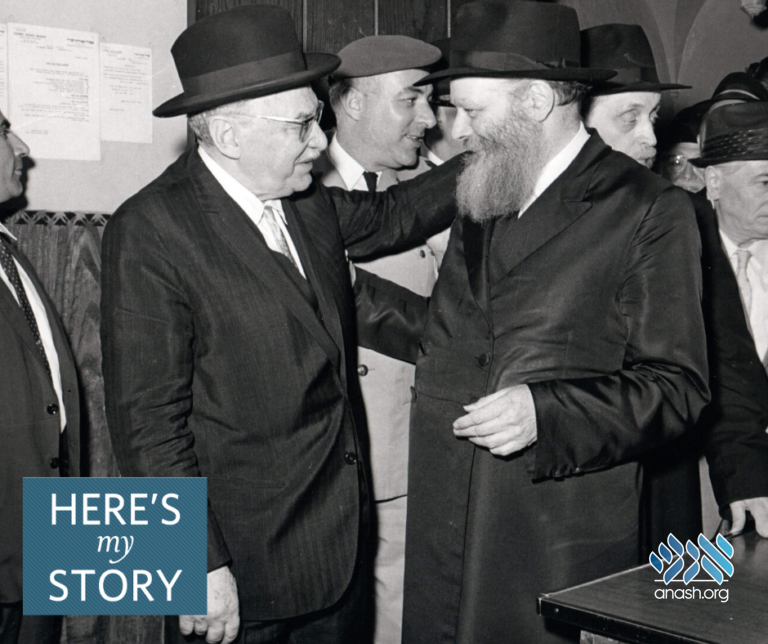 Rabbi Shear Yashuv Cohen, whom the Rebbe once called an “old and dear friend,” visited the Rebbe frequently, who advised him on a public career spanning 60 years.

Rabbi Shear Yashuv Cohen (1927-2016) served as the chief rabbi of Haifa, Israel, for thirty-six years. He was interviewed by JEM’s My Encounter Project in February of 2006 and April of 2010.

The first time that I had the privilege of meeting the Rebbe, he told me that he stayed for some time in the home of my grandfather, Rabbi Chanoch Etkin, in Luga, Russia.

This must have been in 1926, when he was engaged to be married to Rebbetzin Chaya Mushka, the daughter of the Rebbe Rayatz. The Rebbe was then heavily involved in his future father-in-law’s educational programs and was working underground.

Just to illustrate how dangerous this work was — the following year, the Soviets arrested the Rebbe Rayatz and sentenced him to death for the crime of “counterrevolutionary activity” — namely, promoting Judaism.

It was only due to international pressure that he was released but was exiled from Russia. The Soviets were after the Rebbe too. They were searching for him, seeking to arrest him, so he had to flee.

This is how it happened that he was brought to my grandparent’s house, and he stayed there for several months until it was safe for him to leave. He slept and ate there, with my grandmother taking care of his needs, and he studied Torah with my grandfather. They developed a deep friendship although my grandfather was not a chasid but a follower of Mussar, the Jewish ethical movement.

I believe that, because my grandfather took him in during a time when his life was in danger, I had the merit to develop an especially close connection to the Rebbe.

I once asked him about what happened back in Russia, and he related to me a chasidic story — which I don’t recall precisely — about a man who rows a boat across a lake to take people to the Garden of Eden. But he himself cannot enter until he finds somebody to take his place. The Rebbe said that he ended up putting his life in danger because he couldn’t leave Soviet Russia until he found somebody else to continue the holy work of the Jewish underground. Finally, someone was found to take his place, and that is when he went into hiding at my grandfather’s house.

Because of the kindness that my grandparents showed him then, I was privileged to have free access to the Rebbe, to meet him privately many times, and to be present at Purim in 1971 — together with the President of Israel, Zalman Shazar — to hear the reading of Megillat Esther in the Rebbe’s presence. I was most touched when Shazar asked the Rebbe, motioning toward me, “Do you know this young man?” and the Rebbe answered, “Of course! He is an old and good friend.” He didn’t mean that I was old — I was then in my forties — but that we had known each other for a long time.

And, of course, we spoke about my sainted father, Rabbi David Cohen, who was a great Kabbalist known as “the Nazir of Yerushalayim” because he never cut his hair or drank wine in keeping with the ancient biblical tradition.

He expressed the opinion that they should never agree to retreat from any place in Eretz Yisrael for the illusion of peace. This would not have the desired effect, he said, for giving up land would only endanger the safety of Israeli Jews and non-Jews. “Certainly, we want peace,” he said, “but the way to bring true peace is by being strong.” To support this, he quoted Psalm 29: “G-d will give power to His people; G-d will bless His people with peace.”

I suppose because we had many such frank discussions that, on one occasion, I had the chutzpah to ask the Rebbe why he won’t come to Israel. Of course, I immediately added, “I’m not telling the Rebbe what to do, but I know that if the Rebbe came, it would change the entire landscape of the country and greatly benefit Judaism.”

He answered me, and I do believe that I was one of very few people who got an answer to this question.

He said, speaking in Yiddish, “I know how to go there, but I don’t know how to come back.” He believed that it was not permissible to leave the Holy Land, and therefore he could never return to the United States. “And I have work to do here … I haven’t finished my work here.”

Then he explained that he took upon himself not to be any place so far away that he could not reach the graveside of the Rebbe Rayatz in Queens within twenty-four hours. He mentioned that the chasidim of Montreal invited him for a ceremony there — I do not recall if it was a dedication of a new building or of a new Torah scroll — but he didn’t go because of the distance from New York.

I am sorry he never came to Israel. I do think that, if he could have come, it would have changed history because of the tremendous impact that he would have had. But he maintained that he needed to remain in the United States where he could have maximum influence on the Jews of the Diaspora.