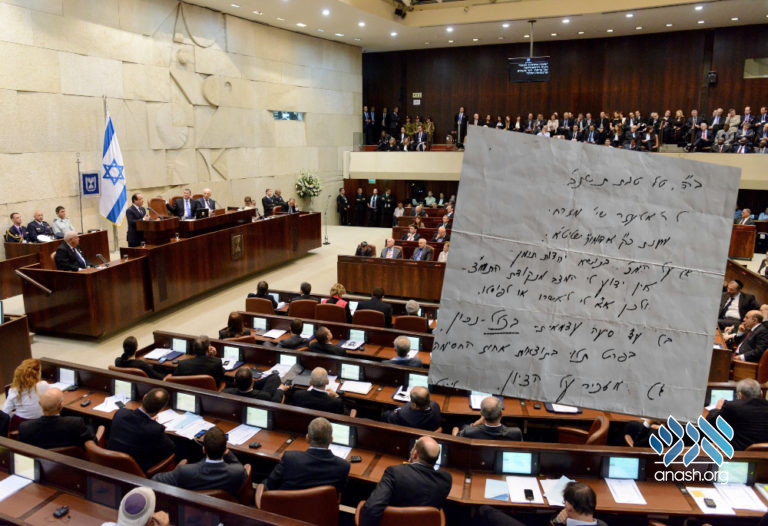 As the Israeli elections approach some are claiming that the Rebbe would want them to vote for a political party that will not pass the electoral threshold. A newly released response addresses the issue.

As the Israeli elections approach, some are claiming that the Rebbe would want them to vote for a political party with staunch values even if it might not pass the electoral threshold. They bring proof from the fact that, in 5752, most of Lubavitch voted for a party led by Rabbi Eliezer Mizrachi, ostensibly with the Rebbe’s approval.

A response from the Rebbe, released just this week, seems to contradict that assumption.

“In the month of Tevet 5752 (shortly before Chof Zayin Adar 5752), I formed the ‘Geulat Yisroel’ party and prepared for an independent run for Knesset. We asked the Rebbe about this, and also about an episode of the ‘Yaldei Teiman’ taking place at that time.

“‘Regarding an independent run for the Knesset, in general is a correct thing to do. In particular, it depends on the results of the electoral threshold.’

“Indeed, we checked with the Likud and it turned out that, according to polls, we would pass the threshold. One must remember that in the 1990s the threshold was very low. We also based on additional working assumptions. In the end, we did not pass, and the bitter result was a left-wing government that brought the Oslo Accords and thousands of Israelis killed.

“From the Rebbe’s words, it is clear that it is forbidden to run if one will not pass the threshold. Particularly today, with the high threshold, it is clear that a party that is estimated to receive less than 1 percent of the vote will not receive the 3.25 percent needed to enter the Knesset.”

“I appeal to all those in Eretz Yisrael to listen to the Rebbe’s instructions and not vote for this party. Chas v’shalom to go against all Rabbonei Chabad” Rabbi Mizrachi said this week, “Voting for the Knesset is not meant as a protest. The vote is meant, as the Rebbe said, to give more power to the religious parties”

“Please spread this message to anyone who is able to vote in the elections” concludes Rabbi Mizrachi.