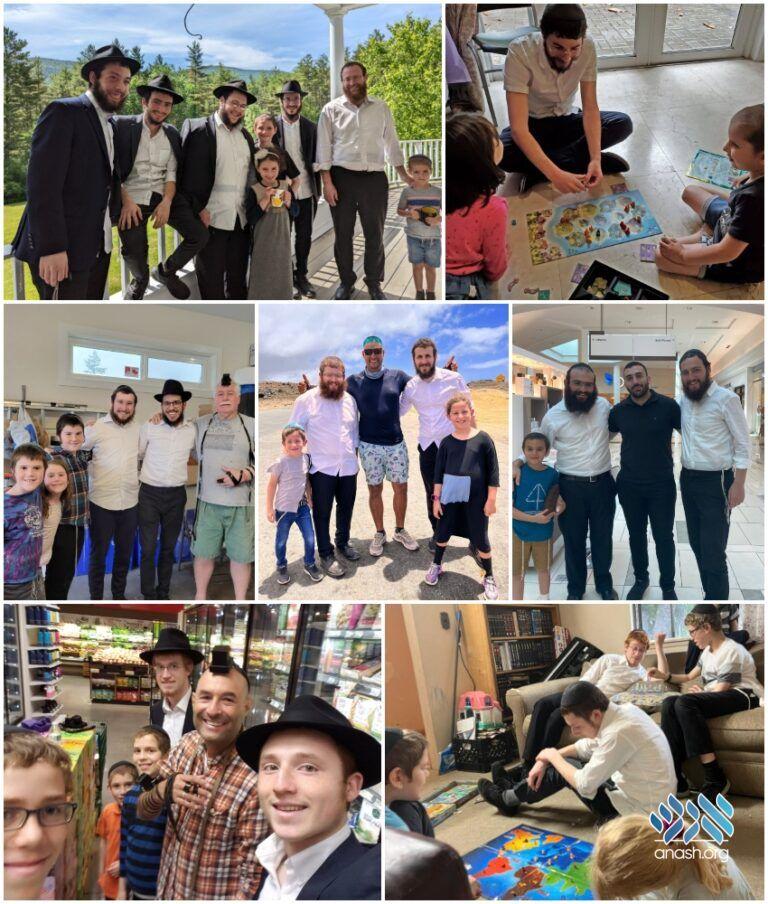 Bochurim setting out to join Shluchim for Shavuos faced a barrage of flight cancellations. Determined to reach their destinations, many decided to fly from farther airports or even drive the distance.

Rolling over in his sleep at 4:00 AM, Naftoli Gurary was roused awake when a notification lit up his phone. His early morning flight had been canceled. He would later learn he was one of the hundreds of victims of a flurry of weekend flight cancellations.

After spending hours in contact with American Airlines via email and telephone, Gurary managed to secure the last two seats on a flight out of New York to Pensacola, Florida. Landing in Florida, Gurary and his Chavrusa, Shmuel Sulami, were still an hour’s drive from their destination. They were headed to Mobile, Alabama, to spend Shavuos with the local Shluchim, Rabbi Yosef and Bina Goldwasser, and their three children.

Such scenarios played out again and again as 170 Bochurim attempted to travel to join Shluchim in eighty unique locations to enhance their Shavuos experience. Spearheaded by Mrs. Chani Goldberg, the visits were organized by The Ufaratzta Circle, the small town-community outreach department at Merkos 302.

The Bochurim helped ensure there would be a Minyan for Krias HaTorah to hear the Aseres Hadibros and lead all-night learning sessions with the Shluchim and their communities. For the Shluchim’s children, they brought treat packages, including an assortment of candies from which they could build a candy Har Sinai. The visits infuse the communities with high-energy Simchas Yom Tov and provide a powerful boost of Chizuk to the Shluchim and their families.

This year, with the prices of air travel soaring, the status of the annual Ufaratzta Shavuos visits faced much uncertainty. Tickets, typically costing around $200, were priced at $900 apiece. When the request began to flow in from Shluchim around the world, that was all the push needed to get the project rolling.

“Bringing authentic Yom Tov joy, both physical and spiritual, to Shluchim who are in remote locations throughout the year is invaluable,” explained Rabbi Moshe Kotlarsky, Vice-Chairman of Merkos L’Inyonei Chinuch. “The necessity for such a program is even stronger now, after the two years of the pandemic. We would not let technical challenges withhold this from the Shluchim.”

The challenges only increased as Shavuos grew near. With most of the Bochurim due to travel on the Thursday preceding Shavuos, airlines canceled over 1,370 US flights due to bad weather. Countless hours were spent contacting airlines and travel agents to rebook different flights. Many Bochurim took it upon themselves to fly to airports further from their destinations, and some even rented cars and drove the distance to join the Shluchim for Shavuos.

“All we knew was that we were needed in Alabama to help the Shluchim and Yidden celebrate Shavuos properly. Picturing the saddened faces of the little kids if we wouldn’t come for Yom Tov gave us the extra push we needed. Nothing would get in our way,” said Naftoli Gurary, reflecting on his journey.

For the Shluchim living in geographically remote areas with no family or fellow Lubavitchers nearby, the Ufaratzta Circle provides a network of support and connection. Ufaratzta looks to address the unique challenges that arise amongst Shluchim serving in isolated communities. The Shavuos visits are one of their many initiatives.

In an email to the organizers, Rabbi Benzion and Chaya Shemtov of Chabad of Sierra Vista, AZ, articulated what the visitors meant to them, their children, and their community.

“The Bochurim that joined us for Shavous were really amazing in every way. Today when they pulled away, it was such a hard moment for my children and me. In the words of my seven-year-old, “I think I’ll go to my room to cry instead of saying goodbye.”

“At our minyan, we were eight men and would not have a Minyan without the bochurim. My wife also pointed out that it had been over two years since we last had Birchas Kohanim for our community.

“As I write this and re-read it, it literally brings tears to my eyes, realizing the z’chus of hosting the Bochurim and how much it helped our children.”