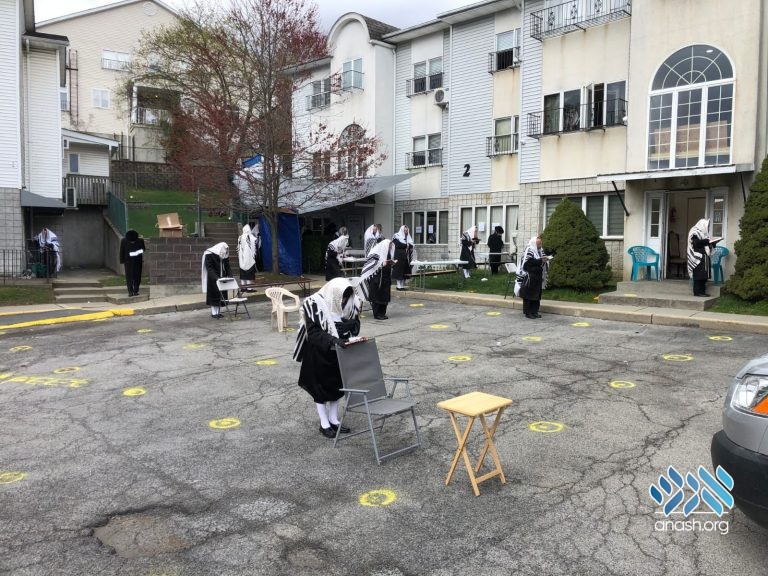 Despite new official guidelines, Beis Din Rabbonei Chabad in Eretz Yisroel released a letter calling on people not to daven in groups, but to continue davening alone or on balconies.

Israeli health officials issued new guidelines on Sunday, allowing outdoor minyanim to take place, but participants will have to wear a mask and maintain a distance of at least two meters from fellow mispallelim. The minyanim are limited to 19 people each.

The new guidelines come as part of efforts to reopen Israeli society and the economy. Many stores will be allowed to open, including electronics, housewares, bookstores, sporting goods, and furniture stores. The number of people in a store at one time will be limited, and customers will have their temperature taken when walking into a store.

Despite these new permissive guidelines, Beis Din Rabbonei Chabad in Eretz Yisroel released a letter calling on people to be stringent in matters of pikuach nefesh and not to daven in groups, rather continue davening alone or on balconies.

In their letter they wrote “Following our previous letter from Hey Nissan, where we banned minaynim in open spaces because of the difficulty in keeping to the guidelines, it is well known that “chamira sakanta me’isura“. So despite the easements of restrictions which permit minyanim to be held in the open spaces, we have consulted top experts, and it is our opinion is that it is advisable to continue to daven alone, or with a minyan on separate balconies.”

Harav Yitzchok Yehuda Yaroslavsky, Secretary of the Beis Din and Rov of Nachalat Har Chabad, addressed the residents of his community in a video message and said that after consulting with expert doctors, the Torah opinion is that minyanim should be done in the manner permitted until now.