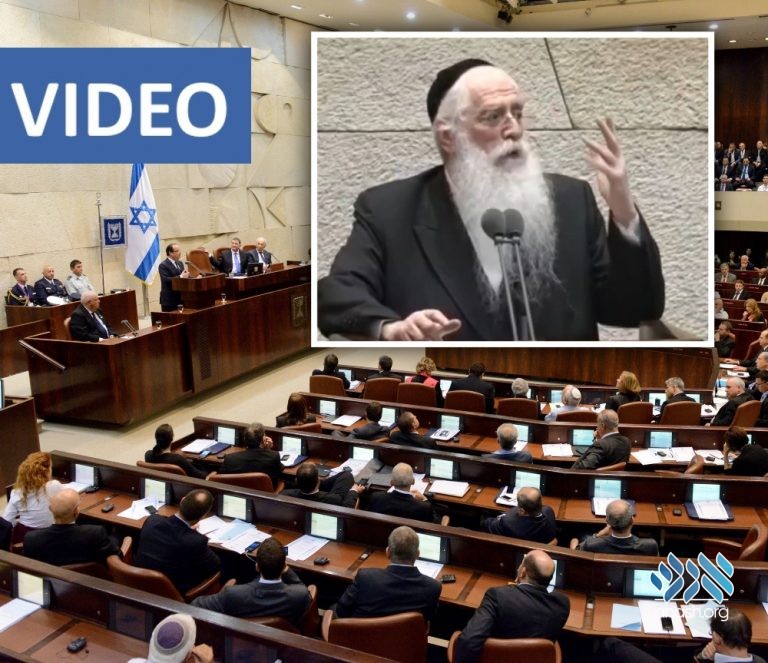 Deputy Education Minister Meir Porush addressed the Knesset on Wednesday, stressing the danger inherent in Trump’s ‘Deal of the Century’ in light of the Rebbe’s sharp words on so-called ‘peace plans.’

During a speech in the Knesset on Wednesday, Deputy Education Minister Meir Porush addressed the danger in President Trump’s ‘Deal of the Century,’ and mentioned the Rebbe’s remarks on the Palestinian Autonomy Plan as “A first step in handing over parts of Eretz Yisrael.”

Rabbi Porush, who was part of the Jerusalem City Council for 13 years, and for seven years served as deputy mayor of the city, now serves in the Knesset in the Agudas Yisrael faction of United Torah Judaism.

In his many official positions, Rabbi Porush has supported Chabad Chassidim tremendously, fighting for Shleimus Ha’aretz. During Knesset meetings that discussed the planned Disengagement, he quoted the Rebbe’s sichos, explaining the severity of evacuating Jewish residents from their homes and the danger that the move could bring to the country.

Now, with discussions of Annexation only second to to those of COVID-19, the deputy minister is once again expressing the imperative to heed the Rebbe’s words regarding giving up even one inch of land.

Rabbi Porush reminded the Knesset that the Rebbe repeatedly stressed that any talk of giving up land is the start of a downhill trend. “This is the first step in handing over more and more parts of the Land of Israel. Eventually, it will lead to giving away large parts – like Judea and Samaria.”

Rabbi Porush emphasized that Shleimus haTorah and Shleimus Haaretz are of equal importance. “Just like a Torah scroll missing just one tiny Yud is rendered invalid, the lack of one tiny portion of land affects the entire Eretz Yisrael.

“The Rebbe said that the very talk of giving parts of the Land of Israel is a matter of pikuach nefesh – because we know exactly who we are dealing with,” the deputy minister concluded.