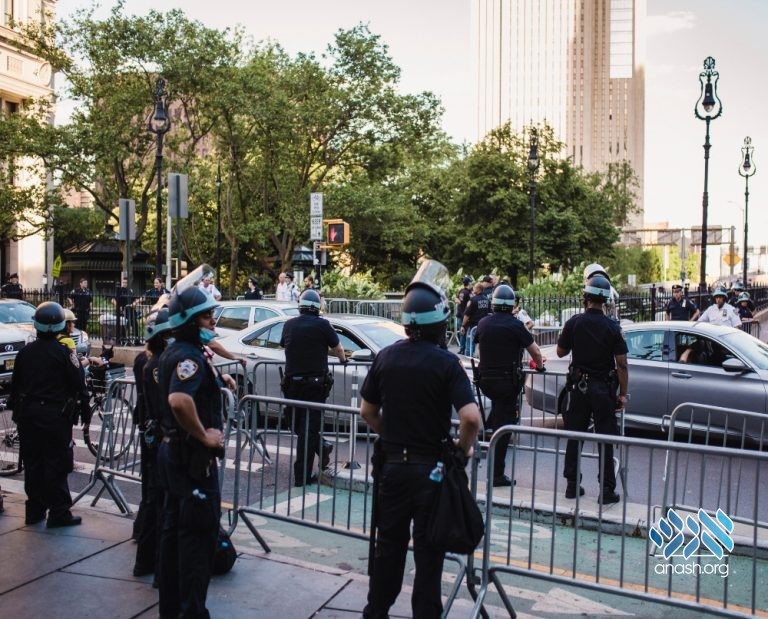 Op-ed: Mrs. Rivky Wilansky, who sees the campaign to defund the police as a sign of moshiach’s imminent arrival, shares how it opened her eyes to a new perspective on parenting.

When I first saw the campaign to #defundthepolice, i thought it was absolutely insane. I thought that this time, the world has really gone mad. True, there are some bad police officers who need to be removed, just like there are some bad doctors and some bad teachers… But most of them are just doing their job to keep this world safe! This planet would be a jungle if not for the police enforcing the law, and tragically, we’ve already seen the dangers of this campaign playing out in cities all around the US. It’s a frightening idea.

I felt especially disappointed to see this news because these past few months I was trying so hard to be positive. I believed that all this quarantine time taught humanity something about G-d and about what’s really important in life. That it made us better people, that it made this world a better place. It suddenly hit me that while that may have been true for many us in our safe moshiachdik “Ark”, that’s not what’s been going on for the world at large. It now seemed obvious that all this time “locked up” at home only brought out the worst in a lot of people. Instead of this pandemic leading us straight into the true and complete geulah as I was expecting, it seemed it brought us deeper into the galus, G-d forbid.

But I’m so grateful to some of our fellow chassidim like Rabbi Wolf and many others, who have not lost their geulah vision and focus for even a moment. They reminded me that if we just listen to the Rebbe and “open up our eyes” to the inside story, we will clearly see the geulah, and it’s actually so cool and exciting! It doesn’t take any wisdom or talent to see darkness and galus… What takes wisdom and talent is to see the light hidden within the darkness, to see the beauty that’s hiding within the ugly outer shell. And that’s the gift the Rebbe gave us.

As shown on the latest JEM video, it is our own Rebbe who came up with the idea of reallocating police funds! It’s the Rebbe who said that instead of spending crazy amounts of money on prisons, we should be investing our money in moral education so that people won’t commit crimes in the first place… It’s so encouraging to see that the world is finally taking the Rebbe’s advice seriously.

And it’s the Rebbe who taught us in the famous sicha of Shoftim 1991, that the command to appoint policeman only applies to Galus… And that we are now beginning the era of geulah, when all policemen will be replaced with advisors.

Whether liberals realize it or not, it seems that they are actually catching on and crying out for Moshiach! They are demanding that geulah become a reality. They are simply not willing to be controlled by police anymore. They don’t want anyone to be forced into complying, they want people to be helped and coached into complying… The message is actually really awesome!

From this perspective, I love the idea of defunding the police! I’m enjoying hearing that the left believes that it’s not just a fantasy. I’m happy to see that so many people have faith that it’s possible to eventually eliminate the need for police altogether.

This is part of the prophecy of geulah unfolding!

Of course, I’m not so naive to think that all those fighting to defund the police have altruistic intentions or that they know how to reallocate in a safe, gradual, and practical way… But if the Rebbe can see the positive side in Korach’s argument, in Miriam bas Bilga, in the hippie movement, and in countless others, then we can do the same.

I realized that Geulah is a process. It’s not necessarily about the need for police disappearing in one magical moment. It’s about a gradual intolerance to force and control that we’ve been seeing more and more over the last few decades. It simply doesn’t work anymore! The era of policing is over.

The truth is that I’ve been noticing this with my kids for a long time already, but I didn’t fully understand it till now.

I used to feel so vulnerable when I realized that I can’t “control” my kids. I felt so frustrated that there is no way I can “force” even my 4 year old to do what I want him to do. I would set a mental reminder to myself that negativity just doesn’t work with them, that it’s a waste of my time and energy to go that route. That it’s not only often ineffective, but also counterproductive.

But then I would forget and try again.

But now, I realize that it’s not just me, and it’s not just my kids. It’s our whole Geulah generation. We are just DONE with the old way of policing – of control and force and fear and threats and punishment. In today’s generation, even raising our voices or showing any degree of anger or disappointment is like hitting! Nothing good will come out of it!

The ONLY thing that works now is positivity. The only option is to be an ADVISOR to our kids. To love them. To coach them. To educate them. To explain things to them. To make them WANT to listen. To show them how it’s for their own good. To show them the joy and pleasure in Yiddishkeit. To make them want to daven, want to learn Torah, want to do mitzvos, want to eat healthy, want to clean up, want to sleep on time, want to sleep in their own beds through the night, want to think positive, want to be kind and respectful to others… and the list goes on and on.

And there is no better role model for this than our Rebbe.

The Rebbe never told anyone what to do, never scared anyone, never forced anyone. He ONLY advised us. We see this approach emphasized again and again in the Rebbe’s letters – showing how the Mitzvos are good for us, not only spiritually but also materially. He always explained how even though Torah and mitzvos are a must for their own sake, they are also the channel for all the brachos, and for a good, happy, and satisfying life.

I wish I knew the answer of how to make this all reality right now in the world at large, but I’m really excited to start by #defundingthepolice in my own home today. To remember that I am done playing policeman for good. That I am no longer ready to invest any of my energy in that direction. To remember that from now on, I am ONLY their loving, understanding, patient, and helpful, advisor and coach. That I am always on their side.

We are taught that Hashem is our shadow, and so I hope that Hashem will be our mirror and give up on using any kind of negativity on us…

And most importantly, that He will finally return our dear Rebbe – our Judge and Advisor, to us like before, in a completely revealed way for everyone, right now, BEFORE this gimmel Tammuz!