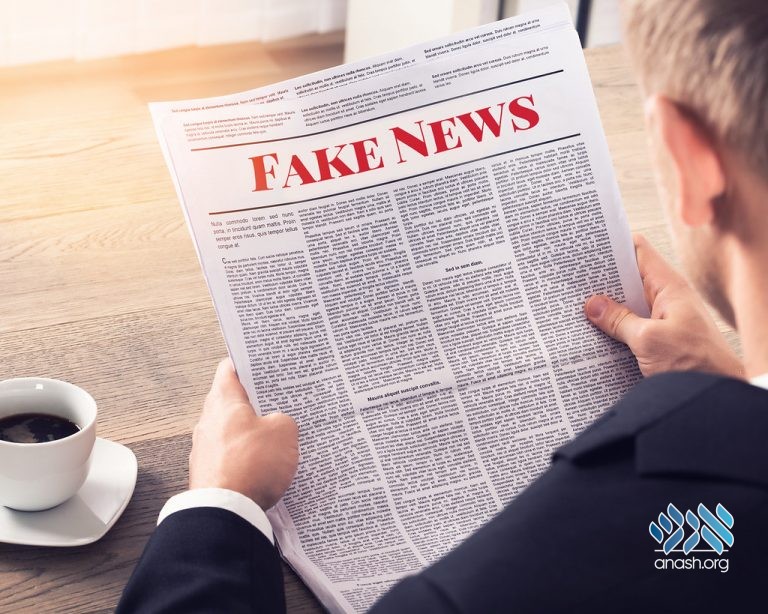 Today, we clearly see the destruction that blind faith in the media and social media can cause: hysteria, chaos, confusion, and division. But as we reflect on the destruction, it is also the best time to consider the solution.

How can it be that sinas chinam – senseless hatred – was enough to destroy the Beis Hamikdash?

Today, with what’s going on in the media, it has very quickly become a lot easier to fathom.

The Alter Rebbe explains that senseless hatred is a form of false belief.[1] The realm of holiness demands belief, even when it’s illogical. The unholy counterpart is to automatically believe negative things about others, without employing logic to analyze and question what we’re hearing. The divisiveness this leads to is truly senseless, and that is what caused the destruction of the Beis Hamikdash.

The event marking the beginning of the Three Weeks – the breaking of the Luchos – was also caused by false beliefs.

The Jewish people had just received the Torah, but when Moshe Rabeinu didn’t come down the mountain as expected, they worried. Knowing how difficult it would be to convince the newly minted nation to sin, the Satan showed them fake news: a vision of Moshe, dead. And it worked. The effect of what they saw on their “screen” was so strong, it’s described as bringing “darkness and confusion into the world.”[2]

It’s not by chance that right after this episode the Jews were commanded: elokei masecho lo sa’aseh loch, “don’t make molten gods.”[3] The word for molten, “maseicho” can also be translated as “screen.” [4] Don’t make your screen into a god. I.e., don’t believe everything you see or read.

Today, we clearly see the destruction blind faith (in the media and social media) can cause: hysteria, chaos, confusion, and division. But as we reflect on the destruction, it is also the best time to consider the solution.

In 1957, the Rebbe wrote to someone: The destruction came through senseless hate, so the antidote must come through senseless love. But how can love for our fellow Jews ever be senseless? There’s always a reason to love them! It must refer to those whom the Torah itself cautions us to exercise a measure of distance because of their wrongdoings. Even these Jews we must love “irrationally” – just because they’re Jewish.[5]

So let’s be very careful when it comes to our fellow Jews, believing the good readily and wholeheartedly, and carefully scrutinizing anything critical we may hear. We also want to maintain that scrutiny when it comes to news and media. Don’t believe everything you see or read on a screen. Instead, turn that blind belief to Hashem, His mitzvos and the coming of Moshiach. Belief of this kind will brighten and simplify our world.

May we merit to see the rebuilding of the Beis Hamikdash, and the restoration of love and harmony to the world, with the coming of Moshiach very soon.