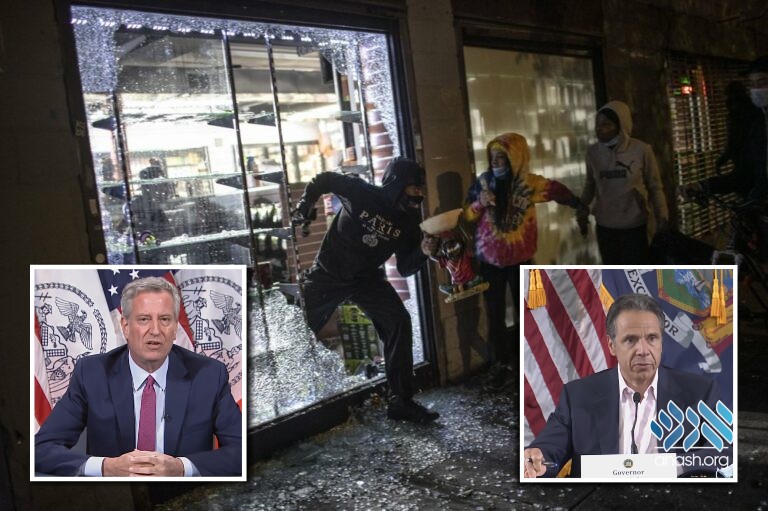 Gov. Andrew Cuomo laid the blame squarely in the hands of Mayor Bill de Blasio and the NYPD for last night’s looting and violence, saying they must “do a better job” to curb the unrest.

Gov. Andrew Cuomo said Tuesday the NYPD and Mayor de Blasio must “do a better job” at curbing looting and violence erupting amid civil unrest over police brutality against African-Americans.

“The NYPD and the mayor did not do their job last night, I believe that,” he said. “You have 38,000 NYPD people. It is the largest police department in the United States of America. Use 38,000 people and protect property.”

“I believe the mayor underestimates the scope of the problem. What happened in New York City is inexcusable,” he added.

The governor said he has offered to send in National Guard troops to assist the city, but was rebuffed by Mayor Deblasio who said he can handle it with the NYPD.

The governor also mentioned the fact that it is within his power to dismiss the mayor, yet stressed that he doesn’t see it necessary at this point.

“Legally … can you displace a mayor? Yes, a mayor can be removed,” the governor said. “It is a bizarre thing to try to do in this situation. It would make a bad situation worse. Also, I don’t think it’s necessary.”

Some observers have seen a parallel to the Crown Heights riots of 1991. It took then-Governor Mario Cuomo four days before he issued an ultimatum to Mayor David Dinkins to get the unrest under control.