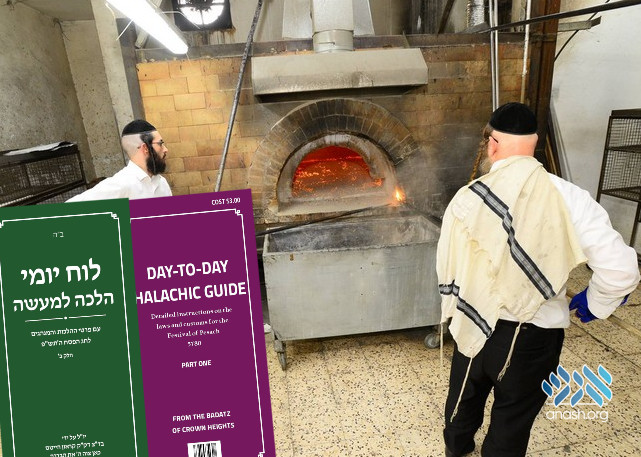 Harav Yosef Braun of the Crown Heights Beis Din published guides for Pesach in both Hebrew and English including special halachos for this year. Read or download them free.

Kashering Made Simple
By Rabbi Braun
A simple self explanatory chart which will make kashering all your kitchen utensils much easier.
Kashring Made Simple – Download
——

Is Quinoa Kosher for Pesach?

I am very confused about this. All the years I’ve heard that most poskim maintain that quinoa is considered kitniyos. Now I am hearing that there is new information on the topic and that is been agreed that it is not kitniyos.

May I use it on Pesach or not?

The common consensus of most poskim on this topic is that it is considered kitniyos for all practical purposes. The few kashrus agencies that are authorizing it are pushing this product on the market—and even they maintain that it needs a reliable proper hechsher as it might have some grain mixed into it—but that does not change the consensus within mainstream halacha.

The key argument to permit quinoa is that this is considered a new type of food which wasn’t around when the decree against kitniyos was made and thus it is not included in the original prohibition against kitniyos.

This argument has been repeated many times about different things. However, klal Yisroel has not accepted this argument. The custom is not to use peanuts, and more specifically — corn, even though these foods were not around then.

In fact, the original poskim who mentioned the prohibition against kitniyos do not list the various type of foods. The basic assumption is that anything that has the properties of kitniyos is included. Furthermore, from the extensive discussion in poskim about why potatoes are permitted on Pesach it is clear that the fact that this was a new food was not germane to the discussion.

Quinoa has all the properties of kitniyos and all the reasons mentioned in poskim apply just as much if not more to quinoa. Certainly, it has more similarity to grain than corn does.

It should be noted that even though Rabbi Moshe Feinstein has ruled to permit peanuts, he agreed that corn remains forbidden. His son Rabbi Dovid Feinstein states clearly that the same applies to quinoa. (The arguments to distinguish between corn and quinoa based on its Yiddish name and its high popularity are a far stretch and inconsistent with the position of Reb Moshe himself. It is obvious that Reb Moshe’s position to allow peanuts is not based on the sole factor of it being a new food. He explained elsewhere why corn remains forbidden because it fits well with the general criteria of kitniyos, unlike potatoes and peanuts. Accordingly, in his opinion quinoa should be forbidden. As mentioned this is also the position of his son, Reb Dovid.)

The classification of quinoa as kitniyos applies also the other areas in halacha. With regard to the rules of kilayim for example, it is clear that quinoa is considered kitniyos. There’s no reason to make any distinction when it comes to this very important minhag, which many poskim, including the Tzemach Tzedek, state that it applies even during times of hunger. A proper understanding of the Alter Rebbe words in Shulchan Aruch leads us to this conclusion too.

To the best of my knowledge this is also the position of most Chabad Rabbonim the world over. The position that quinoa is unacceptable as kitniyos is shared by many many contemporary poskim. To name just a few: Rabbi Elyashiv, Rabbi Neubort, Rabbi Shlomo Miller, Rabbi Usher Weiss, Rabbi Westheim — and many other well known kashrus agencies. (For a through treatmet of this matter, see Kovetz Etz Chaim, vol. XXVIII).

The very fact that all those who permit quinoa warn strongly to use it only if it goes through a proper certification process because of the serious concern that it might have a mixture of other grains is telling. Indeed, one of the reasons for the original prohibition against kitniyos is this very fact that it often mixes with other grain.

In conclusion: there’s no reason to change our behavior this year than all previous years. The minhag to forbid kitniyos is an important one and should not be dropped for convenience reasons, without a consensus that a particular food isn’t included. There are many other alternatives for healthy food on the market for Pesach.