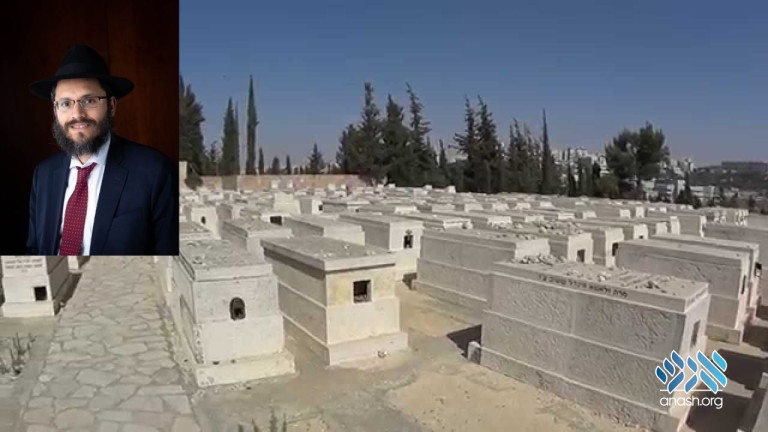 Rabbi Schneur Zalman Oirechman, shliach to Tallahassee, Florida, shares a story that happened to him recently about bringing someone to kever yisrael:

Last week, I had an important scheduled meeting elsewhere and as I was about to leave town I received a phone call from a woman I had never met. She has been living in town with her husband for many years. She was not Jewish but her husband was. She was calling to let me know that her husband was very ill, that death was imminent.  She asked that I come to say his final prayers with him. I immediately made arrangements to delay my meeting out of town to the next day and headed over to the man’s house.

The man was in a great deal of pain, was not speaking clear but was fully awake. He cried and couldn’t thank me enough for coming. I held his hand and he grabbed onto it and held it with surprising force. I kept on holding his hand as I spoke and prayed with him and I felt how much peace he was feeling as the prayers were being said. I also put Tefillin on him.

I spent about an hour with him and left asking his wife to be in touch with me and let me know any update and that I would come back to town if he passes before my scheduled returned in two days.

Before I left I asked the woman if there is any funeral arrangement made and where he would be buried, she told me that they could not afford a burial plot and that therefore he would be cremated. I told her not to worry; that I am assuming the responsibility for raising the funds for him to get a proper Jewish interment.

Then I headed out of town for a long ride into the night.

Two days later, a few hours after I returned to Tallahassee, I received a phone call from the wife informing me that he had just passed away. When I asked the woman about the burial she told me that she has a funeral home on the way to take his body to the crematorium. She told me that if I wanted to stop it I must immediately come to the house.

I had just gotten back from a long ride and it was late at night, but I immediately got dressed and went over to the house.

When I got there I spoke to her and her agnostic daughter about the importance of Jewish burial (click here to read more), that cremation causes the soul a great deal of suffering after the passing, and that the best thing they could do for their father after his passing was to give him a proper Jewish burial.

I had a long conversation with the daughter and at the end, she said something very powerful that still rings in my ears. ‘ My father’s grandfather was buried, his father was buried and therefore he should be buried as well, especially when finance is not an obstacle”.

The reason I share with you this story is twofold:

1. Our Rabbis state that a person who repents, even if he does so in the last moments of his life, the repentance is accepted. This man, unfortunately, was not very connected to his faith but had the great merit of doing so before his passing.  I thought to myself “Why wait for the end of life?  We don’t know how long we will live.”  The Rabbis said, “Repent one day before your passing and since you don’t know when you will pass, return today and every day.

2. There are many Jewish people who say that they want to be cremated when they are alive because they don’t understand or even know the impact cremation has on the soul after its passing and in the life after life. Let’s make sure we learn and read about it and ensure that our loved ones receive a proper Jewish burial after they finish their allotted days on the Earth.

May we merit the coming of Moshiach when death will disappear from the Earth and G-d will wipe away our tears. The dead will be resurrected and we will reunite with all of our righteous leaders and loved ones who are currently no longer alive.

If you would like to participate in the important mitzvah of this burial please click here to donate and write in the note ‘Met Mitzvah’ or send in a check to chabad of Tallahassee, 102 Chapel Drive, Tallahassee, Fl 32304