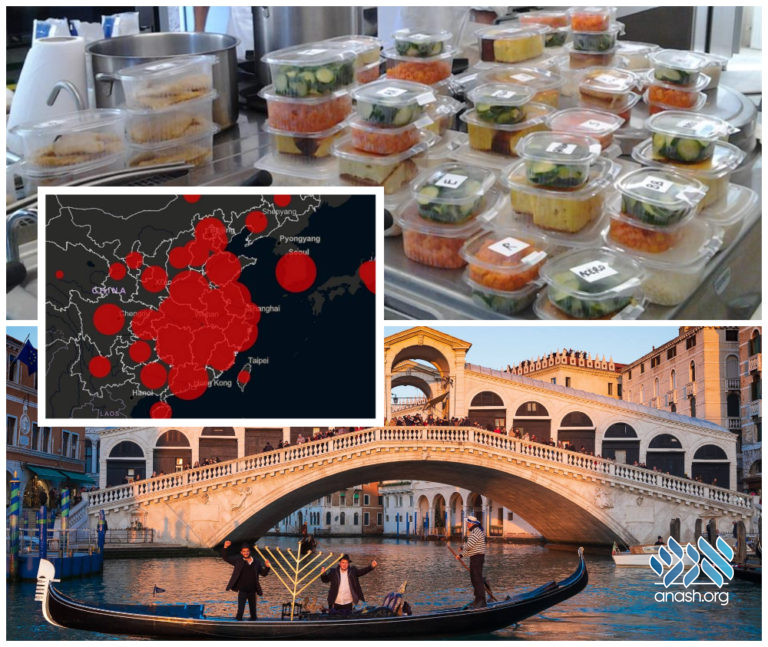 As the coronavirus spreads through Italy and schools are ordered shut, the shluchim are continuing to provide material and spiritual sustenance to the local population.

What began as pneumonia-like symptoms of a previously unknown virus in Wuhan, a city in central China, first reported on Dec. 31, has now spread globally, with more than 80,000 people infected worldwide, though the vast majority of cases are in mainland China. More than 40 countries have been reporting cases, with major outbreaks in South Korea, Italy and Iran.

In Italy, the main focus of infection in Europe, cases have spiked to 400, representing a 25 percent surge in 24 hours. The outbreak in Italy is responsible for 12 deaths, causing 11 northern Italian towns to be quarantined—restricting the movement of some 55,000 people. The cases are mostly concentrated in towns in the Lombardy region and its regional capital, Milan—home to Italy’s second-largest Jewish community of an estimated 8,000—and in the Veneto region and its regional capital, Venice, a city usually booming with Jewish tourists visiting its historic ghetto and Jewish quarter.

As authorities in the Lombardy region struggle to contain the outbreak (305 cases have been confirmed in the region), a bustling European metropolis has slowed down, with bars and cafes ordered to shut at 6 p.m. Schools, universities and theaters have also been closed, with more than 50 percent of hotel bookings canceled in Italy’s financial capital. Chabad’s day school has been closed for a week, though Chabad centers and some of the city’s other synagogues are still open. Chabad of Milan’s soup kitchen is still operating, continuing to feed Milan’s needy of all backgrounds.

“When this crisis broke out, we thought we’d have to close the soup kitchen,” says Shani Hazan, the kitchen’s director. The soup kitchen uses the school’s dual-purpose commercial kitchen, and being that the school had to close, community members were concerned the kitchen would as well. Determined that no one goes hungry, Hazan worked with the authorities to ensure the kitchen would be permitted to operate. After changing the packaging of the food delivered on Milan’s streets to a more sanitary type in order to prevent contamination, they received the go-ahead.

“As soon as we announced that we’d be open, volunteers began streaming through our doors,” says Hazan. “We just finished cooking for Shabbat, and tomorrow, we’ll be carrying out our usual Shabbat deliveries,” she says. “We’re here, and we’re continuing.”

“The situation in Milan is pretty panicked,” Rabbi Levi Hazan, youth director at Chabad-Lubavitch of Milan told Chabad.org. “Chabad is open as usual; the Jewish community announced that they would not close the shuls.” According to government regulations, synagogues aren’t considered public buildings, and as such, they may remain open. This coming Shabbat, Hazan notes, “many people will not go to shul; they’ve left the city, they went anywhere they have homes.”

The rabbi adds that “people are over-panicking a little.”

In the Veneto region, where there have been 78 cases, including four in Venice, the fragile lagoon city renowned for its history—the first complete Babylonian Talmud was printed there in the early 16th century—and old-world charm, attracting more than 30 million tourists a year, Chabad of Venice is still operating.

“The Gam Gam Kosher restaurant is open; Shabbat meals will be available,” Rabbi Ramy Banin, co-director of Chabad of Venice with his wife Shachar, says. “For the time being, things are fine, and we’re keeping our daily routine; we’re taking all necessary precautions as advised by the health department and medical professionals.” Still, he adds, the outbreak has severely impacted tourism—a key source of income in the region and a mainstay of Chabad of Venice. “Many have canceled their trips, and even the locals are tending to stay at home,” the rabbi says, noting that the financial impact of the outbreak comes just months after the Chabad center was heavily flooded. “The financial situation is very difficult now, but we’re here—staying to help whoever needs us.”

From Italy, cases have spread throughout Europe—and to Latin America, with Brazil’s first case a São Paulo man returning from Lombardy—with cases linked to Lombardy appearing in Austria, Croatia, France, Greece, Romania and several other nations. As the virus, now known as COVID-19, gains a foothold in Europe, Germany’s health minister, Jens Spahn, warned on Wednesday that the country was “at the beginning of a coronavirus epidemic” as health authorities tested dozens of people who came in contact with an infected couple.

World Health Organization officials said on Wednesday that for the first time, the number of daily cases outside China has surpassed that of the country where it began. The Centers for Disease Control and Prevention (CDC) confirmed the first domestic case in the United States without a clear link to China, with officials saying that the Solano County, Calif., man hadn’t traveled to China or had “exposure to another known patient.”

“At this time, the patient’s exposure is unknown,” the CDC said in a statement. “It’s possible this could be an instance of community spread of COVID-19, which would be the first time this has happened in the United States. Community spread means spread of an illness for which the source of infection is unknown. It’s also possible, however, that the patient may have been exposed to a returned traveler who was infected.”

In Rome, 330 miles south of Venice, people aren’t as concerned. “Some large events have been canceled,” concedes Rabbi Menachem Lazar, co-director of Chabad of Piazza Bologna, a Rome neighborhood bustling with students and tourists. “But this morning, the synagogue was full,” the rabbi says, noting that he had just finished giving a class that evening. “School is still open, though the Purim plays have been postponed.”

As Shabbat descends, Lazar says Chabad will be hosting regular Shabbat meals, though this week it will be made up of locals and students, as most tourists have canceled their trips. Chabad is keeping abreast of the developing situation in tandem with local authorities.

“We are following the recommendations of the government closely,” Lazar says.