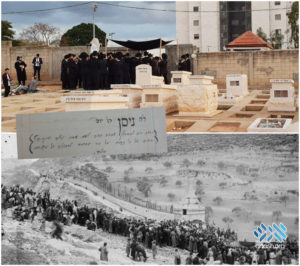 An ancient segula of holding orphans’ wedding in a cemetery was held this past week in Bnei Brak, Eretz Yisroel, in hopes of stopping the coronavirus.

The B’nei Brak cemetery was witness to a rare site this past week. A chuppa, which usually takes place by a fancy hall or a park, was held there, among rows of graves.

The cemetery wedding is an ancient segula used to ward off plagues. Two orphans would be married in a cemetery in a wedding known as a “Shvarze Chasene” or “Black Wedding” and this was considered an amulet against plagues.

The source of the segula is the year 5665, when the Yemenite community in Eretz Yisroel began to suffer from an epidemic that affected many children and kept on getting worse. The community was at a loss and sought some sort of solution.

The Ashkenazi community in Yerushalayim told them about the segula of making a chuppa for two orphans in a cemetery. Indeed, the Yemenite community arranged a chuppa in the famous Har Hazaisim cemetery, and the epidemic stopped shortly afterward. The uncommon ceremony was marked down in the community’s records books.

The reason for this segula, as found in the book “Treasure of All Customs,” is particularly empowering: It is a combination of Tzedakah, by marrying off poor orphans, and doing it in the cemetery, to show people they have no reason to fear the grave; On the contrary, everyone is dancing in the cemetery, and by lowering the fear of the plague – it helps one survive.

This past week, as coronavirus spreads around the world, the segula was once again performed in a cemetery in Eretz Yisroel, with prayers to Hashem that the virus be stopped immediately, and for the health and wellbeing of all Yidden.