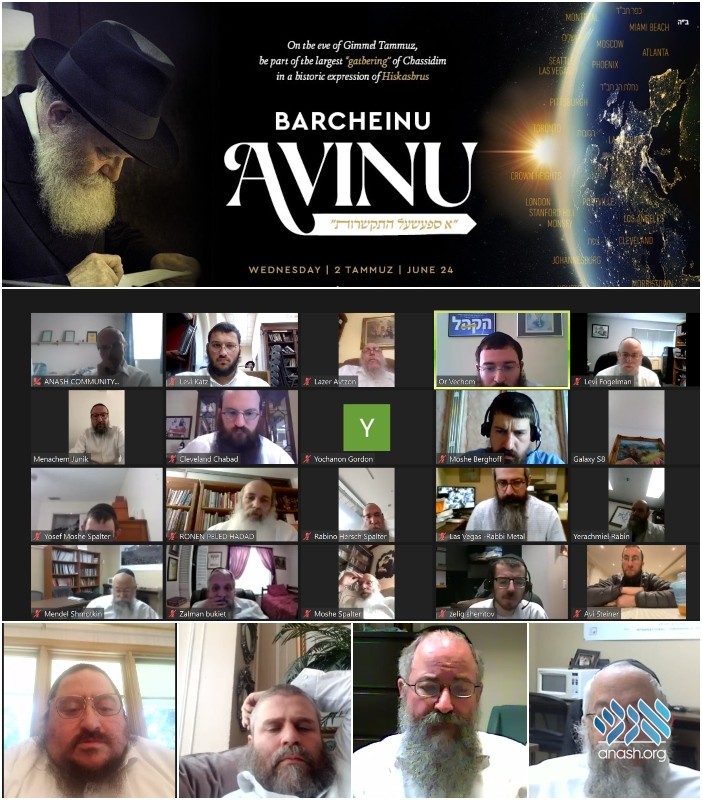 Lubavitcher communities from around the world, and tens of shuls in Crown Heights are signing up to join a special broadcast to mark the 26th hilula of the Rebbe on Gimmel Tammuz.

Lubavitch Chassidim around the world are preparing for the 26th yartzeit of the Rebbe with in-depth learning programs, expanded Mivtzoim projects and… Zoom.

With restrictions on travel around the world due to the Covid-19 pandemic, personally visiting the Rebbe’s Ohel on Gimmel Tammuz 5780 as usually done will not be possible for thousands of people.

Instead, they will be expressing their connection to the Rebbe by joining the global “Barcheinu Avinu – a special hiskashrus” broadcast coordinated by Vaad Or Vechom Hiskashrus on Wednesday, Erev Gimmel Tammuz (June 24) beginning at 2:30 PM EST.

The hour-long program which will include learning, singing niggunim and the live reading of a ‘Pan’ letter at the Ohel will be facilitated in Zoom rooms in each Chabad community in North America, Europe, Israel and South Africa.

Prior to the general state-of-the-art broadcast, many communities will hold a localized program via Zoom rooms with local speakers and personalities sharing inspiration and experiences with the Rebbe and Chabad. They will then join the global event.

“The idea for this program is to bring together all Chabad Chassidim and give them an opportunity to be part of a program that hasn’t happened since Chanukah Live with the Rebbe,” organizers say.

“What is so unique and special about this program is that it will be two-way: Each community will start at their Zoom room and then their room will connect with the global broadcast. Everyone will be able to see chassidim from around the world and be seen to chassidim around the world,” organizers said.

From around the world, they will be joined by London, Manchester, Leeds and Scotland in the United Kingdom, Paris – France, Antwerp – Belgium, Johannesburg and Cape Town in South Africa, Moscow – Russia and across the holy land of Israel.

Joining from South America will be the communities of S. Paulo and Rio de Janeiro in Brazil, Buenos Aires – Argentina, Panama City and Montevideo in Uruguay.

On Sunday, some 120 rabbis, Shluchim and representatives from many communities participated in a virtual meeting with the producer Ronen Peled and members of his team who will be facilitating the technical aspect of the hi-end broadcast.

“Besides for being as close as possible with the Rebbe – thought the learning, niggunim etc. – participants will be connecting with the Rebbe’s children, the chassidim,” they said.

For more info, visit BarchinuAvinu.com. Communities wanting to participate in an organized manner can email: info@orvechom.com