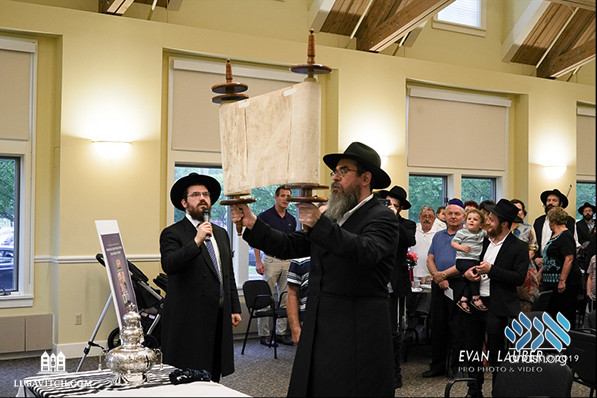 After years of waiting, an over 100-year-old Torah that was smuggled from communist Belarus finally found a home in a suburb of Albany, New York, at Chabad of Colonie.

The Torah was donated by Tony (Naftoli) and Klara German, Colonie residents. “It was through true sacrifice that Tony managed to smuggle the Torah out of the Soviet Union,” says Rabbi Mordechai Rubin, who directs Chabad of Colonie with his wife, Chana.

The Torah’s original home was in a modest shtiebel in Gomel, Belarus, where Tony’s father, Chaim, was the caretaker when the Soviets came to power. Chaim was not fully observant and his son even less so, but nevertheless, the small synagogue was dear to his heart.

The congregation was an older one, and its members slowly passed on, leaving the shtiebel empty and services suspended. Chaim, knowing the Soviets would surely confiscate the premises and discard the precious Torah, took it home and kept it reverently wrapped and safely stored.

Then Chaim fell ill. On his deathbed, he made Tony promise that if he ever made it out from behind the Iron Curtain, he wouldn’t leave the Torah behind. “Take it somewhere where people will really want it and use it,” he told Tony. Knowing full-well the dangers associated with this promise and understanding the importance of this request, Tony solemnly swore to take the Torah with him, should he ever get out.

When he did, it was 1989 and still extremely risky to smuggle a religious article out of the Soviet Union. Even knowing he and his family would likely be imprisoned for the act and lose their chance to leave altogether, he selflessly hid the Torah among his belongings to bring to America.

“I thought Judaism was over in Belarus,” he later told Rabbi Mordechai. “There was no future for the Torah there.”

Thanks to a distraction he created at the border, Tony was successful in smuggling the Torah out. He brought it with him to the Albany suburb where he settled.

It took thirty more years for him to find a proper home for the Torah. Though he did visit congregations in the area, he didn’t feel like the Torah would be treasured and used there, among the many other scrolls the synagogues already had. And so, he waited.

Then the Rubins came along. The couple moved to Colonie just a year and a half ago, and despite their growing programming, like a thriving women’s group, weekly classes, Shabbat dinners, and children’s programs, they still focus on one-on-one interactions. “We’re a small town here,” Chana says, “and slowly building up a community.” Every day, the couple goes door to door with fresh challah, meeting Jews in the area. “It’s been amazing to meet all these wonderful individuals, but we never expected to be gifted something this major.”

Rabbi Mordechai met Tony on one of his home visits. “We had a wonderful conversation,” he remembers. “I invited him to come to Shabbat dinner or services, but he politely declined. Then he told me that he has an old Torah he wanted me to see.” The rabbi expected to see a book, a worn copy of the Tanach or a Chumash, and was shocked when Tony showed him a genuine, complete Torah scroll and told him the story behind it.

“I was so touched,” Rabbi Mordechai shared with Lubavitch.com. “I was emotional hearing how this Jew, who isn’t otherwise involved with Judaism, risked his life so the Torah wouldn’t be forgotten or destroyed and could be loved and used.”

The Germans donated the scroll to the fledgling Jewish center. The Rubins restored the Torah, repairing the wear and tear, and brought it to their center in a grand celebration attended by 180 people on June 26. A silver crown was placed on the scroll, a gift from the Massry family, Colonie community activists. “This Torah, more than any Torah, embodies the message of our nation’s strength and victory in the face of oppression,” Chana said at the event. “And that is what makes this occasion truly a joyous gathering.”

Rabbi Mordechai adds, “It gave us such a boost and really solidified our roots in this town. We weren’t ready to start hosting regular services, but after receiving the Torah, it pushed us to begin.” The nascent minyan meets on special occasions, such as holidays and yahrzeits. “Tony told me that if I am ever missing a tenth man for the reading of his Torah, I should let him know, and he’ll be there to complete the minyan.”

Just before the celebration, Tony returned to Belarus for the first time since he left. He was amazed to see the Jewish revival happening in the place he thought Judaism had died. “I went to my father’s gravesite and told him I fulfilled my promise to him,” he told the Rubins. “After all these years, after all it’s been through, the Torah is in a place where it’s treasured, needed, and used.”