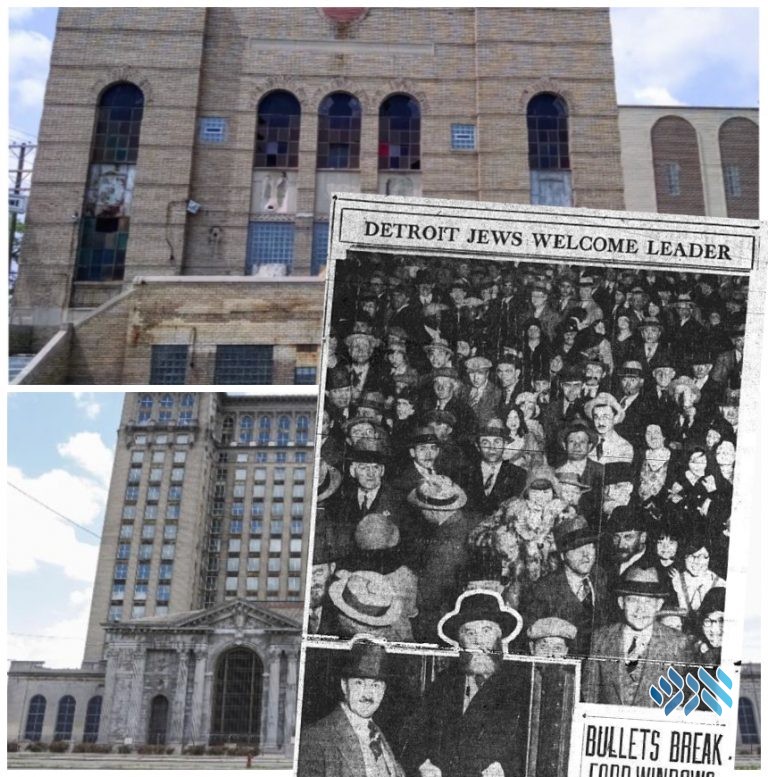 90 years ago, during a whirlwind 10-month visit to the US, the Frierdiker Rebbe spent a week in Detroit, where thousands crowded to see him.

On 29 Nissan 5690/1930 – 90 years ago today – the Frierdiker Rebbe arrived in Detroit. According to the local press, some 10,000 Jews awaited his arrival at the Michigan Central Railroad Station.

This was another stop in the whirlwind 10-month visit to the United States in which the Frierdiker Rebbe visited numerous cities and saw an innumerable amount of people in Yechidus.

In his diary, the Frierdiker Rebbe describes the kabbolas ponim at the railroad station, the ride from there to the shul, and the thousands who packed the shul to see him.

In a letter to Rebbetzin Nechama Dina, he writes:

At 4 o’clock we arrived in Detroit, the same old story — photographs, then new members of the entourage want to be in one picture…

We went in an open car, the street was full, other cars were following, police were going on their motorcycles and stopped the trolleys as usual. We went straight to a big Shul, which has 1700 seats downstairs in the men’s section, the gallery has 700 places, but they estimate there were over 3000 people.

What was interesting was the scene around the Shul, the Shul is on a corner, and the way up has many stairs. When I went up and I saw, ka”h, the crowd of thousands, I said to them “Aleychem Sholem”, and there was a huge cry, “Sholem Aleichem!”

After that, we went into the Shul where there was a large audience, and two rabbis spoke about who the L. R. (Lubavitcher Rebbe) is, what the family had accomplished. There was great respect shown by all circles of people.

In a letter dated 6 Iyar, the Frierdiker Rebbe recalls that Shabbos:

Six o’clock was already after Mincha. A large crowd gathered and I began saying the ma’amar. It was deep, but the crowd understood. Even the Misnagdishe lomdim understood and were pleased by it. It lasted for about an hour. When I was done several came into my room and thanked me.

The Rebbe’s visit was covered by both the Jewish and general press. Here is what they wrote (credit to Camp Gan Yisroel Detroit):

Detroit Jews were disappointed last Tuesday, because about 3000 Jews went to the Central Depot to welcome the Lubavitcher Rebbe, Yosef Yitzchak Schneerson shlit”a, as announced.

Due to his weakness he didn’t come, but he telegraphed, that Sunday, April 27, 4:15pm, he would definitely come.

The committee ordered a police squad on horseback to keep the peace. The march will begin exactly at 2:30 from automobiles with welcome cords marching to the Central Michigan Depot, and from the Depot to Congregation Emanuel, on Taylor and Wilson. His residence will be at Mr. Altschuler’s house, 2454 West Euclid.

The Lubavitcher Rebbe in Detroit. The Jews of Detroit have the honor that The Teacher, Tzadik, Gaon of Israel, and Kodesh Moer Hagolah R’ Yosef Yitzchak Schneersohn shlit”a the Admor of Lubavitch is coming Sunday April 27, 4:15pm to Michigan Central Station.

Due to illness the Rebbe will arrive in Detroit next Sunday, and not last Tuesday as expected.

All who wish to participate in the reception, should gather at Linwood and Davison Avenues and parade to the station. From the station the Rebbe and the committee will travel to the Shul, Taylor and Wilson St. The Rebbe’s address in Detroit will be 2454 West Euclid St.

Sunday April 27, 4:20pm, with a crowd of many thousands, with thousands of cars decorated with Jewish and American flags, the Jews of Detroit merited to meet and greet the great Tzadik Adonenu Morenu Horav HaTzadik Maran Yosef Yitzchak Schneerson, who arrived from Chicago escorted by his well-known son-in-law R. Shmaryah Gur-Aryeh, Rabbi Elkin from Chicago, and his private Secretary, Rabbi Havlin. A special committee of representatives from the Chicago Jewish community escorted the Rebbe to Detroit, e.g. Shlomele Palmer, Rabbi Feigen, Rabbi Avraham Raskin, and others.

The Detroit committee with the president of the Delmar Street Shul Mr. Glist at the head, did their best to give an appropriate reception, and they accomplished it all with aplomb. From the station they traveled to the Emanuel Shul – Taylor Street – which was filled to the max, and a large police squad had to keep the peace. The atmosphere in Shul was “Kulo Kodesh”. On the Bimah sat the

Rebbe and on one side his son-in-law, Rabbi Gur-Aryeh, and on the other side Rabbi Ashinski. Also sitting with them were the rabbis: Ashishkin, Fine, Horwitz, Stalman, Fischer, Shtraus, Elkin, Hevelin, Feigin, Chazan Zaludkowski, and a few other rabbis and distinguished lay leaders.

The Lubavitcher Rebbe, who has been in the country for several months, and has already visited a series of cities, where he has been received with enthusiasm by thousands of his Hassidim, expressed today for the first time his opinion regarding his impressions regarding American Jews.

The Lubavitcher Rebbe explained, that it’s hard for him, who is used to spending his time learning and writing, to accustom himself to the manner in which American Jews live and behave.

Although there was little time to advertise it, and only two days to make arrangements, nevertheless, the mass gathering in Delmar Shul turned out to be a smashing success.

This shows again how beloved and popular the Lubavitcher Rebbe is among the people.

The Shul was packed, and everything was in order. When the appeal took place for the Rebbe’s Torah institutions, the audience responded with incredible enthusiasm, so that in a short time over 800 dollars was collected.

In the role of Chairman was Mr. Glist, the untiring worker. In a short speech, he introduced Rabbi Elkin from Chicago. The distinguished Rabbi spoke very enthusiastically and made a deep impression. Then Rabbi Fischer spoke, the rabbi of the Hungarian community — his speech was outstanding in its tact and logic. All present listened with pleasure.

Rabbi Stolman then rose to the platform, and with touching words described the situation of Torah learners in the “deep mire”, and he appealed to the gathered to respond with donations.

The distinguished Rabbi’s words made the right sort of impression. Those gathered began to pour forth money, from all around outstretched hands waited for their donations to be taken. And in quite a short time, a sum of no less than 800 dollars was collected.

Rabbi Fein then took the stage, and in fitting words introduced the Lubavitcher Rebbe. Rabbi Fein knows the Rebbe back from Russia, and he had interesting things to say about the matter.

When the figure of the Lubavitcher Rebbe appeared, it was as if the whole Shul was electrified, everyone rose from their seats as one. And when he began to speak, there reigned an absolute silence, so that one could hear a pin drop.

The following is a list of locations that the Frierdiker Rebbe visited:

Start: Davison to Linwood to Helmurst to Dexter to Chicago to LaSalle to Grand Boulevard to Vernor Highway to Depot