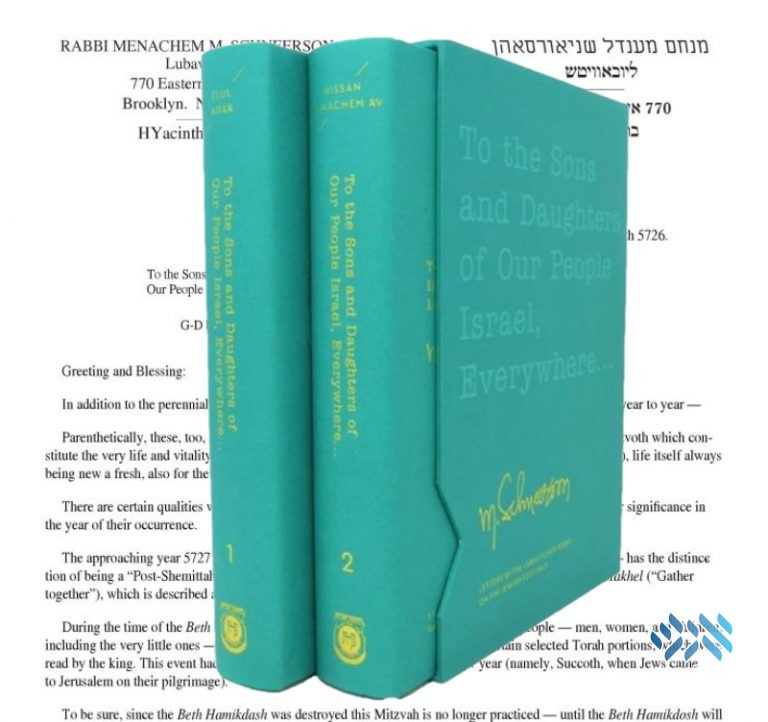 A collection of the Rebbe’s michtavim klaliim in English was published for the first time by the Kehot Publication Society in a two-volume annotated compilation.

The new publication is now available for purchase at Seforimdeals.com. Free delivery in Crown Heights on orders over $49 to be delivered before Shavuos.

“To the Sons and Daughters of Our People of Israel, Everywhere.”

It was with these words that the Rebbe began his public letters, which were transcribed and published before major Jewish holidays each year. These letters, known as michtavim klaliim (“general letters”), would set the tone for the upcoming holiday. In them, the Rebbe discussed the spiritual meaning of the upcoming holiday, the obligations and opportunities of the season, and the every-day life lessons to be drawn both by the individual and the Jewish people as a whole.

Now, for the first time, these collected letters have been published by the Kehot Publication Society in a two-volume annotated compilation entitled To the Sons and Daughters of Our People Israel, Everywhere–Letters by the Lubavitcher Rebbe on the Jewish Festivals. While these public letters were written over a span of four decades, their lessons remain timeless and wisdom immediately relevant for today’s world.

Even in comparison with the Rebbe’s unparalleled body of teachings, the content and style of his public letters were unique. As spelled out in the addressee line of each letter, the messages were universal, meant to be applicable to any Jew, at any age or stage, wherever he or she might be. At the same time, the letters were uniquely personal, with anyone able to discover their own individual message. The layperson might be swept into the spirit of the holiday with the lucidly expressed ideas, while at the same time the Torah scholar could delight in the novella in Talmud and Chassidus expressed in a few concise words in the footnotes. The individual of action is motivated by the call for the practical deed.

The Rebbe himself expressed this point, once writing to a petitioner who had complained that his letters had not yet been responded to “I wrote to you many times throughout the year … by way of the letters which begin ‘To the Sons and Daughters of Our People Israel, Everywhere,’” conveying that the ‘general letters’ were not meant as circulars, but rather as personal letters to each Jew.

The Rebbe’s messages were timely and forward-looking, always underlining the innate power and strength of the Jewish soul and people to overcome whatever obstacles lay ahead. In his letter prior to the holiday of Shavuot, 1983, the Rebbe describes—with the help of 34 scholarly footnotes—the many preparatory steps taken by the Jewish people before they could accept the Torah at Mount Sinai. Each year on the holiday, the Jewish people once again accept that same Torah from G‑d, and thus the weeks and days prior must be used to prepare for the lofty event. This may seem daunting, the Rebbe acknowledges, but it is entirely within the Jewish people’s abilities.

“ … [S]ince our Torah, the Torah of Truth, states that the Holy One, blessed is He, only demands that which is in man’s capability (and not beyond his capabilities), He has definitely given every individual all the capabilities … to accomplish all this … ,” he writes. Harnessing the deep, innate connectivity with G‑d inherent within each Jew, all that “is incumbent upon the individual is merely to bring it from the potential to the actual.”

Although a collection of Hebrew translations was published in 1994, and the Yiddish originals can be found in the appendixes to the 39-volume Likkutei Sichos, the English translations were never previously published together, nor even fully catalogued. Over a period of more than eight years, the team at Kehot spent hundreds of hours tracking down the more than 200 letters, searching libraries, news archives and personal collections. They were ultimately successful at finding every letter. Additionally, a small minority currently thought to have never before appeared in English were translated by the Kehot editorial team.

The letters generally follow a rhythm. A short introduction is followed by a query about the holiday. This leads into the theme and focal point of the letter, introducing a new aspect of the holiday—making the festival no longer a celebration of the past, but rather an experience for today to be lived and cherished.

The letters were originally penned in Yiddish, or in the rare exception, in Hebrew. Yet, in keeping with the salutation, the letters were then translated into English and other languages to reach “the sons and daughters of our people Israel everywhere.” The English translations were also precise, prepared under the Rebbe’s guidance, and he frequently changed words, phrases or nuances in the translation to have it fully align with the original Yiddish message.