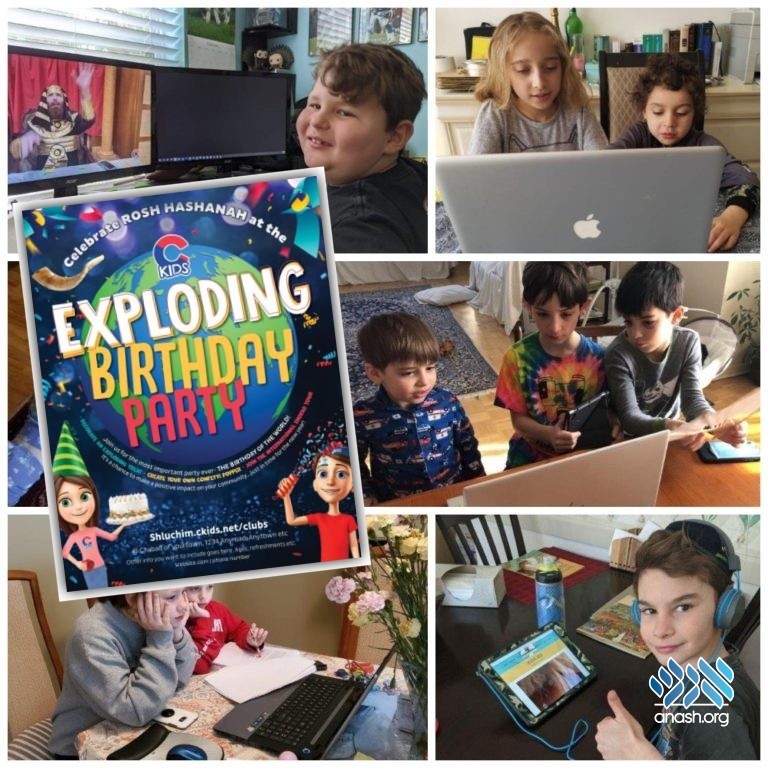 CKids chapters will be bringing the meaning of Rosh Hashana using an ‘explosive’ birthday party theme, and by accepting positive resolutions for the new year.

That’s what CKids Clubs is calling their pre-Rosh Hashanah, socially distant or virtual event that will be taking place at local chapters worldwide—the first of eight this year.

“We’ve done two other virtual events, one before Pesach and one for Lag B’Omer,” says director Zalman Loewenthal. The CKids Clubs have been a staple at over 200 Chabad Houses for four years now, bringing positive Jewish experiences to Jewish children who may not otherwise have the opportunity. This year, they’ve adapted the program to adhere to COVID-19 restrictions by providing the option to send Club Boxes to do at home or in socially distant settings. “We are proud to be able to continue providing quality resources to CKids chapters even now.”

Not only are the clubs still on, says Mrs. Sheva Rapoport of CKids, the individualized boxes bring a more personal experience to each child. “They get to bring the messages home and share it with their families. It becomes something that isn’t just done at the Chabad House but infuses the children’s personal spaces and daily routines.”

CKids Club pairs with the CKids Brigade of Tzivos Hashem. An online platform that allows the shluchim and children to remain connected and interact even when physically separate. Besides the virtual events and extra video content that can be accessed through the platform, ‘missions’ can be accounted for and points exchanged for prizes in a user-friendly way.

Children receive custom medals and grow in rank to keep motivated throughout the year.

As the title suggests, explosions are on the schedule for the next club. After a video presentation teaching about the meaning of Rosh Hashanah and its significance as the world’s birthday, the children will be making treats with candy hidden inside that will burst with flavor when eaten. They’ll also be taking on resolutions—a birthday gift to the world—and writing them on capsules to be inserted into confetti poppers and jointly exploded for a grand reveal.

A video tour around the world will introduce children to notable people who have impacted (think: exploded) their communities in positive ways—people like Rabbi Danny Cohen, who serves Israeli soldiers in Chevron, and Nick Lowinger, whose small bar mitzvah project burgeoned into a global organization that donates shoes to homeless kids. “The goal is for the children to see how a small idea can explode into something that impacts their communities,” says Mrs. Bracha Jurkowitz of CKids.

Future clubs include a lesson on kosher and an activity to design a kosher restaurant, sculpting menorahs before Chanukah, and creating hammered copper seder plates before Pesach. Every session includes games, videos, lessons and crafts. “CKids’ events have always been fun, creative and full of toichen—and their virtual ones are no different,” says Mrs. Chanie Katzman, of Chabad of Staten Island. “They’re all done very professionally with superb marketing and original ideas that I would never have the time or creativity to put together myself.”

“It’s important to make the yomim tovim relevant to children—and that can be a challenge to do in a couple of hours and without the benefits of being in the same physical space,” says Rabbi Moshe Kotlarsky, Vice Chairman of Merkos L’inyonei Chinuch. “This program teaches the timely lessons and messages in a fun, exciting and, most importantly, safe manner that will help them remember it far into the future.”