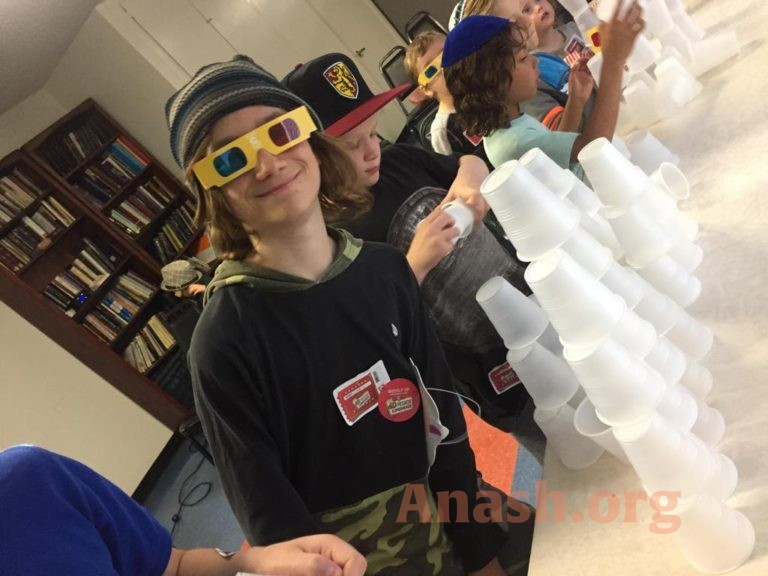 Thousands of children, from Denmark to Hong Kong, felt what it was like to leave Mitzrayim.

Just this past week, CKids – the worldwide children’s organization for Chabad Houses – put an entirely new spin on the famous directive to view ourselves as if we had been personally freed from slavery in Mitzrayim. 180 Chabad Houses around the world, from Denmark in the west to Hong Kong in the east, have been taking part in the 4D Pesach Experience, a “club” created by CKids, a branch of Merkos 302.

The 4D Pesach Experience is a unique chance for Chabad Houses to give their children a true taste of Mitzrayim. As the name suggests, the program blends learning through seeing, hearing, feeling, and doing, in an aim to give kids an interactive way of understanding the history of Pesach.

“When kids use all their senses to learn, they take everything in on a much deeper level,” remarked Rabbi Moshe Kotlarsky, Vice-Chairman of Merkos L’Inyonei Chinuch. “They come closer to appreciating the suffering of their ancestors in Mitzrayim; they are awed at the open miracles that Hashem made. And when they finally sit down at a Seder on Pesach, it’s much more than just a commemoration of the past — it’s something that they can truly feel and understand.”

The activities of the program revolve around a 3D video called Exodus, which takes children back in time to the height of the Jewish enslavement. They watch as the Jews work tirelessly under the sweltering Egyptian sun with only the crack of a whip as payment. Instructions are shown on the screen mid-video, informing the children watching to race and create pyramids of their own out of cups, while ‘Egyptian taskmasters’ (supervisors) oversee them.

After completing their pyramids, children return to the story. Paraoh refuses to free the Jews from slavery, and G-d sends the Ten Plagues upon the Mitzriyim. To take the video to the immersive 4D level, supervisors bring these plagues to life in the audience, scattering plastic frogs, wearing animal masks and roaring around the room, handing out red punch to represent the blood, and more.

During the video, kids participate in other activities, such as a “Who let the frogs out?” dance and a treasure hunt in complete darkness, before finally witnessing the Exodus of the Jewish People from Egypt. But there is be one final hurdle for everyone to pass — Red Sea Limbo. After the program, the 4D Pesach Experience features a photo booth with a Pesach-themed backdrop, where kids can take home their own pictures.