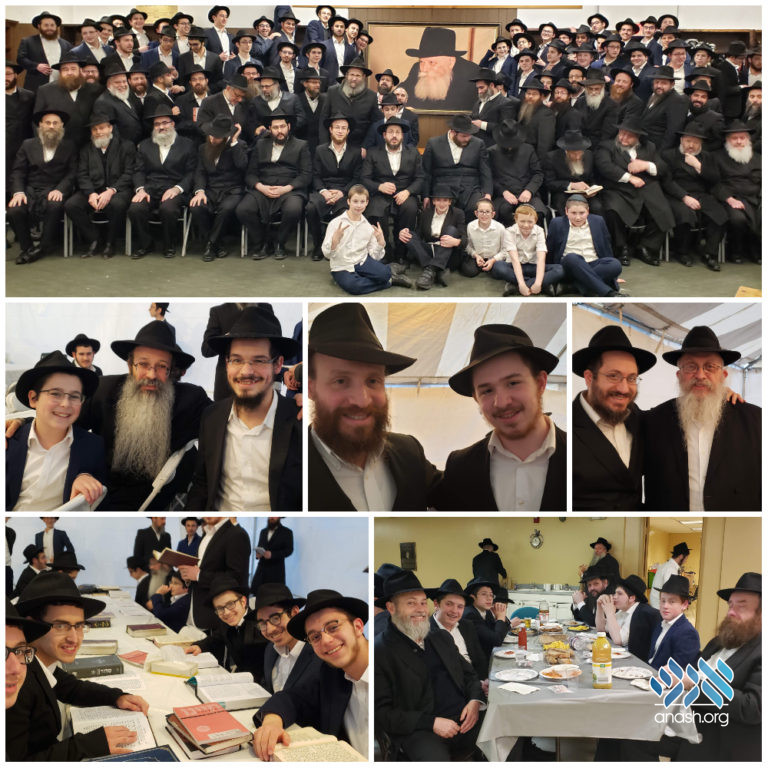 Over 50 fathers from across the US and Canada arrived at Yeshivas Lubavitch Cincinnati this past Shabbos for their annual “Father and Son” Shabbos.

Shabbos Parshas Teruma 5780, over 50 fathers from across the US and Canada arrived at Yeshivas Lubavitch Cincinnati for their annual “Father and Son” Shabbos.

The fathers were greeted with a custom-designed welcome bag with information regarding the Shabbos schedule and program. The yeshivah is immensely grateful for the generous warmth and hospitality of the local community of Cincinnati, who hosted the many fathers who came.

The Yeshiva also “welcomed” the new bookshelves, and over 100 sefarim, that were donated by Rabbi Moshe Dovid Wolf (Chicago), from the Vaad of the Yeshiva, who also came for Shabbas.

The Shabbos weekend began with very lebedike “Adar dancing” on Thursday night. It continued with Friday morning Shacharis in the Beis Midrash. After davening and a delicious breakfast, they all participated in a captivating shiur on the topic of Purim in the Torah of Rebbe’s father by Rabbi Eliyahu Simpson, the yeshivah’s senior maggid shiur. The parents then went to their host families and many then went out with their sons on mivtzoim.

The Yeshiva set-up a large tent for this special Shabbas. As Shabbos came in, the fathers partook in one of the most treasured moments of this Shabbos: learning the Rebbe’s Torah together with their sons. This was followed by a heartwarming seder niggunim led by Rabbi Levi Simpson, mashpiah and maggid shiur in yeshivah.

After kabolas Shabbos in the tent, the fathers and sons took their seats in the Beis Midrash, specially set-up for the occasion under the direction of the Menahel Gashmi, Rabbi Eliyahu Morrison. The yeshivah extends heartfelt thanks to Rabbi Morrison for his great dedication and involvement in general, with extra appreciation for his attentive efforts toward making this Shabbos event successful.

Per yeshiva tradition, the temimim, their fathers, and anash farbrenged together at length after the seudah, completing the evening’s program. The seudah was also the Sholom Zachar for the newborn son of Rabbi and Mrs. Levi fuss, Mashpia in Yeshiva.

On Shabbos morning, Chaver Hanhalla Rabbi Shmuel Granovetter, gave a special shiur Chassidus on the famous Maamer of Purim 5713. Following Shacharis, which included a strong chinuch-drasha by the Rosh Yeshiva Rabbi Gershon Avtzon, all the fathers and sons joined together for a Shabbos seudah with the fathers’ host families. After mincha, there was a special farbrengen in the tent with Rabbi Aharon Ginsberg, shliach of the Rebbe to Boro Park. The farbrengen was followed by Maariv, a video of the Rebbe and a special “Fathers and Sons” photograph.

Later that evening, a special Melave Malkah seudah took place in the yeshivah’s Boymel Rabbinical College. This was the highlight of the weekend when the Temimim were recognized for their special learning accomplishments. Hatamim Shmaya Teitelbaum (Montreal) made a Siyum on the entire Sefer Hasichos. The following Talmidim of Shiur Gimmel – hatamim: Berel Pape, Yanky Dalfin, Ari Brod, Schneur Elkayam, Daniel Namdar, and Tzvi Levitin were recognized for the accomplishment of learning every Masechta (winter and summer) that they learned in Yeshiva Baal Peh! Berel Pape was also recognized for learning the entire Likkutei Amarim by heart!

Special moments of the Melava Malka, was the reading of the proclamation, signed by the Mayor of Cincinnati, declaring 11 Nissan – Education day in Cincinnati. Rabbi Mordechai Kaplan, mashpia of the Yeshiva, was recognized for his years of dedication to the Yeshiva, with a Megilla for the upcoming Yom-Tov of Purim.

On Sunday morning there was a chinuch seminar for the fathers, led by the Menahel of the yeshivah, Rabbi Menachem Benarousse. Later in the day, fathers had the opportunity to meet privately with the teachers to discuss their sons’ progress and growth.

A special thank you to Mendy Ginsburg, an alumnus of the Yeshiva-  as well as the dedicated Talmidei Hashluchim –  for being involved in the presentation of the weekend.

The weekend concluded with parents, bochurim, and hanhalah alike inspired and energized to fulfill the Rebbe’s shlichus “to be mekabel p’nei Moshiach tzidkeinu bepo’el mamash!”