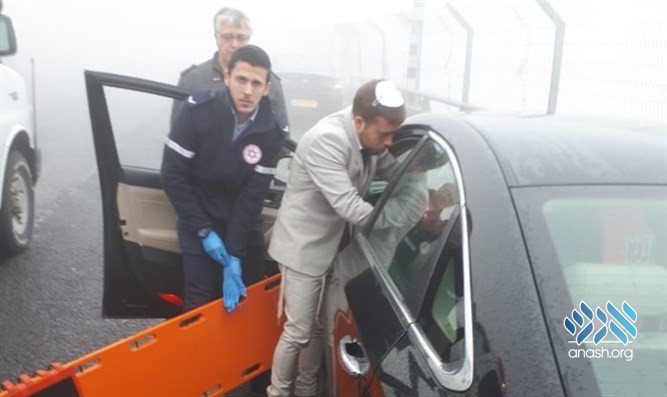 While travelling to his own wedding, Israeli medic Mordechai Avot saw two cars involved in an accident- and stopped to help.

JERUSALEM (VINnews) — An Israeli medic spent the day of his wedding in an unusual manner. While travelling to his own wedding, he stopped to treat accident victims.

Mordechai Avot, 22, of Tzfat, was driving to his wedding together with his friend, after visiting Uman. While on the way, they noticed 2 vehicles that were involved in a car accident.

Mordechai, who was dressed up for his wedding, jumped out of the car together with his friend, and began providing first aid to the victims.

“The road conditions and visibility were very difficult, and the treatment was done under challenging conditions, under heavy fog,” said Mordechai. “When I noticed the accident, I operated automatically, ran to help the injured and did not think about the groom’s suit I was wearing. We administered first aid, and an ambulance soon came to evacuate the two, who were lightly injured, to the hospital.”

While providing medical attention, Mordechai also diverted traffic away from the scene, to avoid another accident. “It was important to signal to drivers that there was a hazard along the way,” Mordechai explained. “We, as MDA workers, are always prepared and will always administer aid, anywhere and at any time.”

One of the victims of the accident reached out to Mordechai the next day, to congratulate him, and to request a meeting to thank him personally.