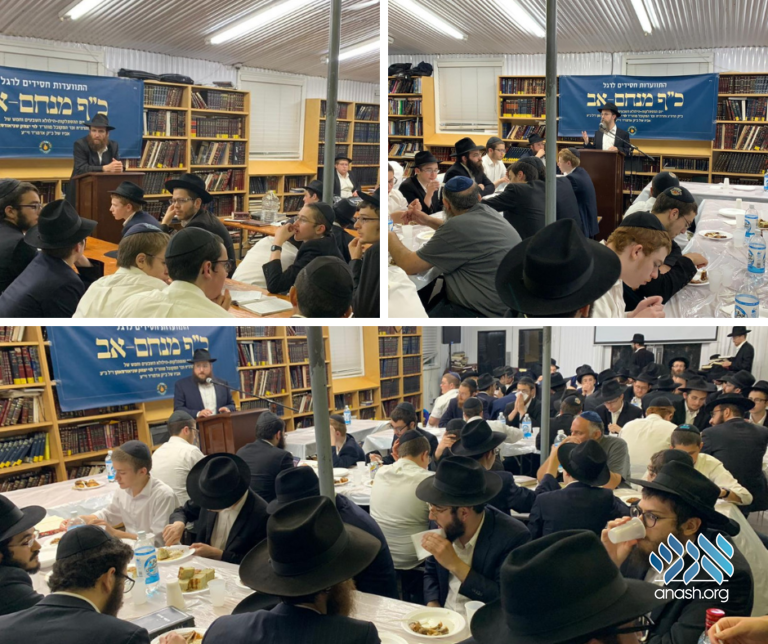 75 years of Chof Av was marked with hundreds gathered by the Ohel to spend the special day near the Rebbe.

Following Mincha at 7:30, Rabbi Yisroel Shimon Kalmenson gave a shiur in the Torah of the Rebbe’s father. At 9:00 the Farbrengen arranged by Vaad Or Vechom Hahiskashrus started with over 1,200 joining live online.

You can watch a replay of the Farbrengen here.

Here are a few highlights of the Farbrengen:

Rabbi Yosef Chaim Kantor shared his experience coming to the Rebbe for Chof Av with Camp Gan Yisroel – Parksville as head counselor in the years 5750 and 5751 (min 59). Chof Av 5750 was on Shabbos and he described how the Rebbe spoke directly to the campers during the Farbrengen and encouraged them very joyfully during the Nigunim. The simplistic devotion the campers showed to the Rebbe and how uplifted they were from the Rebbe’s encouragement and the love the Rebbe showed them, stayed with him to this day.

In 5751, Chof Av was a weekday and he could not remember anything specific being so busy directing the camp, but a few weeks later during a rally at the end of camp he recalled going together with the other head counselors Yossi Chadokov, and Dovid Shputz to give the Rebbe the letters from all the camper as well as an album from camp and to get dimes from the Rebbe to distribute to the campers. The Rebbe smiled to each of them very broadly and told him “זען נעמען פאר זיך אויך” which he took to mean that one needs to be sure to be present at the Rebbe in addition to taking care of the children.

Rabbi Kantor’s words were especially meaningful for the many bochurim participating in the Farbrengen who have just recently come back from camp.

Rabbi Yossi Kamman shared a Torah from the Rebbe’s father as per the Rebbe’s Hora’ah and encouraged all participants to fulfill the other directive of the Rebbe, to give Tzedakah to Keren Levi Yitzchak which supports schools teaching Limudei Kodesh. He also shared the fascinating origin story of the Keren (min 55): A mother of a large family received a long awaited back paycheck from the school she worked in for the amount of $4,000 ($40,000 in today’s value) and gave it to the Rebbe. The Rebbe said that this money was given wholeheartedly while the family could have used it themselves, as they did not even have a savings account. The Rebbe used that money to establish a fund to support devoted teachers and schools teaching Limudei Kodesh, and urged that everyone donate with similar self sacrifice.

Watch a full reply of the farbrengen below.