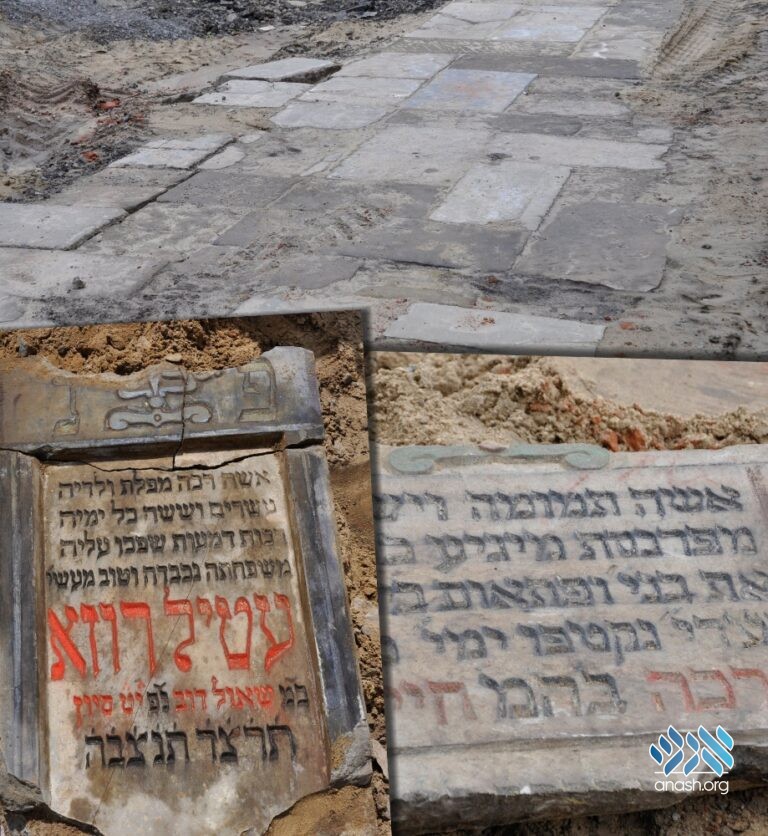 Over 150 Jewish tombstones were unearthed from under a paved road during construction in the market square of Leżajsk (Lizhensk), the largest such discovery in Poland for many years.

Over 150 Jewish tombstones have been unearthed during construction in the market square of Leżajsk (Lizhensk), the largest such discovery in Poland for many years.

Before the Holocaust, the Polish town had a large Jewish population and became an important site for Chassidim. During and after the war, with Jews expelled, ghettoized or murdered, gravestones were taken from the Jewish cemetery to be used in construction.

The gravestones now discovered under the square were used by the Germans when laying a road. They have been gradually uncovered over recent weeks, after renovation works begun in early June, reports Gazeta Wyborcza.

The tombstones had been buried below a layer of sand, brick and asphalt along a 30-metre stretch of road. As a result, many have been better conserved than the surviving tombstones at the local Jewish cemetery, with lively colors and relief ornaments.

Almost one hundred of the matzevot are mostly intact, often with just their curved tops hewn off to allow for tighter placement side-by-side. Another fifty had been cut into smaller pieces and spread out. It is likely that more will be discovered.

“No one had expected such an number. There are over 150 and not all of them have yet been removed,” Ewa Kędzierska, an archaeologist overseeing the works, told Gazeta Wyborcza.

In the interwar period, Leżajsk’s Jews made up around one third of the town’s population, numbering between 1,500 and 2,000. Previously, in the nineteenth century, the Jewish community had been even larger. During the war, Jew were expelled or murdered, with only 33 returning afterwards.

Leżajsk also became a major centre for Chassidus, with virtually any chossid around the globe recognizing the name of the town due to Reb Elimelech of Lizhensk, one of the most important figures in the early years of Chassidus.

The age and ownership of the gravestones is yet to be determined, as they await further research and translation of the Yiddish inscriptions, says Kędzierska.

From 1940-41, the German occupiers paved the market using bricks from the town’s demolished synagogue and two bombed-out buildings. When they ran out of material, they began using gravestones from the Jewish cemetary, reports Gazeta Wyborcza.

During the recent renovation work, an elderly man approached the archaeologists and said that “he remembered when the matzevot were brought to the market in carts”, Kędzierska told the newspaper.

She also noted that it was not only the Germans that used Jewish tombstones for construction, but also local Polish residents, both during and after the war.

The town’s authorities have, for now, secured and stored the unearthed tombstones, and a decision on what to do with them next will be taken in consultation with Jewish religious authorities.

Filip Szczepański from the Rabbinical Commission for Cemeteries, which operates under the authority of the chief rabbi of Poland, tells Gazeta Wyborcza that, according to Jewish tradition, tombstones belong to the deceased, and therefore should not be placed in a museum.

“It is best if they return to the Jewish cemetery they come from,” says Szczepański.