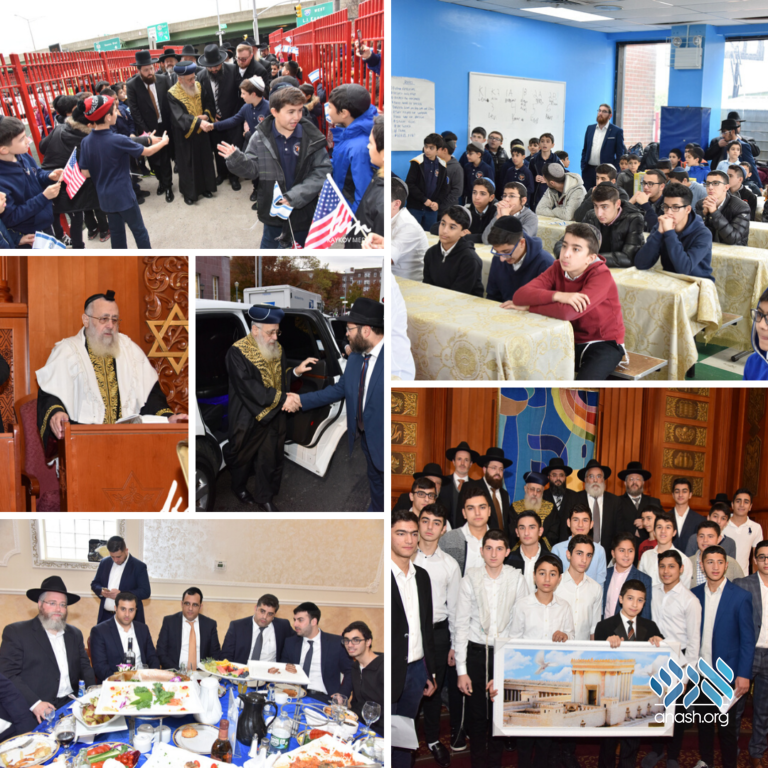 Yesterday, the largest and most prominent Bukharian Jewish community in the United States, under the leadership of Rabbi Zalman Zvulonov and Rabbi Yitzchok Wolowik hosted the Chief Rabbi of Israel, Rishon Letzion Rabbi Yitzchak Yosef.

The visit began with Shacharis in the community’s beautiful Shul, followed by a special Siyum presented by members of the center’s youth. In the afternoon, hundreds of excited students of the “Ohr Avner & Chana” schools in Queens founded by billionaire and philanthropist R’ Lev Leviev greeted the Chief Rabbi. A poignant moment was felt during the Chief Rabbi’s visit to the Rebbe’s Ohel, following which he asked to transmit a message of encouragement to the Rebbe’s Shluchim throughout the world, who will be visiting in exactly two weeks.

The morning chill of Cheshvan welcomes us. The streets of Queens are silent; it is a Municipal Election Day and many are still in their homes. From every direction, teenagers and young working men, business owners and successful entrepreneurs are seen rushing with their tallis and tefillin tucked under their arm toward the Bukharian Jewish Community Center on 70th Avenue.

The magnificent three-story synagogue located in the heart of the BJCC complex is filling up quickly. Everyone stands ready for the entry of the Rishon Letzion, Chief Rabbi of Israel and President of the Chief Rabbinate, Rabbi Yitzchak Yosef Shlita, who has arrived for a special visit to the community. The leaders of the center, a beacon of Torah and holiness to the Bukharian community throughout the United States and Canada, are Shluchim Rabbi Zalman Zvulonov and Rabbi Yitzchok Wolowik, who masterfully guide the day’s events. They greet the distinguished guest and accompany him through the entrance, which is decorated with a large “Baruch Habah” poster.

Lay leaders and rabbis, Rabbonim, Rosh Yeshivahs and heads of educational institutions from around the area have also arrived on this morning, to show their respect for the honored guests from the Holy Land. After the melodious morning prayers according to Bukharian tradition, a group of young boys ascend the podium and conduct a Siyum on Maseches Midos, which they studied diligently during the summer months at the expense of their vacation time.

In his talk to the participants at the end of the service, the rabbi expresses his pleasure at this sight of young boys who make the choice to spend their days studying Torah, under the guidance of youth director Rabbi Asher Venkin. After his warm words of greeting, he encourages the enraptured crowd to devote time to the study of practical Halacha, for the benefit of themselves and their family members.

A splendid breakfast reception in one of the Shul’s halls is by invitation only, for community leaders, Bukharian rabbis from throughout the United States and Canada, rabbis and rosh yeshivas from the New York area, and philanthropists and lay leaders who support the center’s activities all year round.

Opening remarks are presented by Bukharian Chief Rabbi Baruch Babaev, followed by a Dvar Torah by the community’s Av Beis Din Rabbi Shlomo Rubin and a speech by the chief rabbi of Beer Sheva, Rabbi Yehuda Deri. Afterwards, everyone listened intently to the address of the Rishon Letzion, who includes stories with personal lessons, memories of his father, Rabbi Ovadiah Yosef, and praises for “one of the great men of the generation, who merited to enliven Torah Judaism in Israel, in the former Soviet Union, and the United States and Canada,” the president and patron of the community, Reb Lev Leviev.

From the Jewish Community Center, the distinguished entourage proceeds to a special and historic visit to the educational empire of the “Or Avner & Chana” schools, founded by Reb Lev Leviev in memory of his parents. In buildings scattered throughout the New York borough that contains most of the Bukharian community, hundreds of students, boys and girls, are imbibed each day with Torah learning and fear of Heaven, raising generations of children who are proud of their heritage and cherish the Jewish tradition.

The first visit is to the Talmud Torah and high school for boys. The excited children listening attentively to the rabbi’s words, which are translated into English by the teaching staff. He tells them about a meeting he had with Russian President Mr. Vladimir Putin, along with Russian Chief Rabbi Berl Lazar. The President presented a challenging question to them: How the Jewish people survived all the revolutions and persecutions they endured, while Egypt, Greece, Rome are all extinct? Even before the rabbis considered how to respond, the president replied: “The Jewish people survived thanks to the Torah, and thanks to the rabbis who instill the Torah in their students from generation to generation.”

During the special address to girls high school, the excitement on the faces of teachers and administrators is evident, as he encourages girls to strive to establish an observant home, to marry a Torah scholar, and at the very least, to devote time each morning and evening to Torah study. In the corridor, he passes by a giant picture of the Rebbe speaking with the patron of the institution, Lev Leviev, wishing him many blessings. The result of these blessings can be seen on the bright and happy faces of the students, the future generation of the community who receive their foundation in Judaism here at this institution.

The entourage of the Rishon Letzion now proceeds to the Rebbe’s Ohel, upon request of the distinguished guest, to pray for the merit of the people of Israel and the Land of Israel. Many visitors gather around him upon his entrance and exit, and he greets everyone graciously. Upon arrival, he is welcomed by the Shliach and director of Ohel Chabad Lubavitch, Rabbi Abba Refson, and he inquires whether there is a synagogue at the center. He is surprised to hear that there are four mikvahs, a Yeshiva, Kolel, Talmud Torah, about twenty permanent ‘hospitality’ buildings, and a 24-hour active visitor center.

The shluchim and rabbis accompanying him point out the centrality of the location for Chabad Chassidim and the Jewish world, who flock to the Ohel en mass at all hours of the day and night. He is also interested in knowing when the tent was erected, what the Rebbe’s personal conduct was when he visited, where Rebbetzin Chaya Mushka is buried, and how often the Rebbe would come.

With trepidation, he and his companions enter the Ohel. Those present move aside to allow him passage, and the rabbi focuses on his Tehillim, reciting a silent prayer for several minutes. Leaving the venue, still under the impression of the Rebbe’s presence, he asks for a few words. The entourage pauses at the end of the cemetery, and the rabbi conveys a heartfelt message to the thousands of Shluchim who will arrive in two weeks’ time for the International Kinus Hashluchim:

“From this place, I want to extend my wishes to all of the Rebbe’s Shluchim, who have done unbelievable accomplishments. There are many places in the world, where, if not for the arrival of the Rebbe’s Shluchim, there would be no Judaism or Torah observance. May Hashem grant them many happy and healthy years to continue the Rebbe’s great legacy, give merit to countless Jews and bring them closer to Judaism. May the Rebbe’s merit protect all the Shluchim and the entire Jewish people, and may we merit the resurrection of the dead with the coming of Moshiach, amen.”

As he makes his way toward the limousine generously provided by community donors, he hears song and dance. As he listens to the words of the song, he understands that these are the Talmidim Hashluchim leaving the Rebbe’s Daled Amos to spread Yiddishkeit throughout the world. As they finish their song, he speaks to them as well, continuing on the same theme as before: “In many places, without Chabad, there would be nothing.” He concludes with words of blessing, for success in Torah study and syata dishmaya in everything they do.