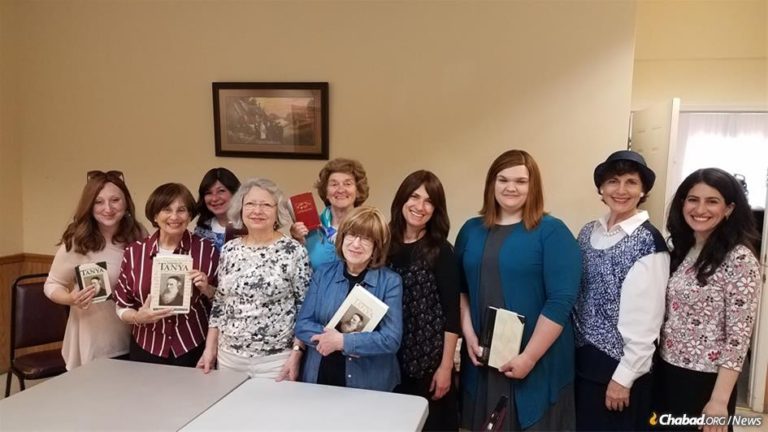 By Karen Schwartz for Chabad.org

A group of women eagerly gathered in a classroom in Chicago on Sunday morning of the Fourth of July weekend to complete a project that began in December 2013: A weekly study of the Tanya, the preeminent work of practical Jewish spirituality and the foundational work of Chabad Chassidic philosophy.

Jodi Sohl, who lives in West Rogers Park neighborhood, brought the idea of a Tanya class to Rabbi Baruch Epstein of Lubavitch-Chabad of Illinois some six years ago. She says that taking part in the class has given her ever-increasing awe and appreciation for Rabbi Shneur Zalman of Liadi, the first Lubavitcher Rebbe, known as the Alter Rebbe, who wrote the Tanya. She was also appreciative of her teacher: “Rabbi Epstein has made the Tanya accessible,” she says, by showing the class how it is applicable to their lives.

“It’s living Torah,” attests Sohl. “It helps me to understand what I’m striving for—and what I think all Jews should be striving for—to be a better person, to be better people.”

Sohl, who was introduced to Rabbi Epstein and his wife, Chaya, by a good friend, says they’re some of the most knowledgeable and inspirational educators she has ever met, and that she looks forward to the class every week. It’s also taught her some valuable lessons about closeness to G‑d, she says. “It’s not just that Hashem is somewhere in the world, but that we are a part of Hashem and Hashem is a part of us,” says Sohl. “And no matter how far we may get from G‑d, no matter what we do, through Tanya I have learned that there’s always a way back.”

Participants go over the Tanya line by line to master its message, says Epstein. The classes are also recorded and posted on Chabad.org.

“The No. 1 thing is to help the students understand how to best achieve the objectives of Tanya, which are to have a personalized relationship with Hashem, to understand the blessing of what it means to learn Chassidus and to translate that into the practical, enrichment in their service of G‑d,” explains the rabbi.

The group studied the final essay on the day after the 25th anniversary of the passing of the Rebbe—Rabbi Menachem M. Schneerson, of righteous memory. Next week, they will begin anew with the very first page of Tanya. “I think that’s significant,” Epstein says, noting that the conclusion and new beginning will take place between Gimmel Tammuz and Yud Beis Tammuz (the 12th of Tammuz), the day when Rabbi Yosef Yitzchak Schneersohn, the Sixth Rebbe, was released from prison in Soviet Russia.

‘Down to a Practical Level’

Esther Rifka Feder, also a resident of West Rogers Park, works most Sundays in a hospital in the Chicago suburbs. But that doesn’t stop the nurse anesthetist from taking part in the learning. She turns on the Tanya class on her hour-plus drive to work, and then if she has questions, asks the rabbi when she sees him on Shabbat.

She’s been listening to the recordings since the start, she says. “Learning Chassidus is so important, and learning Tanya is even that much more important,” she says. “It’s important to learn to get your head engaged instead of just your heart.”

Being part of Epstein’s class has been very meaningful for her, she says. “You read the daily portion, you try to internalize it, you try to understand it, but really learning from a teacher from the beginning who goes through each portion and is able to bring it down to a practical level makes it even better.”