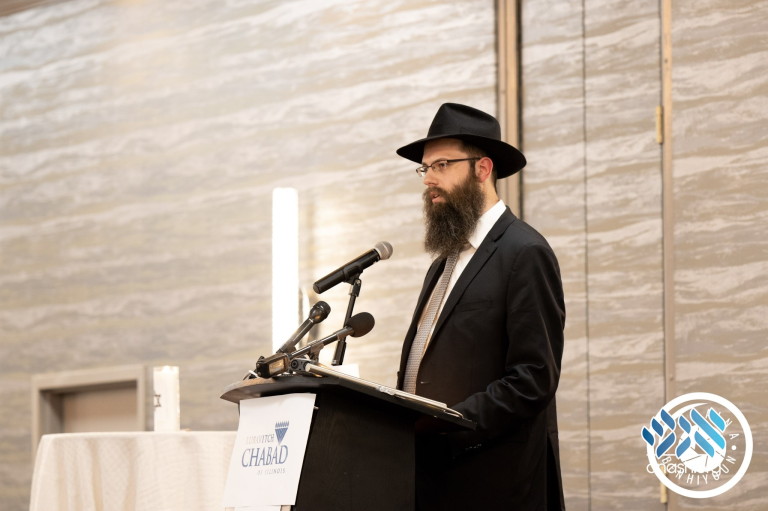 An “Evening of Jewish Unity, Solidarity, and Prayer” united Chicago Jews in response to the Poway tragedy.

Two days after the deadly shooting in a California synagogue claimed the life of one worshipper and wounded three others, Chicago’s Jewish community took a stand against hate on Monday evening, coming together for an “Evening of Jewish Unity, Solidarity, and Prayer” that united Jews from across the region.

“When I saw Rabbi Goldstein” — the rabbi of the congregation who was wounded in the attack — “declaring from his hospital bed ‘ Am Yisrael Chai ,’ the people of Israel lives, I realized we can’t just stand by and do nothing — we had to stand with our brothers and sisters in solidarity,” said Rabbi Avraham Kagan, co-director of Chabad of River North and Fulton Market. Kagan helped plan the event, which was sponsored by Lubavitch Chabad of Illinois in cooperation with the Jewish United Fund and other local organizations.

Despite the last-minute preparations, 1,000 people packed the ballroom of the Holiday Inn North Shore in Skokie for the rally, including local elected officials and rabbis and congregants from across the Chicago area.

Consul General of Israel to the Midwest Aviv Ezra attended with his sixth-grade daughter. “She’s the next generation, and I want her to see and learn how the Jewish community takes a stand against antisemitism,” he said.

Jews spanning a range of communities across the Chicago area joined together, united by tragedy and determined to bring light and goodness into the world. Many quoted the late Lubavitcher Rebbe, who said “A little light dispels much darkness.” This was Chicago’s way of providing that light.

Rabbi Yosef Moscowitz, co-director of Chabad of Bucktown, lit a memorial candle for Lori Gilbert Kaye, the woman murdered in the California attack. Rally participants joined together reciting Psalms, watching a video of the injured Rabbi Yisroel Goldstein from his hospital bed in California, and singing the words that he urged every Jew never to forget: Am Yisrael Chai.

“We stand here tonight in grief, but also in solidarity — in reaffirmation of Jewish unity — and in affirmation of the words of Rabbi Yisroel Goldstein: ‘We are strong. We are united. They cannot break us,” JUF President Dr. Steven B. Nasatir declared to sustained applause and a standing ovation. He pointed out the “last-minute” nature of the event and marveled at the high turnout from all sectors of the community.

Many participants shared the feeling that despite the short notice and stormy weather, they had to do whatever it took to stand together with their Jewish brothers and sisters. “What a beautiful show of unity,” said Rabbi Zvi Engel of Congregation Or Torah in Skokie. “It’s unfortunate it is under such sad circumstances.”

Moscowitz urged the crowd to find a way to counter the darkness of hatred and violence with the light of good deeds and mitzvot. All who attended were offered free Shabbat candles to help bring that light.

“This Shabbat, whatever you are doing, stop and come to shul” he said. To close, he challenged everyone to be kinder, better people and echoed the call of Am Yisrael Chai.