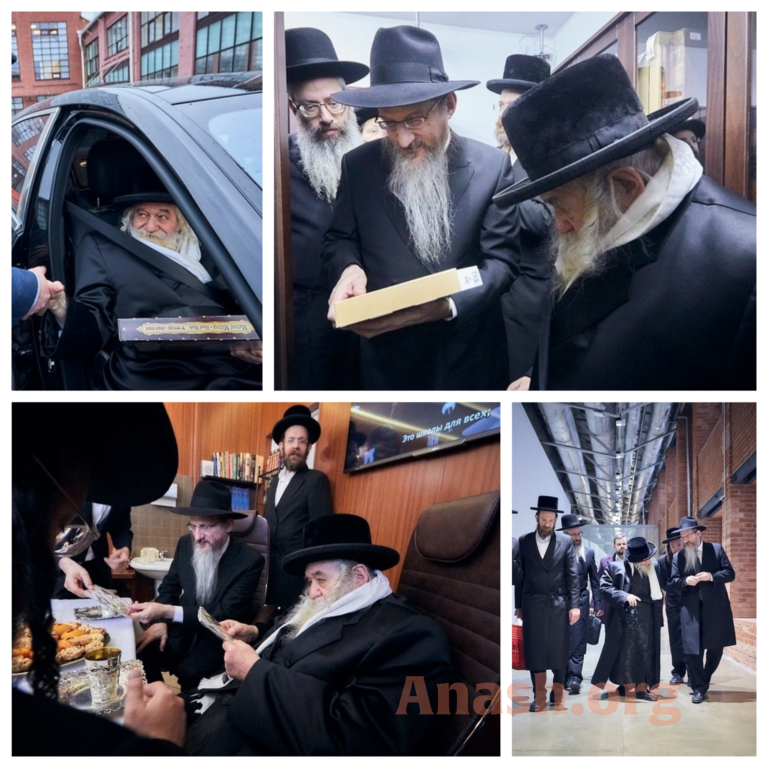 The Chernobler Rebbe, who spent two days in Moscow in order to strengthen Russia’s Jewish community, requested to visit the Shneerson Library which is housed today in the Jewish Tolerance Museum located in the Marina Roscha neighborhood.

About four years ago, Mr. Vladimir Putin, Russia’s president, transferred the holy books that belong to our Rebbeim, from Lenin’s library, where they had been kept since the Frierdiker Rebbe’s escape from Russia. Amongst them are rare manuscripts containing Chassidic discourses and more.

The esteemed guest was greeted at the entrance to the museum by the Chief Rabbi of Russia, Rabbi Berel Lazar, who founded and initiated the Jewish Museum. Today it is one of the world’s largest and most important museums, with thousands of visitors passing through its doors each month, learning about the world G-d created and about historical events of past generations through the untainted lens of pure belief in Hashem.

For a long time the two Rabbis sat together in the closed library studying the holy books, while discussing many matters in Halacha and Aggada, Chassidus and Drush. They also shared stories of their esteemed ancestors and their family ties through the Alter Rebbe and his mechutan the Maggid of Chernobyl, all the way to the Rebbe Rashab whose Yom Hilula was last week on the second of Nissan. Thus they sat immersed in study until their entourage came and told them that the time has come for Mincha prayers. Then they set out together to the Shaarey Tzedek Chesed Center which stands adjacent to the Jewish museum.

The Shaarey Tzedek Chesed Center which is a beacon of light and goodwill to thousands of Jews throughout the entire year, is a bustling beehive of activity on the eve of Jewish holidays.  Many departments, staffed by hundreds of caring workers and volunteers see to the needs of the needy and indigent, ensuring that they be able to celebrate the upcoming holiday with dignity and joy. This is also a project directed and encouraged by the Chief Rabbi or Russia, who founded the center and continues to guide and support it on a regular basis.

Upon entering the spacious center, one finds the “Tefila leMoshe” Shul, which serves as a warm spiritual haven to all those who come. Whether to daven, to learn Torah, put on Tefilin, or attend a Chassidus class – gatherings in this place bring nachas and enjoyment to the One Above.

Now, at the head of the table in this shul sat the esteemed Rabbis, both host and his guest, joining in a Chassidishe farbrengen with niggunim, divrei Torah and Chassidic stories. Rabbi Lazar showed his honorable guest, the Chernobler Rebbe some reports of this year’s Maos Chitin drive which ensures that every needy Jewish family will be able to buy all that they need for the upcoming yom tov of Pesach. This is done through the “Matan BeSeiser” Fund of Moscow which is also a project of the Shaarey Tzedek Chesed Center.

The Chernobler Rebbe gifted them with the book “Tzur Tzaddik” written by his father O.B.M. There in the preface he notes that he had studied at Yeshivas Tomchei Tmimim.

In conclusion, he wished lots of success to the administration of the center, and to its dedicated lay leaders, and blessed them all amongst all of Russia’s Jews with a Kosher and Happy Passover.