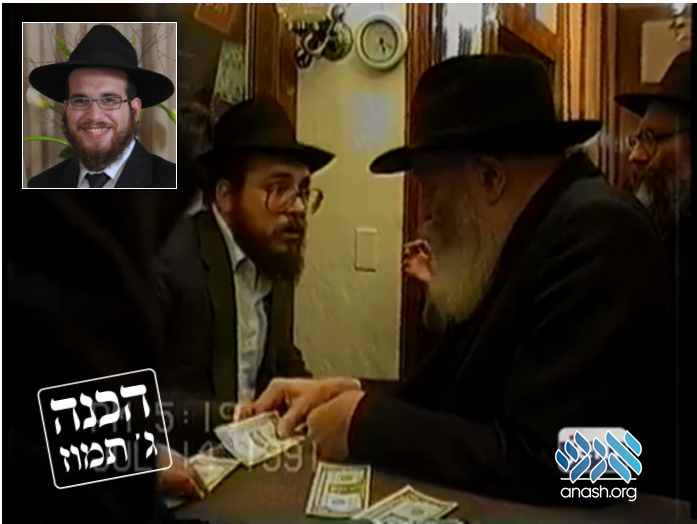 Rabbi Shlomie Deren, rabbi and shliach of Ellenville, NY, describes the surprising impact finding a video of his special moment with the Rebbe had on him, and others close to him.

By Rabbi Shlomie Deren for Anash.org

Many in my generation, a generation old enough to have seen and been seen by the Rebbe, but too young to have anything but the faintest memory of those encounters, cling to any slight memory, story or anecdote that gives us a sense of personal connection to the Rebbe.

I am blessed to have grown up hearing many stories of my family’s personal connection to the Rebbe. It has always been a source of great pride to me that the Rebbe’s famous letter, in which he explained how to receive answers after the histalkus to questions that would have been addressed to the Freidiker Rebbe, was sent to my great-grandfather, Rabbi Sholom Posner.

In an answer that seems written for our times, the Rebbe wrote, “With regard to your question, that it is no longer possible to turn to the Rebbe when you have doubts in how to act – if you stand strong in your hiskashrus to him, and mention your question at the tzion of the Rebbe, the Rebbe will find a way to answer you.”

Even more meaningful to me was the story my father often told about the Rebbe’s instructions for my upshernish. My birthday is in middle of the 9 days. My parents had planned to make my upshernish as soon afterwards as halachically possible, as per the Rebbe’s general guidance.

One Sunday, a short time before my third birthday, my father brought me to the Rebbe to receive a dollar. “Ches Av vert er drei yor alt,” (on 8 Av he will turn 3 years old) my father told the Rebbe. After giving me a dollar to give to Tzedaka, the Rebbe turned to my father and said “Mistame vet men machen di upshernish noch, af chamisha asar b’av, uder far deruf.” (Presumably you’ll make the Upsheren after, on the 15th of Av, or earlier.)

I was a young boy at the time, and in spite of my efforts as I grew older, I don’t have any memory of this encounter. Yet, to me it always meant something; I knew that I was by the Rebbe, and that the Rebbe had given special instructions about me..

Last week, I heard about a service offered by JEM. For a small fee, one of their staff members, Rabbi Zalmy Ceitlin, will search the archives for videos or pictures of an individual by the Rebbe. All he needs to start is a name and date.

After speaking to my father to narrow down the date, I reached out to him. Shortly afterwards, I got a message: “Here you go”  with a screenshot attached. It was a photo of my parents, standing in front of the Rebbe, with me standing next to them, too short to be seen.

Looking at that picture, and later watching the video of the Rebbe speaking directly to me, had an impact that can’t be put into words.  This impact is stronger than any learning, talking or farbrenging about hiskashrus could be. Here I was, watching the Rebbe speak directly to me. Finally, something that my physical eyes and ears could relate to. The Rebbe found a way to answer me and remind me that I am connected.

I wasn’t the only one touched by this video. In the first screenshot,  my younger sister, less than 6 weeks old, is seen in my mother’s arms. I immediately forwarded it to her, knowing that it would be meaningful to her. Little did I know how meaningful it would be.

Less than 24 hours earlier she had written a heartfelt letter to the Rebbe, after an event that she put on as part of her shlichus had a significantly smaller turnout than expected. The Rebbe found a way to answer her and thank her for her dedication to his shlichus.

The next day, the impact moved beyond my own family. In addition to that first video, I was sent 6 other videos of my family by the Rebbe. In one of them, my father  is seen introducing Mr. Yankele and Mrs. Dee-Dee Pelled, a couple from Pittsburgh who were growing closer to Yiddishkeit.

My sister showed the video to her friend, this couple’s daughter. She knew it would be meaningful to her and her family, especially since Dee-Dee had recently passed away. To her surprise, the video had an even greater impact than she expected.

A short time after sharing the video, her friend responded, “Thanks so much for sending this to me-I sent it to my family and they were shocked, especially my father. What’s even crazier is the date of the video, chof beis kislev, is the date my mom passed away! So crazy!” The Rebbe found a way to answer them and comfort them in their grief.

While we wait for the answer to this heartbreaking question, we will follow the Rebbe’s instructions on how to ensure that we merit to hear his answer. We will “stand strong in our hiskashrus to him.” We will learn the Rebbe’s torah and follow his instructions.

We will dedicate ourselves to completing the Shlichus the Rebbe gave us, to bringing every single Jew closer to Hashem and his mitzvos. And then, as the Rebbe promised my great-grandfather 69 years ago, he “will find a way to answer” and we will once again see the Rebbe physically with the coming of Moshiach now!

Special thanks to the entire team at JEM, led by Rabbi Elkanah Shmotkin, as well as all of those who generously support their endeavors. The fact that the Rebbe speaks to so many of us through them is a tribute to their dedication and commitment as well as the value of their work.