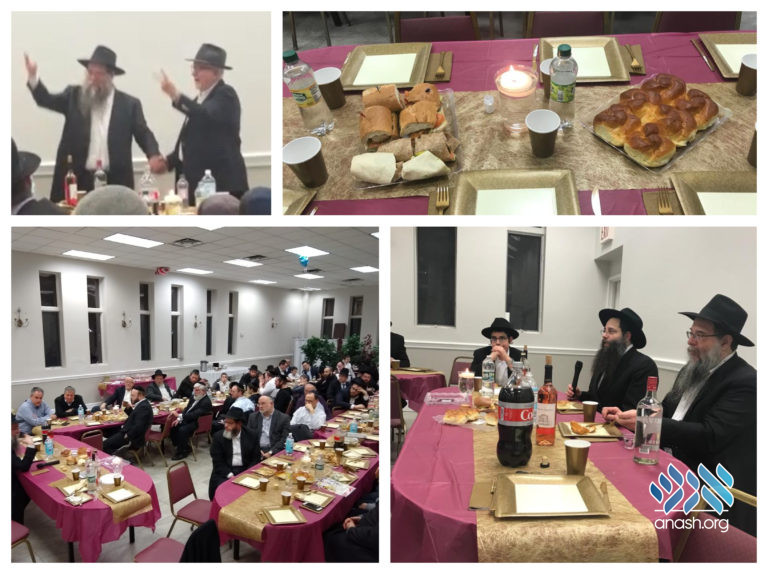 This year’s guest speaker at Chabad of Far Rockaway’s annual Yud Tes Kislev farbrengen was Rabbi Avrohom Sternberg, Shliach in New London, CT. Rabbi Sternberg engaged the crowd of close to 100 participants for over four hours, inspiring and uplifting them with empowering insights and stories.

The Farbrengen centered on the Alter Rebbe’s נ”ע response to Reb Boruch Meszibuzer’s זצ”ל question. R’ Boruch asked the Alter Rebbe why he had to endure the hardships of imprisonment instead of simply ‘taking care of it’ miraculously. The Alter Rebbe answered that he acted like Yaakov Avinu, who could have chosen the supernatural path to fight Eisav, but instead sent him gifts to appease him.

With deep insight, Rabbi Sternberg explained this point as being the cornerstone of Chassidus and what makes Yud Tes Kislev relevant to us in the 21st century. If the Alter Rebbe would have taken the supernatural approach, then this entire saga would have been a nice story about a miracle performed by a holy Jew over two centuries ago. We would not be able to apply a message from that to our daily lives. By choosing to go through this difficult experience naturally, the Alter Rebbe gave us the tools to make the story relevant in dealing with our own personal struggles and adversities through the lens of Chassidus.

In addition to the various uplifting chassidishe niggunim sung throughout the evening, the participants also enjoyed Chazan Tzvi Tsatskis singing some of his famous songs which he used to sing on numerous occasions in the presence of the Rebbe זי”ע.

At the end of the Farbrengen many participants personally thanked Rabbi Pesach Schmerling (Shliach in Far Rockaway) for the beautiful event and shared that this farbrengen on the ‘Rosh Hashanah of Chassidus’ will surely have a lasting effect on them and their families, in Limud Hachassidus and Darkei Hachassidus for the entire year to come.

To join in Chabad of Far Rockaway’s amazing work or to sponsor a future event please contact Rabbi Schmerling at FrChabad@gmail.com or to make a donation go to ChabadFarRockaway.org/donate.