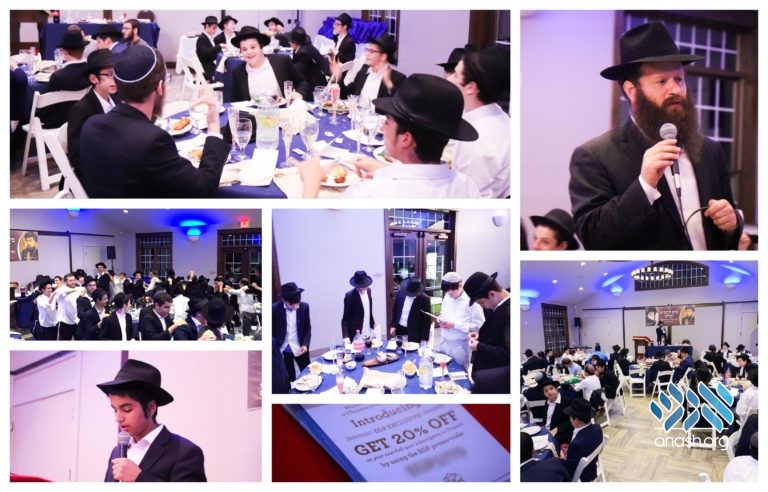 While most camps and yeshivos have already held their local Siyum Horambam during the nine days, the staff at Chayolei Hamelech’s EGP felt that an event celebrating the Rebbe’s takana needs to be done in a most festive and joyous manner. One which the restrictions of the nine days would not allow.

Following the Rebbe’s directive in a similar situation (see Lech-Lecha 5751, Haara 10), it was decided that a small Siyum be held in its proper time during the nine days, and as soon as the nine days are over, a joyous celebration would take place with a festive fleishig meal along with music and dancing.

Monday evening, the Bochurim got onto the buses headed to Chabad of Abington, where the siyum was held. Hours before the campers arrived, the staff prepared the Chabad House’s social hall for a Chasuna-like event.

The program was emceed by Learning Director Mendel Hendel and began with an opening address by Head Counselor Levik Ginsberg. Both the Siyum and the Hascholo were made by Bochurim who excelled in Limud Horambam. The Siyum by Boruch Elkayam, and the restarting of the Rambam was done by Shalom Traurig. Right after the Siyum, the crowd burst into spontaneous dancing of “Umal’ah Ha’aretz De’ah Es Hashem” and Reb Levik’s niggun.

‎A highlight of the event was undoubtedly the keynote address by Shliach and director of Scranton’s Jewish Discovery Center, Rabbi Benny Rapaport.

Right before Birchas Hamazon the Bochurim were all treated to a dessert, along with an exclusive surprise: a special coupon for 20 percent off on their next subscription to Chayenu.‎

The Bochurim came out of the event with a renewed energy and commitment to fulfill the Rebbe’s takana – never to miss a day of learning the daily portion of Rambam.