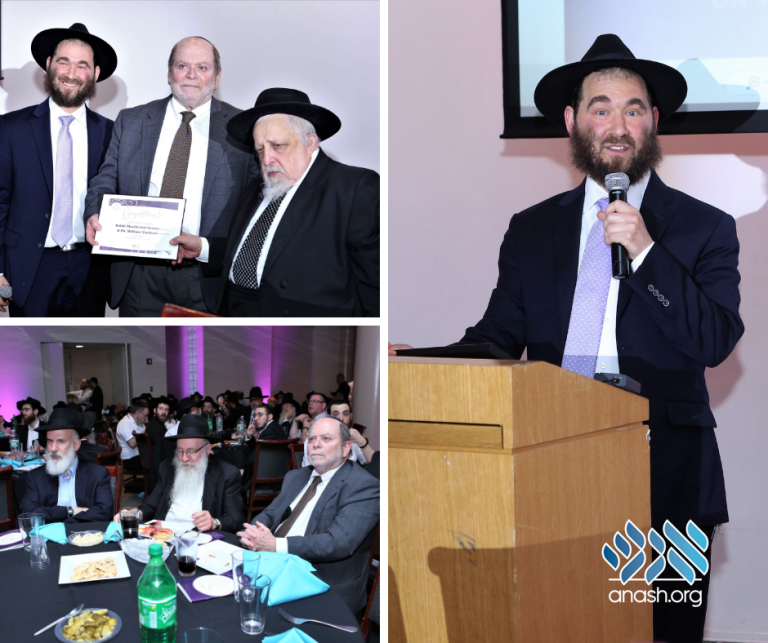 Hundreds of JNet volunteers gathered this Monday at the Jewish Children’s Museum for their 6th annual volunteer appreciation event.

The annual event honors the volunteers who dedicate time weekly to learn with Jews all over the world. As they checked in, each volunteer was presented with the book Daily Wisdom 2 as a gift.

The event began with a buffet dinner catered by Mendy’s, During the dinner, a scrolling video listed the thousands of volunteers and their place of residence. Light, pleasant music by composer Sarah Dukes played in the background.

Rabbi Yehuda Dukes, director of JNet, introduced the evening’s theme of Ki Heim Chayenu. He beautifully expressed how the volunteers connect their chavrusas with life itself.

In a special video message, JNet’s chairman Rabbi Moshe Kotlarsky spoke about volunteering for this special organization as an act of hiskashrus. He introduced a special campaign aimed at having volunteers encourage their chavrusas to get someone else to do a mitzva in honor of 25 years since Gimmel Tammuz.

To showcase JNet’s effect and expansion, a video of chavrusa Rael Codron in the Australian outback was shown. This year, Rael had a Purim seuda, two pesach seders and got a pair of tefillin for a fellow Jew. He credits the Jewish revival in his town to his learning on JNet.

Guest speaker Rabbi Eli Goodman of Chabad of the Beaches spoke about the significance of humility when it comes to learning Torah. In his speech, he credited the JNet volunteers with possessing this humility through their connection to the Rebbe.

To show the impact JNet has had on his community, Rabbi Goodman introduced Mason Fein, a congregant of Chabad of the Beaches who spoke about Tanya’s effect on his life. “I may not be perfect now, but when I have a negative thought or grudge come to my head about someone, I immediately try to push it out. My relationships with everyone in my life have changed dramatically.”

He then called up his chavrusa Moshe Parelman to the podium and, for the first time in person, thanked him for enriching his life. Until that moment, they had spoken only on the phone during their study sessions throughout the past year.

Rabbi Dukes then proceeded to present them and several other attendees with accomplishment certificates. Included in this presentation were Horav Mordechai Gurary , rav of Chevra Shas Shul, and his chavrusa of more than 8 years, Mr. William Shulman. Mr Shulman came from Cliffside Park, NJ to attend the event.

Rabbi Gurary addressed the crowd, stressing the importance of learning; following his inspiring words, he and made a siyum on Masechta Sotah.

A highlight of the evening occurred when Rabbi Dukes introduced chavrusa of the year Rabbi Yoel Chazan. A video testimonial from his now close friend Dr. Alexander Birbrair, who heads a stem cell research lab in Belo Horizonte, Brazil, was shown.

“I always thought I was religious,” Dr. Birbrair said. “When I came to Chabad for the first time, I brought all my religious articles including my tefillin. However, it was Friday night; I know now that they are muktza.”
He expressed his heartfelt thanks to Rabbi Chazan and all of the JNet volunteers for the meaningful change they make in people’s lives.

The event concluded with Rabbi Chai Kohan, director of JNet’s Spanish division, drawing the winner for the raffle of the Shavuos learning campaign.

Volunteers felt uplifted and encouraged to devote themselves even more to their shlichus in Mivtza Torah.

“It was very inspiring. You could really feel the impact that people are having on their chavrusas,” said Mrs. Shoshana Lifshitz, whose husband attended as a guest and was inspired to volunteer as well.

“Rabbi Manes Weingarten and his chavrusa Yosef Waslow, who have been studying together for more than 6 years, met for the first time tonight,” said Rabbi Dukes. “When I see the power these chavrusas have, I no longer feel guilty for trying to convince people to volunteer,” he concluded with a smile.

Siyum Honorees of the evening:

JNet is a project of Merkos Suite 302.