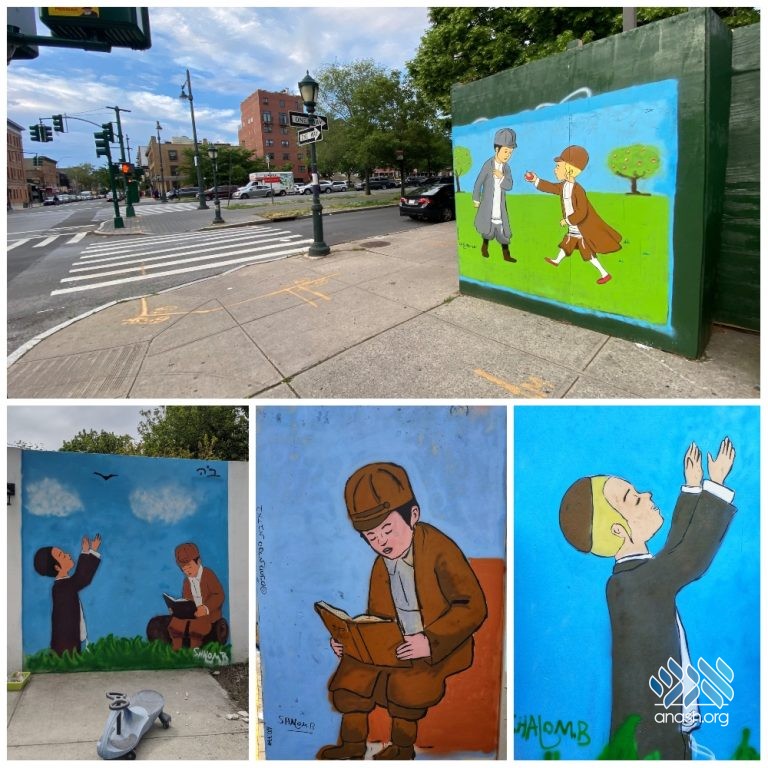 Artist Shalom Burkis is bringing familiar and poignant scenes from the Shtetl to Crown Heights – and right into your own backyard.

As you turn onto Albany Avenue from Eastern Parkway, you’ll notice a familiar image. Across the the wall stretches a beautiful replica of a drawing in the Machanayim series’ “The White Fountain,” depicting the Alter Rebbe and his brother the Maharil, as young boys.

“I grew up surrounded by the volumes of Stories of Tzaddikim,” says the painting’s creator Shalom Burkis, “I would love to go down to my grandfather’s warehouse, sit on a cardboard box and be drawn into Chassidic life, as it used to be.”

In the mid- 1970’s Burkis’ grandfather is Gershon Burkis of Lod, Israel, noticed the lack of quality children’s books, received a bracha from the Rebbe and went on to successfully publish and distribute the famous Machanayim series around the world

As a teenager growing up in Israel, Burkis (junior) began his recent career with a beautiful painting of the Rebbe emblazoned on the wall of a Lod warehouse. This prompted the city’s Chabad school to hire him to produce similar artwork at its entrance and positively impact children entering the gates.

One success led to another. Kfar Chabad next invited Burkis to add to the atmosphere in the village with his street paintings. There, he created several masterpieces, including a mural at the town’s train station.

Burkis’ reputation followed him in his travels to the USA, where several members of Crown Heights Anash recently hired the artist to paint Chassidishe scenes in their backyards for their own children.

So, what prompted the Albany Avenue painting?

“Well,” Burkis told Anash.org, “I thought to myself ‘hey – there should also be a Chassidishe atmosphere on the street too!'”

Do you have a favorite scene in Machanayim volume? Shalom Burkis will paint it for you at a reasonable rate.