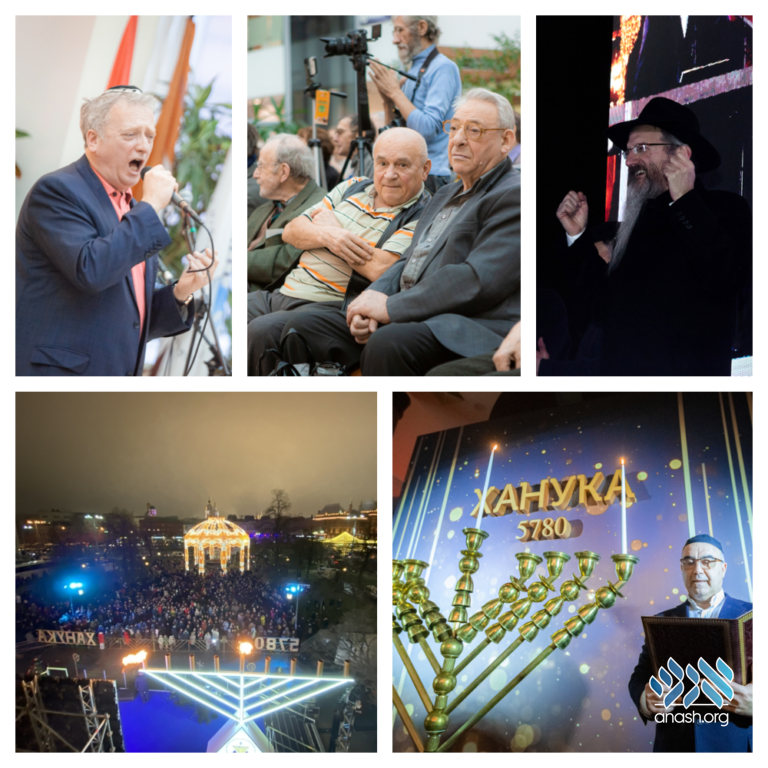 Dozens of Menorah lightings, parties and events were held over Chanukah in Moscow, reaching young and old, poor and wealthy, those imprisoned and those in hospitals.

Chanukah in Moscow, the capital of Russia, this year reached hundreds of thousands of Jews from all walks of life in the city, old and young, poor and wealthy, orphans and those in need, prisoners and hospitalized, in a chain of activities that encompassed all the places where Jews could be found.

The opening shot was – as every year – at the foot of the Kremlin walls in central Moscow, when Russia’s chief rabbi, Rabbi Berel Lazar, kindled the first candle. The hundreds gathered danced to chassidishe niggunim celebrating the victory of light over darkness, expressed so clearly at the place which had once be a symbol of Jewish persecution. Dozens of media outlets broadcast the hadlakah live to millions of people, giving millions more a chance to see the expression of Jewish pride.

In the central synagogue “Marina Rosha” in central Moscow, hadlokos took place every night, with dignitaries invited each night to light the Menorah. The hadlokos, arranged by the dedicated gabai’im were attended by large audiences of both young and old.

The dozens of shluchim in Moscow, and the yeshiva students, went home to home every evening with menorahs, donuts, and most importantly – with a warm and enthusiastic spirit to uplit all the Jews of Moscow.

Chanukah parties were held, and Chanukah candles were lit for Jewish prisoners and prisoners in all the prisons in the city.

In the hospitals, hot food was distributed to the hospital with menorahs, so that they too could enjoy the joy of the holiday. The activities were organized by the volunteers of ‘Bikur Cholim – Moscow’. The Sharei Tzedek Chessed Center held daily events in honor of Chanukah, attended by hundreds of elders and needy, who also received respectable food baskets for the holiday.

In addition, in all Chabad houses scattered throughout the city, educational institutions, orphanages and every Jewish center in Moscow, mass events were held, spread throughout all eight days of Chanukah.