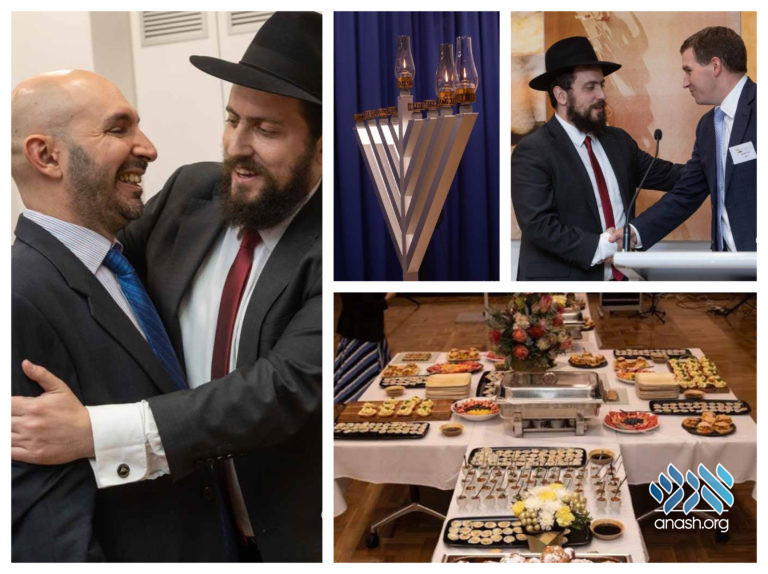 The eight-day Jewish festival of Chanukah commenced in Canberra with festive community events – the highlights being the 6th annual ceremony in Canberra Parliament’s Reception Room as well as a community fair including the lighting of the National Menorah at Chabad ACT’s HQ. This year’s theme was “Bringing World Peace”.

The events took place with the backdrop of unprecedented hazardous smoke affecting Canberra due to the tragic ongoing bushfires. Over 120 community Chanukah events are being held this week throughout Australia, organized by the Chabad Rabbis and organizations. Many of the Chabad communities have utilized the public gatherings under harsh conditions to rally people together to help with bushfire relief and support for the firefighters.

A crowd of about 100 VIPs gathered together to enjoy Canberra’s annual major Chanukah event at the ACT Parliament organised by Chabad ACT.

Attendees who enjoyed the function included ACT Politicians from both sides of politics and Ambassadors and Diplomats from Argentina, Belgium, Germany, Greece, Hungary, Italy, Ireland, Poland, Romania and the U.A.E. Also joining representatives of the Jewish community at the celebration were leaders from most of Canberra’s large faith groups.

Rabbi Shmueli Feldman, Chairman of Chabad ACT, who MC’d the popular function being held for the sixth consecutive year, acknowledged all the VIPs and commenced the proceedings by inviting Rabbi Eli Feldman of Newtown Synagogue to deliver an invocation dedicated to all of those affected by the ongoing horrific bushfires, followed by the singing of the Australian National Anthem.

Rabbi Shmueli then gave the annual Chanukah address and encouraged everyone to rise to their calling by being the heroes the world need to make the next miracle and to bring about world peace.

Minister Chris Steel MLA, also representing the Chief Minister, thanked Chabad ACT for all they do for the community in Canberra and spoke of his visit to Israel, connecting it with the important role the Chabad ACT Jewish community plays in Canberra, gleaning from the messages of Chanukah.

Mr Alistair Coe MLA, Leader of the Opposition, spoke of the contribution of the Jewish community throughout history and until today in Canberra. He praised the tireless work of Rabbi Shmueli and Rebbetzin Chasia Feldman in the Jewish and wider Canberra community and lauded the initiative of Canberra’s first Jewish school being opened by Chabad ACT in February 2020.

Mrs Nicole Lawder MLA, Deputy Leader of the Opposition, read the letter sent for the event by the Prime Minister of Australia the Hon Scott Morrison MP.

Rabbi Feldman then invited ACT Political Leaders to jointly kindle the Lamplighter: “It is with this spirit I invite Minister Stephen-Smith and Leader of the Opposition Coe of our Nation’s Capital, together with all the other ACT MLAs present, to come together and kindle the lamplighter of our National Menorah. This will represent a spirit of true bipartisanship, leading by example as lamplighters in Chief – In dispelling the remaining darkness in our society by lighting up Canberra with even more goodness and love.

Following the lighting of the lamplighter, Rebbetzin Chasia Feldman, Co-Director of Chabad ACT, inspired the crowd with a talk on the power of the lights on the candles of the Menorah and how we each need to tap into it.

Blessings on the Menorah were then sung by Rabbi Yossi Feldman of the Shtiebel.

Symbolic of steps being taken towards the countries of the world coming together for the purpose of world peace, all of the Ambassadors together assisted in the lighting of the first candle. The various Faith leaders assisted with the lighting of the second candle, representing the recognition that we are all children of one G-d with a common purpose, just like the branches of the Temple’s Menorah, which were all part of one piece of gold.

In a heartwarming feature following the lighting of the lamplighter, all assembled joined together in the singing of Maoz Tzur and the song for world peace – Oseh Shalom, led by Rabbi Feldman.

Chanukah menorah kits with candles, individual gift boxes containing chocolate Chanukah gelt coins, dreidels and guides for the festival were gifted to the guests as a memento upon exiting. A truly enjoyable and uplifting experience was had by all.

The previous evening, on the first night of Chanukah, about 100 members of the community came together, despite the hazardous smoke, at Chabad ACT HQ for a community fair and feast where everyone enjoyed all the various activities and community spirit in experiencing programs and themes in relation to Chanukah. The event was held mostly indoors due to the hazardous bushfire smoke outdoors and the formalities began with special prayers for all of those affected including those who had tragically lost their lives.

The highlight was the lighting of the giant National Menorah for the first time in many years since its restoration. Amongst the Dignitaries who addressed the crowd for the lighting were Ambassador of Israel to Australia H.E Mark Sofer and Leader of the ACT Opposition Alistair Coe MLA.