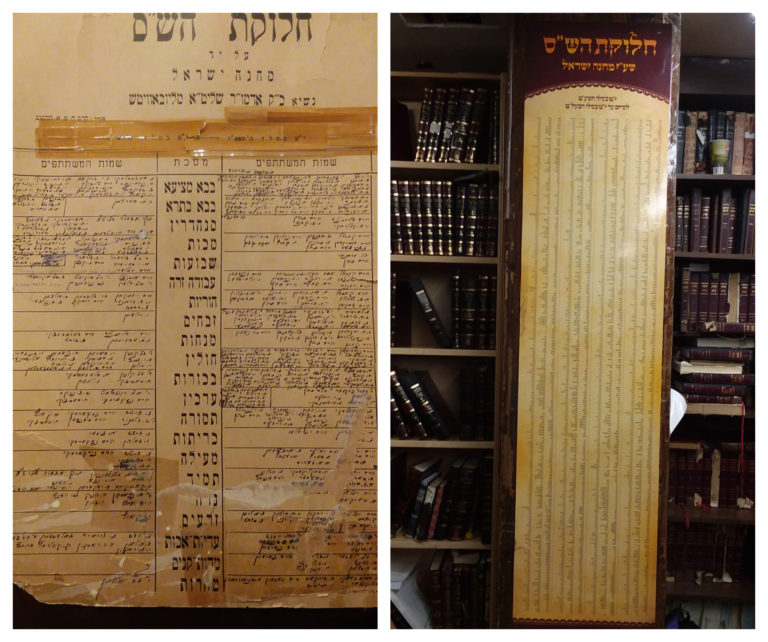 The division of Shas in 770 evolved from a handwritten sign by mazkir Rabbi Sholom Mendel Simpson a”h to an oversized poster on a 770 wall.

Chalukas Hashas is a Chabad custom to divide the entire Shas among all chassidim and beyond, that was started by the Alter Rebbe and continued throughout the generations.

By the Rebbe, this division took place (as stated in the Hayom Yom) during the Rebbe’s Yud Tes Kislev Farbrengen in 770. Special cards would be distributed and the Rebbe would participate by choosing a masechta.

The Rebbe would – usually – pick masechta Sanhedrin and sometimes others as well. The one who had the privilege to hand the Rebbe a pen to write down on the card which Masechta he was choosing, was Harav Ephraim Yolles, chief Rabbi of Philadelphia, who enjoyed a close connection to the Rebbe.

Once the cards were filled out, they would all be given to the Rebbe, either at farbrengen or later. The Rebbe would give them to his personal secretary Rabbi Sholom Mendel Simpson a”h to organize.  Since the beginning of the 5710’s, Rabbi Simpson would meticulously organize the information and create an organized list of all participants. The full-list was hung up in the hallway of 770 upstairs. In the earlier years when there were fewer participants, the lists were hand-written, while later on it was typed.

The following year, before Rosh Chodesh Kislev, Rabbi Simpson would mail a reminder to all those who took upon themselves a masechta the previous year, reminding them which masechta they chose and urging them to finish learning it before Yud Tes Kislev.

As Lubavitch grew BH, the number of people who would participate in the farbrengens and the Chalukah grew as well. Additionally, many communities – like London under the directorship of Rabbi Nachman Sudak a”h – would send their communal lists of Chalukas Hashas to the Rebbe to be added to the central Chalukah in 770. The work got harder and the list got longer. Eventually, the list was moved to the downstairs Beis-Midrash of 770.

The Chalukas Hashas was, as all the special projects that the Rebbe entrusted Rabbi Simpson with, was very dear to Rabbi Simpson.

In 5751, Rabbi Simpson asked Rabbi Simon Jacobson of Vaad L’Hafatzas Sichos to prepare a Kuntres of Sichos that the Rebbe had spoken about Chalukas Hashas. Once completed, Rabbi Simpson brought it to the Rebbe and asked if the Rebbe would review it and allow it to be printed. The Rebbe did, and this special Kuntres, called “Kuntres Chalukas Hashas,” was printed. It was dedicated in memory of Rabbi Eliyahu (Yaichel) Simpson, the father of Rabbi Sholom Mendel Simpson, whose Yahrtzeit is the fifth night of Chanuka.

An interesting piece of historical information:

The whole idea of Chalukas Hashas by a community, is that it is considered that the entire community has the zechus in the whole Shas. However, in the earlier years, there were some years that certain masechtos were not taken. In those instances, Rabbi Sholom M. Simpson would approach Rabbi Yehoshua Korf who would always accept to learn those remaining masechtos. This way it would ensure that the entire Shas was divided.

The Rebbe was very involved all the years in Chalukas Hashas.  And Chalukas Hashas and the achdus it brought – being learned together – was very dear to the Rebbe, as can be seen from the accompanying notes.

To participate in this year’s Central Chaluka Hashas in 770, visit ChalukashashasMachne.com and add your name and masechte chosen. You will then be added to the Chalukah and your name will be brought to the Ohel.

You can also email the information to: Chalukashashas770@gmail.com