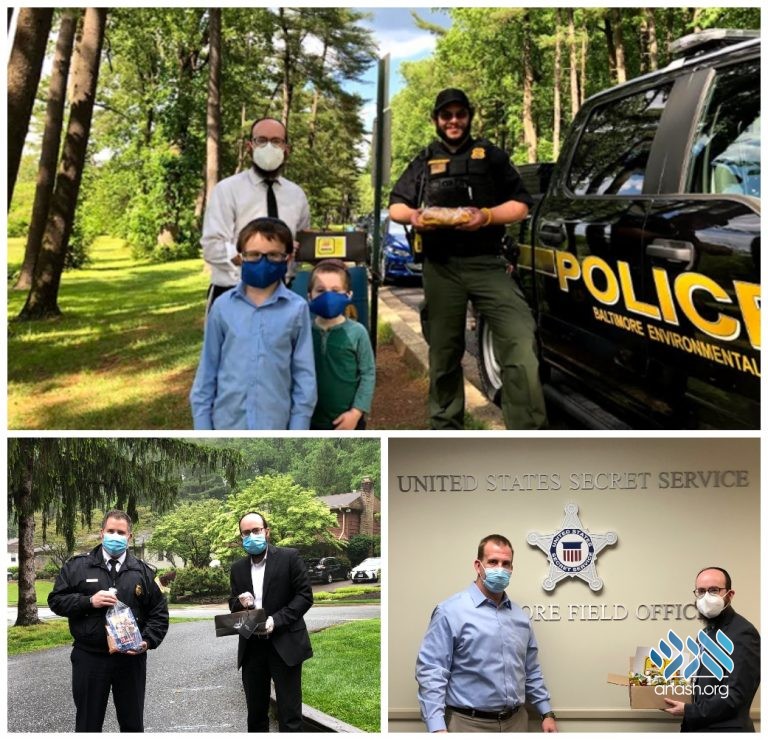 Rabbi Chesky and Chani Tenenbaum, whose shlichus caters to Jewish men and women in uniform, have been delivering bags loaded with home-baked challas, treats and notes of appreciation.

While Maryland remains in the process of reopening, Jewishtimes.com reported, COVID-19 still constitutes a very real threat, particularly with reports of coronavirus increases in other areas of the country.

Thinking of what they could do to show their appreciation to the first responders who place themselves in harm’s way for the public good, Rabbi Chesky Tenenbaum and his wife Chani, co-directors of the Jewish Uniformed Services Association of Maryland, an outreach organization to Jewish men and women in uniform, put together a pair of new programs: Gift Bags for Heroes and Challah for Heroes.

“With everything going on, we knew we had to be there even more so for our brave men and women in uniform,” said Rabbi Tenenbaum, “as they still have to go to work and be out there making sure that the citizens are safe.”

The Challah for Heroes program involves baking challah loaves that are then delivered directly to the households of first responders. The loaves are baked by Chani Tenenbaum herself, who, as of the writing of this article, estimated that she had baked some 100 to 200 loaves for the program. The loaves are delivered to listed members of JUSA, and to first responders who are nominated to receive them, said Rabbi Tenenbaum, who makes many of the deliveries himself, while others are made by a few volunteers.

Prior to the coronavirus outbreak, the Tenenbaums often invited uniformed personnel to their house to share a meal on Shabbat, said Chani Tenenbaum. As that is no longer a viable option, “we instead like to send them a bit of Shabbat that they can bring to their home,” she said.

“Challah,” Chani Tenenbaum continued, “symbolizes traditional family time, Shabbat, a warmth, and when it’s homemade, it’s full of care and you feel a sense of connection.”

The Gift Bags for Heroes program, as the name suggests, involves sending gift bags with helpful items to the workplaces of first responders, including police and fire stations, Rabbi Tenenbaum said. Typically, the bags include hand sanitizer, a snack or candy, and a message of appreciation. Rabbi Tenenbaum has made many of these deliveries himself alongside his children, he said, and reported that the hand sanitizer is often particularly appreciated, as even now it can be difficult for first responders to acquire on their own.

One such delivery was made June 16 to the Maryland Emergency Management Agency, according to the agency’s Executive Director Russell Strickland. Describing his agency as the Maryland equivalent of FEMA, Strickland explained how those under him work to facilitate communication between different state departments and organize the flow of personal protective equipment to hospitals.

According to Strickland, the JUSA’s donation of gift bags was much appreciated. “It was very meaningful, just the fact that the rabbi and this organization was reaching out to us and thinking of us meant a lot,” Strickland said. “We’re very focused on the attitude of letting people know that we care. And we really do care about them before, during, and after a disaster. And the rabbi behaves the same way and respects us and comes forward with gifts to show that there are those who appreciate us and what it is we do.”

When asked what impact she was hoping these donations would have on first responders, Chani Tenenbaum said that she hopes “that it will be both a way of showing them our support, and also a way of giving them a sense of faith during these trying times.”