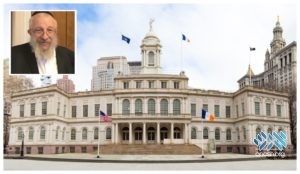 In December 2017, the New York City Council, led by Speaker Corey Johnson, passed a law stating that any therapist who engaged in what they called “Conversion Therapy” would be fined up to $10,000 per session.

The law forbade therapists from assisting patients who sought help dealing with certain inclinations they did not wish to have. While various therapies will not work for everyone, with this law, those who wish to pursue it were deprived of the opportunity.

In Sukkos of 2018, Dr. Dovid Schwartz, a professional counselor living in Crown Heights, decided to sue the city of New York.

“I was sitting in my Sukkah waiting for people to arrive, and I googled the Alliance Defending Freedom (ADF),” Dr. Schwartz told Anash.org. “I had heard about their work defending the first amendment [in related areas]. I approached them soon after, and we filed our first motion in January.”

Dr. Schwartz decided to pursue the case for the sake of two freedoms which the law violated: freedom of speech and freedom of religion. As he prepared to enter a legal battle with New York, he knew he would bring the Rebbe’s position on this matter into his case.

“If someone comes to me and says, ‘I’m experiencing these feelings and I don’t want to go against the tenets of my religion’, and I have to say I can’t help them or I’m breaking the law, then I’m being censored religiously,” Dr. Schwarz said. “My opinion is not simply Dovid Schwartz’s position; there is a world-renowned Jewish leader who spoke about this in a very sensitive yet clear way.”

Although religious freedom was a significant consideration, Dr. Schwartz explained that the main issue the team fought for was freedom of speech. If a patient asks to have a conversation about something they are experiencing, and a therapist has to tell them that it would be illegal, their speech is being censored.

The confidential nature of any therapeutic relationship protects patients- but not the practitioner, Dr. Schwartz explained. “If someone came to me with this situation and I said I’ll try to help, he could turn me in. He can break confidentiality – a patient can publish anything in the New York Times! – while I can’t even deny or affirm that I saw him, or I’d be breaking confidentiality.”

When the city first passed the law, key players actually encouraged people to go to some “religious fundamentalist therapist” and trap them. Dr. Schwartz thinks someone might have tried to do this to him this summer.

When Dr. Schwartz began working with the ADF, they told him they were glad that he was the plaintiff. As a therapist in a chassidic community, it was unlikely that he would face the intense professional and personal backlash that a practitioner from another background might. Indeed, he was spared the aggressive protests and character assassination that are often directed against those who take a stand in this arena.

“We were willing to go up to the supreme court; we brought in a very powerful law firm,” Dr. Schwartz said. “But national activists read the case, which was over 70 pages long and included a statement from Rabbi Tzvi Hersh Weinreb of the OU explaining the Rebbe’s position. The leadership of the movement [that the law represented] convinced Corey Johnson that it would be worse for them to lose this case then for him to give up on it. And they thought they were going to lose.”

Veteran members of the Council were shocked to hear that the law would be repealed- this had never happened before. Amazingly, a law that was passed by a 43-2 majority was repealed in September with a 45-0 vote!

“There are more and more therapists who, because of social pressure, are saying there’s nothing that can be done which isn’t true,” Dr. Schwartz said. “It’s giving up on lives! I have met patients who were told by frum therapists that they’re not going to be able to change this, they should just learn how to live with it.”

Dr. Schwartz believes there is help for those who want it. Thanks to his courage and the efforts of his legal team and the ADF, he is once again able to guide his patients on a path of their choosing.