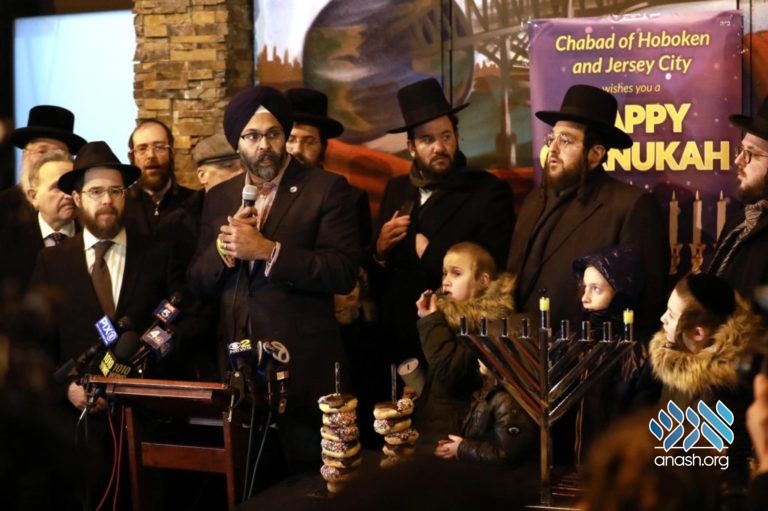 The scene of the Jersey City shootout became a symbol of hope and perseverance on Sunday night, the first night of Chanukah, with a Menorah lighting honoring a wounded police officer.

JERSEY CITY, NJ (VINnews) – The scene of the Jersey City shootout became a symbol of hope and perseverance on Sunday night, the first night of Chanukah. A small silver menorah and containers of doughnuts sat on a folding desk in entrance of the market.

Behind the table, a small banner was hung, wishing a Happy Chanuka from Chabad of Hoboken and Jersey City. Shliach Rabbi Moshe Schapiro who had helped arranged the event told reporters that the event symbolized light overcoming darkness. “Good will always win in the long run,” he said.

A bit of after 6:30 p.m., Singer Yoely Greenfeld stood on the desk, only a few feet away from the place his sister, Leah Mindel Ferencz, was killed. With a purple lighter, Mr. Greenfeld touched a flame to kindle the candle laced in the menorah.

“I know that Mindy would be uplifted to see the outpouring of support we have received, both from the Jersey City residents and from all over the world, from every race and religion,” Greenfield told WCBS Tv reports.

Jersey City police officers who were injured in the firefight were also honored. Raymond Sanchez appeared to have tears in his eyes as he was presented an award by Yeshiva school children whose lives were saved that day by those heroic officers.

The Jersey City menorah was displayed outside the boarded-up market Ferencz, 32, and her husband, Moshe Ferencz, owned. The market is on a street named for Dr. Martin Luther King Jr., who famously said, “Darkness cannot drive out darkness. Only light can do that.”