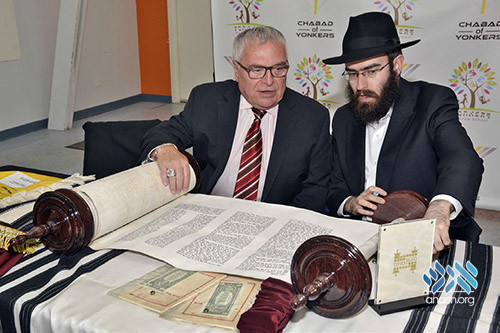 Via The Jewish Link

Brothers Izzy and David Schwartz and their families dedicated a new Torah to be written in loving memory of their parents, Frida and William Schwartz, and donated the Torah to the Chabad of Yonkers/Greystone Jewish Center. Chabad of Yonkers Rabbi Mendy Hurwitz said, “This was an event not to be missed, the first dedication of a new Torah to our community in the past 60 years.”

Rabbi Hurwitz first met Frida and William Schwartz when, as a 13-year-old yeshiva bocher, he and others were sent by the Lubavitcher Rebbe,to assist Jews to perform additional mitzvot. They went on Fridays door to door to various businesses, seeking Jews to encourage them to put on tefillin. One Friday in 1996, he entered the Abco Steel Door Company on Third Avenue in the Bronx, and was greeted by a large picture of the Lubavitcher Rebbe. He knew he had found the right place! With young Hurwitz’ help and encouragement, Abco Steel Door company founder William Schwartz started to regularly put on tefillin and recite brachot.

“No matter how busy it was at the factory, your father never skipped putting on tefillin,” said Rabbi Hurwitz, addressing their children and grandchildren present at the Torah dedication. “Things can be tense in manufacturing, but your mother, Frida, was always able to calm things, with a smile, with a comment. From that time, your father never stopped putting on tefillin.” William and Frida’s sons Izzy and Barry later joined their parents working at the company.

“When we were teaching bar mitzvah classes, your father, William, asked about the cost of a Torah,” continued Rabbi Hurwitz. “I explained that we needed an additional Torah,” and despite the expense, “your father said ‘one day when I am able, you will get an additional Torah.’ And the entire Schwartz family joined in and today made that day happen. Your parents Frida and William (Zev in Hebrew) are definitely looking down today from heaven, from Gan Eden, joining us in dedicating this Torah in their honor. Frida and William, both Holocaust survivors from Romania, are helping us grow Judaism here in Yonkers.”

Rabbi Hurwitz noted that “Izzy’s Hebrew name Yisroel contained the last letter in the Torah, lamed, which combined with the Torah’s first letter, bet, reversed, spell lev, heart, meaning that when one follows the Torah’s teachings with their heart, Hashem gives you back all the blessings.” Israel (Izzy) Schwartz then started writing the last word in the Torah, which is his name, Yisroel, guided by the hand of sofer Rabbi Yitzhok Raskin of Machon Stam.

Other family members completed writing the remaining letters of the new Torah, along with Kohanim, Levim and members of the congregation and community. After checking that the ink had dried, Izzy Schwartz raised the Torah and displayed the klaf and letters in a long and beautiful hagbah. Grandson Barry Schwartz performed gelilah, closing the Torah and putting on the new cover memorializing their parents and family. Ted Goetz, a Chabad of Yonkers member, placed a beautiful new keter, crown, on the Torah that he and his wife, Donna, commissioned in memory of his father, Gustav Goetz, and her father, David Martin.

Under a deep-blue chuppah held high by yeshiva students, and escorted by Yeshiva Mesivta Menachem students, Izzy Schwartz cradled the new Torah and led the procession of Torahs in a joyous circle around the synagogue, accompanied by live music and singing, similar to the joy and ceremony of Simchat Torah, aided by his brother, David, who brought the new Torah into the Greystone Jewish Center.