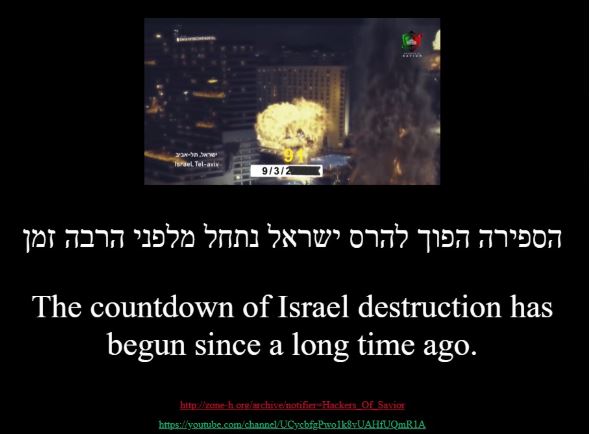 Multiple Israeli websites were the target of a cyberattack on Thursday, their homepages being replaced with an anti-Israel video and message in Hebrew and broken English: “The countdown of Israel destruction has begun since a long time ago.”

The bottom of the page credited a group called “Hackers_Of_Savior” for the attack. The page title was changed to “Be Ready for a Big Surprise” in Hebrew. Visitors to the sites were asked to allow access to their cameras, allowing the hackers to gain personal information.

The attack occurred as Israel celebrated Yom Yerushalayim on the 53rd anniversary of the capital’s reunification, and as anti-Israel activists mark the day with anti-Israel events around the world.

The Petah Tikva Municipality announced on Thursday that the Directorate for Urban Renewal of Kramim had been affected by the cyberattack, as the site is built on private infrastructure, unlike the rest of the municipality’s sites.

Israel’s National Cyber Directorate (INCD) said that the attack was likely perpetrated by Iran or Hamas, both of which have previously carried out such Quds Day attacks.