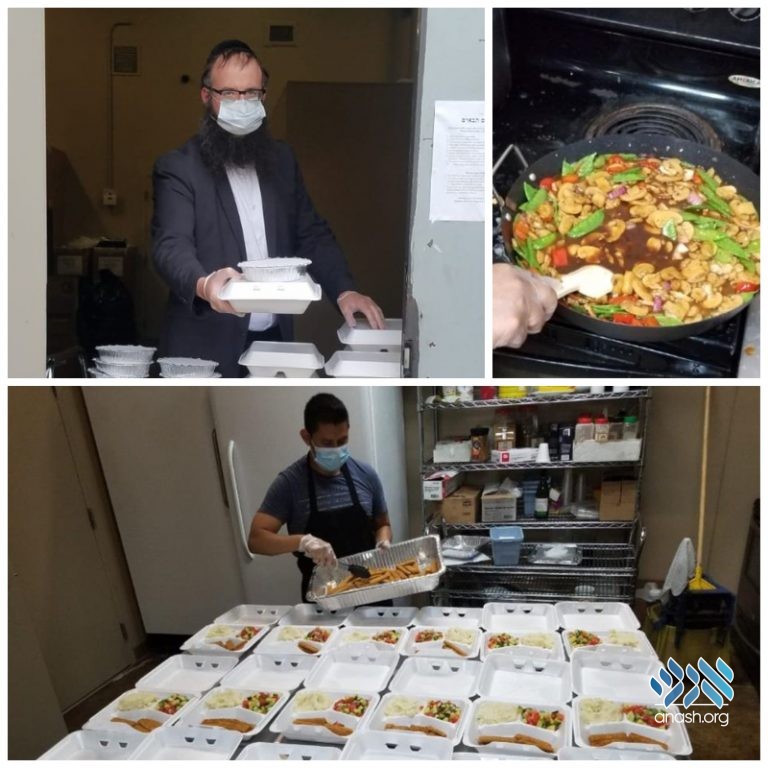 Due to the coronavirus pandemic, a record number of hot, fresh meals are being delivered to the doorsteps of Chicago’s needy courtesy of Bubby Fira’s Food Bank, run by F.R.E.E. of Chicago.

When Chicago went into lockdown as a result of the coronavirus pandemic, Mark, a resident of the middle-class neighborhood of West Rogers Park, said goodbye to cooked food. Living alone below poverty level, the middle-aged Chicago native had always looked forward to Shabbat—the one day a week he knew he could enjoy a home-cooked meal at one of the neighborhood families whose largesse he had come to rely on.

With social-distancing restrictions in place, Mark planned to eat cereal, canned vegetables and other simple nonperishables for Shabbat as well. He said he was “touched to tears” when he received a call from Rabbi Levi Notik, telling him that hot, fresh meals would be delivered to his doorstep courtesy of Bubby Fira’s Food Bank.

“Since March, requests for food have increased tremendously,” reports Notik, director of development of FREE (Friends of Refugees of Eastern Europe), who also directs the food bank. “Last year at this time, we were serving around 200 fresh meals a month; now we are serving close to 1,200.”

Since Bubby Fira’s opened its doors in 2015, it has provided cooked meals and pantry goods to the needy in the community, mostly in West Rogers Park, but also for people in Uptown and other urban neighborhoods.

Since food depositories are not increasing their allowances due to overwhelming requests, Notik’s staff has been buying ingredients at wholesale costs to prepare the additional meals. Additional staff has been hired to prepare and coordinate the food preparation and distribution, and a designated hotline has been established to field the many requests.

The project is named in honor of Fira Gershengorin, the late grandmother (“bubby”) of local builder and philanthropist Morris Gershengorin, who was born to Jewish immigrants from the former Soviet Union. “Some of my most memorable experiences with Bubby revolve around food that she worked really hard to make,” says Gershengorin. “Bubby Fira was a very proud strong Jew and big advocate of tzedakah who always made sure that people were fed.”

According to Notik, Bubby Fira’s beneficiaries represent a broad swath of educational backgrounds and socio-economic strata, including many families who regularly have cooked Shabbat food delivered discreetly to their homes. They also deliver fresh challahs to several hundred eldery immigrants from Russia on a weekly basis.

While Mark has been unable to work in years, others suddenly lost their source of livelihood as a result of the pandemic.

Until this spring, Sarah earned her meager living babysitting for several families, each of whom paid her modest wages in cash. With the advent of social distancing, she lost all of her clients and has been unable to apply for unemployment benefits. Since she is considered high-risk, she has been housebound for three months, during which she has been receiving regular food and pantry deliveries from the kosher food bank.

Operating through Passover when panicked shoppers had emptied supermarket shelves presented its fair share of challenges for Bubby Fira’s, but the meal production managed to continue unabated.

“The need has been great and growing,” says Notik, “but so has the ongoing generosity and kindness of our community, which has stepped up to the plate to assist us in making sure that everyone who asks is cared for with dignity, love and nourishment.”