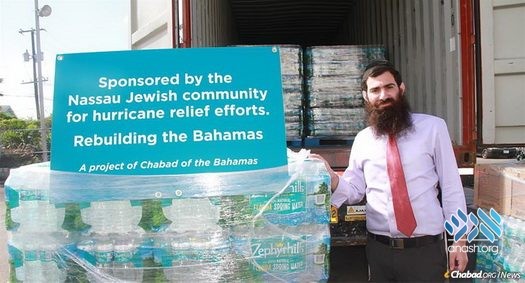 by Mordechai Lightstone for Chabad.org

After devastating the northern Bahamas with a fury unprecedented in this Caribbean nation’s history, Hurricane Dorian is bearing down on the eastern coast of the United States with winds in excess of 110 miles per hour. The hurricane, one of the strongest on record in the Atlantic, has killed five people, leveling homes and flooding neighborhoods on the more remote Abaco Islands in the northern Bahamas.

Rabbi Sholom and Sheera Bluming, who co-direct Chabad of the Bahamas in Nassau, the capital, hunkered down for the storm after checking in on community members and began planning for its aftermath as soon as the extent of the destruction became evident.

By Rabbi Bluming’s estimate, there are 1,000 Jewish expats who call the Bahamas their home, with upwards of 100,000 Jews visiting the islands each year. While the Blumings were in touch with the Jewish community in Nassau, some of those living on Abaco were impossible to reach and still remain unaccounted for.

“Nassau was relatively unscathed by Dorian,” Bluming tells Chabad.org, “so our current focus is providing relief to people stranded in Abaco—getting in touch with residents there, and making sure that supplies and aid get to everyone who needs it.”

Bluming has joined in the official government relief effort, rallying the Jewish community to help, and is coordinating a shipment of supplies from South Florida, which Bluming hopes will bring necessities like food, drinking water and mosquito nets to Abaco.

“Part of our duties as good people is being there to help every person in need,” says Paul Wynn, who together with his brother, Jeff, runs Goldwynn Hotel and Residences, and is partnering with Chabad in the relief effort. “That’s why we feel it’s crucial to partner on this initiative.”

But with the airport in Abaco still under 4 feet of water, it remains difficult to get to the islands, let alone properly assess the growing crisis there.

“It’s been incredible to note the tremendous outpouring of support from Jews around the world,” says Bluming. “My inbox has been filled with hundreds of emails asking to help in the relief effort.”

To help with the relief effort, visit Chabad of the Bahamas’ hurricane relief page here.