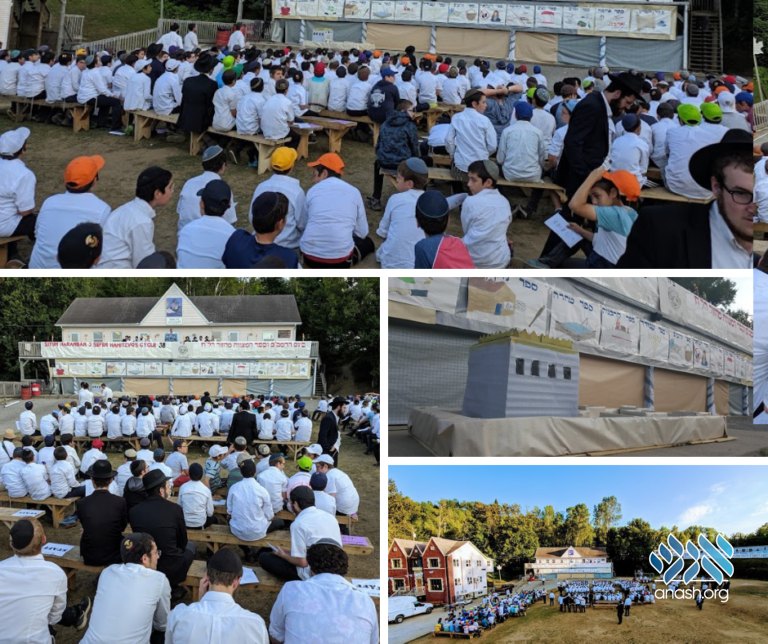 Camp Gan Israel Montreal came together Monday afternoon to celebrate the completion of Limmud HoRambam. The entire camp including “Section C” gathered outside and participated in what was a camp-wide effort:

The Masmidim worked through the night and made a beautiful banner displaying the 14 books of Mishneh Torah, the CGI Kapelye choir performed while the campers joined along, and the counselors and head staff made introductory remarks and distributed prizes.

The siyum was made by Rosh Yeshiva and Masmidim mashpia, Rabbi Akiva Wagner and the new cycle of Rambam study was initiated by camp mashpia Rabbi Shmuel Avtzon.

Campers were encouraged to join the global campaign started by the Rebbe in 5744. Some of the older campers resolved to learn 1 or 3 chapters a day and many younger campers decided to start learning the daily Sefer HaMitzvos. The show of unity and song was certainly a catalyst for good in this regard.

The evening concluded with a light show of sorts. Fourteen balloons were outfitted with electric lanterns and released to fly above the seated campers. These lanterns, the campers were explained, represented the light that studying Torah brings into the world.

We hope that these last few weeks of camp will present many more opportunities to encourage our boys to add in Limmud HaTorah and the kiyum of the Rebbe’s horaos.