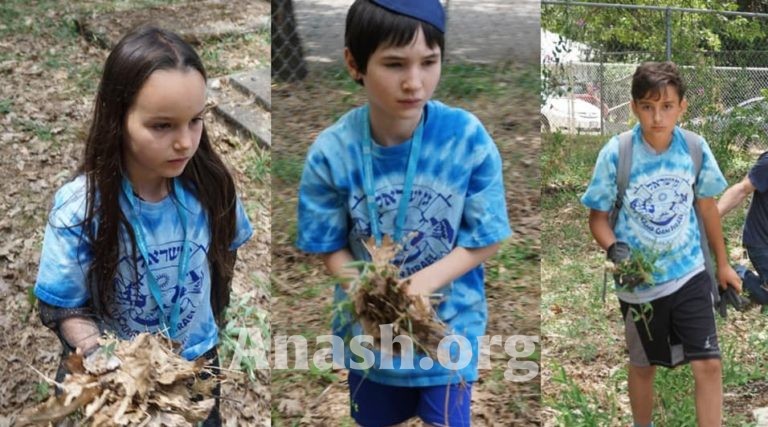 CGI campers in Grass Valley did their part to preserve Jewish history in Nevada County.

On Friday, June 28, over 20 campers ages 4-12 from Camp Gan Izzy of the Foothills visited the Historical Jewish Cemetery in Grass Valley for the first time. It was the final day of a one week Jewish summer camp led by Chabad of Grass Valley.

“We wanted to leave the campers with a message they would remember forever,” said shlucha Mrs. Chyena Yusewitz, who directs the camp. On the bus ride, she prepared the children for their visit to the Jewish Cemetery and set a tone of seriousness and respect for the sacred ground.

Campers learned about the history of the Jewish people in the times of the Gold Rush. These gravestones are tangible evidence of the dedication Yidden had to their faith even in those remote, rugged towns.

The January 1848 discovery of gold nuggets in the South Fork of California’s American River started a rush to the Foothills of the Sierra Nevada that lasted more than two decades. Jews populated the mining areas as well. Life in the mining camps and tent cities was difficult and unpredictable. Death from accident, fire, diseases and primitive medical care was part of the fabric of daily existence.

For the Jewish pioneer, the inevitability of death united him with his fellow Jews. Halacha is unequivocal that the dead must be buried in the earth. Responsibility for proper kevurah lies on the community when there are no relatives present.

By the mid 1850s, the establishment of local Jewish cemeteries became necessary. It was too costly and impractical for communities to bury their dead 50 to 100 miles away.

165 years later, two dozen children and their counselors entered the cemetary, reciting the Shema Yisrael from the depths of their souls. With gloves and trash bags in hand, the campers began cleaning up, collecting hundreds of gallons of leaves and weeds. When they were finished, they left the cemetery quietly singing the Jewish songs they learned in camp, but this time, with a much deeper appreciation of what it means to be born as a Jew, live as a Jew, and die as a Jew.

The tombstones and burial plots on these grounds are historical documents that tell us much more than the name and the date of death; here is a testimony to the life of the Jewish Gold Rush pioneer.