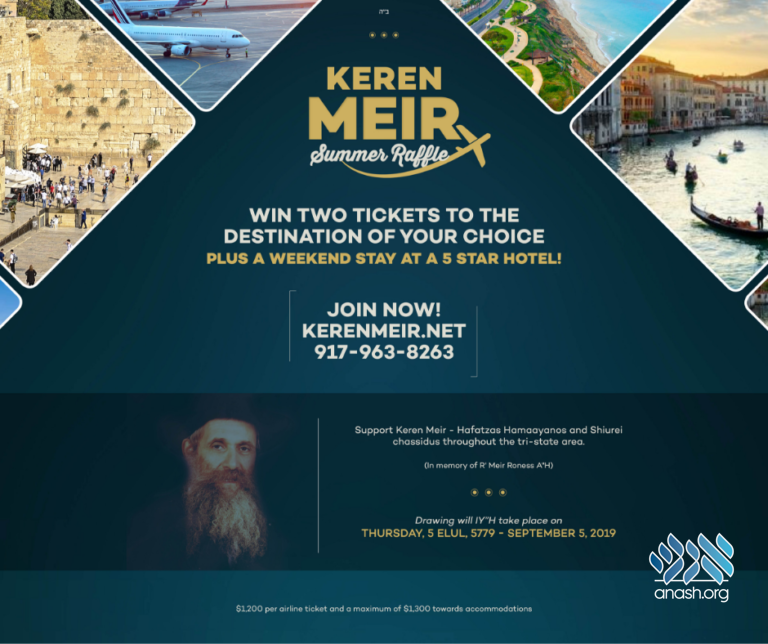 To help fund their efforts to spread chassidus throughout the east coast and beyond, Keren Meir is holding its annual fundraising raffle for 2 tickets to anywhere worldwide and a weekend stay at a 5 star hotel.

As Chassidim, we not only have the obligation and merit to learn chassidus, but we carry the duty to reach out and share this treasure to all of those around us.

What began as a humble initiative to arrange shiurim in the yeshivas of campers that he had spent summers with at Camp Gan Yisroel in the Catskills, quickly grew to become an incredible network of students, magidei shiurim and hundreds of shiurim in yeshivas across the East Coast and beyond.

Rabbi Roness A”H did not let anything stand in his way. No location was too inconvenient, no amount of effort was too great. With razor sharp focus he ensured that wherever there was an interest, a shiur was established. Drivers, and even flights were arranged to supply magidei shiurim on a regular basis to those yearning to quench the thirst of their neshamos. To fund this enormous undertaking, Rabbi Roness turned to the Anash community and was a constant presence by every simcha encouraging the crowd to take part in this incredible initiative and share this special zchus.

Keren Meir was established shortly after the sudden passing of Rabbi Roness A”H, four and a half years ago, to continue the holy work that he devoted his entire life to for more than 53 years. Keren Meir oversees the many shiurim that were established during his lifetime and under its direction many new shiurim have been founded.

However, Keren Meir can not be satisfied and must expand further to reach as many Yidden as possible.

Keren Meir is now holding its 3rd annual Summer Raffle. The money raised will go directly to fund the costs associated with the organization of the shiurim and Hafotzas HaMayonos.

The winner of the Keren Meir Summer Raffle will receive 2 round trip tickets to the destination of their choice – worldwide, as well as a weekend stay at a five star hotel in that destination!

But, most importantly, participating in this raffle will grant you the incredible zchus of having a share in the hundreds of hours of Chassidus being learned and igniting the flame of so many Neshamos.

Tickets are just $36, and until August 30, thanks to an early bird special, your donation of $65 dollars will double your chances!

Tickets can be purchased today at: www.kerenmeir.net