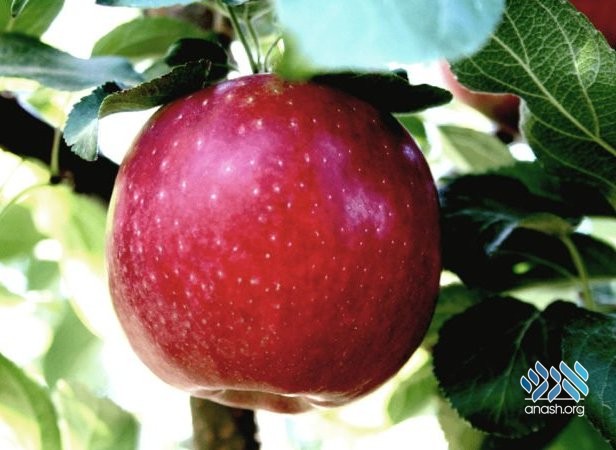 By Moshe Rosenberg for Chabad.org

It’s not often that a fruit gets so much attention.

I can’t remember exactly when and how I heard about it (was it on NPR or Quartz?), but around two years ago I found out about a new apple being developed that was poised to be one of the biggest fruit launches in recent memory. Called the Cosmic Crisp, it was being touted as the best apple ever, and consumers were going to love it.

Of course, my kids had already heard about it (social media, obviously), and we were stoked. We kept updating each other on the timeline, and the “end of 2019” launch date could not come soon enough to get our hands on them.

Finally, last month, news outlets reported on the first shipments of 450,000 boxes that were being delivered to stores nationwide. Alas, none of our New Jersey chain stores carried it. I was ecstatic when my wife saw on Facebook that my brother-in-law, Shloime, who owns Mr. Greens, a gourmet fruit store in Brooklyn, got his hands on an early shipment! Naturally, I picked up a few on the way home from work (right down the block from the Chabad.org Brooklyn offices) and waited to share the experience with my kids when I got home.

On the subway ride home, it suddenly struck me: Orlah!

Orlah? What’s that, you might be asking. Well, living outside of Israel, we almost never have the opportunity to confront this little-known Jewish law. So here are the basics:

Within the first three years that a tree produces fruit, that fruit may not be eaten. (In ancient times, the fruit of the fourth year would be brought to Jerusalem and eaten there. From the fifth year onwards, the fruit could be eaten anywhere.)

What is not so well known is that this law applies even nowadays and outside of Israel. The obvious question is how then can we simply walk into a grocery store and purchase fruit? There is no kosher symbol verifying that the fruit is beyond the third year. The explanation: the halachah (as passed down from the time of Moses) is that outside of Israel, if there is a doubt that the fruit might be orlah, we are lenient, and one may eat it. So that takes care of all commercial fruit. Or so I always assumed.

What about the Cosmic Crisp? I recalled reading that millions of these trees were planted in the spring of 2017—which would now place the recently shipped fruit in their third year!

Seems we’d have to put our feast on hold. Was this “new fruit” kosher?

With the help of Rabbi Google, I dug deep into the reporting and fact sheets of this product launch, learning about the various planting and grafting techniques used, what rootstock is (old trees on which buds are grafted), and the history of this wonderful new fruit.

Breeding began in 1997 at Washington State University to combine the characteristics of preexisting apples, namely that of Honeycrisp and Enterprise: to have Honeycrisp’s texture and juiciness, along with the qualities of late-ripening and long storage of Enterprise. Cosmic Crisp is characterized mainly by dark red skin, dense and firm flesh, with an improved shelf life. The look of the apple’s light dots (known as lenticels) against its wine-red skin reminded focus groups of a galaxy against a night sky, which led to it being named the Cosmic Crisp.

The New York Times described the apple as “dramatically dark, richly flavored and explosively crisp and juicy,” making it “the most promising and important apple of the future.” FoodRepublic.com called it “firmer than the Honeycrisp, but not too firm. And it is high in both sugar and acidity, making it far superior to the Red Delicious, Gala and Fuji varieties as well.”

But as reported extensively in The California Sunday and other sources, the trees are all very new. Six-hundred thousand trees left nurseries in 2017 and were planted in orchards throughout Washington State.

Needing an expert opinion, I turned to those more knowledgeable than I. The conclusion was that it was kosher, for several reasons:

Some trees must be older than three years, which means that every individual fruit may very well not be from a non orlah tree, which is sufficient to permit it outside of Israel. In fact quality, commercial-grade fruit are always beyond the orlah stage.

Also, grafting a stem onto a rootstock of the same species is permitted and doesn’t usually affect the orlah count since we generally follow the age of the rootstock (unless the rootstock was extremely short).

Essentially, notwithstanding a coordinated large-scale planting in 2017 and product launch in late 2019, enough time had elapsed with the trees’ preparation and mixing of stock to render all fruit as doubtful orlah, which is permissible. (In the case of your backyard tree, however, you must still be mindful of orlah!)

A few hours later, my brother-in-law Shloime, from Mr. Greens, called me: “I was not satisfied enough to sell this product until I confirmed it for myself. So I reached out to my vendor who put me in touch with [one of the largest growers of Cosmic Crisp – name withheld]. I said, ‘Ma’am, this is going to be the most interesting question of your week. Maybe of the month.’” I proceeded to describe the Biblical laws of orlah and how it might relate to their new product. ‘I’ll pass a message to a VP,’ she said.

“Not an hour later, I received a call from Mike, the VP. He was super helpful and explained in detail how in order to ensure the quality of the fruit, they may not sell the fruit of a tree within the first four production years. In addition, they have been planting Cosmic Crisp trees in their massive chain of orchards since 2009.”

So what takeaways did I glean from this experience?

So did the apple live up to the hype? Absolutely! Its sweetness, crunchiness, and overall complex flavor is unparalleled. We enjoyed them down to the core, and shared them with friends too! So go out to your local supermarket (or Mr. Greens, if you’re in Brooklyn) and get yourself some 100% kosher Cosmic Crisp apples, and enjoy what G‑d, science, and modern agriculture has provided to us at the dawn of 2020, the “future.” As my 10-year old daughter, Freida, remarked, “This makes me like apples again!”

The author thanks Rabbi Mordechai Millunchick for reviewing this article.