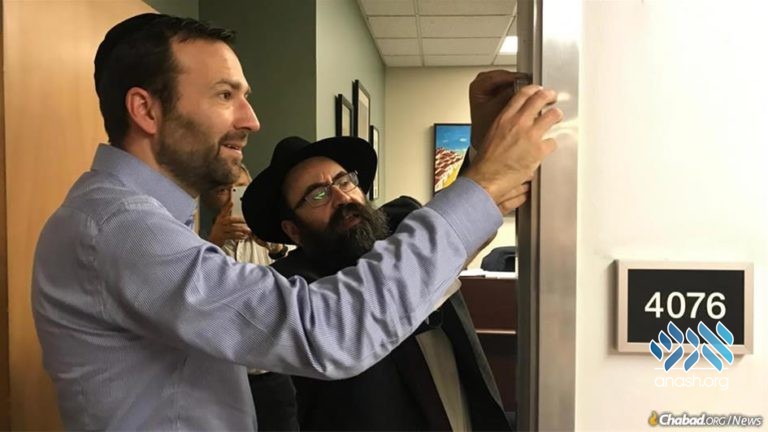 The state of California has taken what lawmakers and religious-rights activists around the nation are calling an enormous step forward in ensuring that Jewish residents are able to practice their faith freely with the governor signing into law a bill that protects their right to place a mezuzah on their doorposts.

As the rise in openly anti-Semitic attacks continues in the state and across the nation, sponsors say that the bill will embolden Jewish Californians to live more proudly as Jews.

While the Equal Housing Act prevents overt discrimination regarding real estate sales and rentals, property owners and managers have invoked homeowner association laws or property covenants that create difficulties for Jewish tenants or condo owners wishing to display a symbol of their faith. A commonly used contrivance is prohibiting the placement of a mezuzah on the front door, citing aesthetic concerns or similar reasons.

When Meir Lang moved into a new apartment in Mountain View, Calif., with his wife a few years ago, they affixed an ornate glass mezuzah case on their doorpost. Soon afterwards, the building management informed them that they had to take it down or be found in violation of their lease agreement. “Had the bill been in place,” Lang told Chabad.org, “I’m guessing it would have saved us the trouble we had to go through with the leasing office.”

Known as the “Mezuzah Bill” Senate Bill 652 establishes that property owners “shall not enforce or adopt a restrictive covenant or any other restriction that prohibits one or more religious items from being displayed or affixed on any entry door or entry door frame of a dwelling.”

As the bill made its way through hearings and floor votes, Lang’s story was one of many used to illustrate the need for such legislation. And while Lang believes that the leasing company asked him to remove the mezuzah not due to anti-Semitism, but simply out of ignorance, he thinks the bill will be valuable as an educational opportunity for leasing companies and others. “At the time, I didn’t know how to deal with the situation, and it felt like it didn’t make sense at all,” he said. “This bill can help bring clarity to other people in the future.”

Mitzvahs as a Response to Anti-Semitism

A mezuzah is a parchment scroll, upon which verses from the Torah are handwritten by an expert scribe, a precept mandated twice in the Torah and observed by Jews for millennia. Its placement on the doorpost designates the home as Jewish and symbolizes G‑d’s watchful care over the household’s inhabitants. In recent history, its message of protection and Jewish identity in the face of adversity was re-emphasized by the Rebbe when he launched a campaign in 1974 to encourage the mitzvah’s observance.

Following the horrific Ma’alot massacre in 1974, when 26 people were murdered in northern Israel by terrorists from nearby Lebanon, the Rebbe redoubled efforts to promote the placement of kosher mezuzahs on the doors of Jewish homes. After “Operation Entebbe” in 1976, the Rebbe wrote that the events are “an indication that Jews must, at the earliest possible, strengthen all aspects of their security and defenses—first and foremost in their spiritual life,” by protecting the home with a mezuzah.

In the aftermath of some of the most horrific acts of anti-Semitic violence targeting Jews and synagogues across the United States, activists have called for more public observance, not less—echoing the Rebbe’s call.

Rabbi Tuvia and Chaya Teldon, directors of Chabad of Long Island, N.Y., recently launched a campaign offering free mezuzahs to residents. When a mezuzah was stolen in an act of vandalism at UCLA, students held a public rededication. In Vernon Hills, IL, a middle school grad proudly wore a kippah. When a synagogue’s window was smashed in Brooklyn, 150 community members gathered to publicly rededicate it. And in Montana, Rabbi Chaim and Chavie Bruk, who co-direct Chabad Lubavitch of Montana, have been offering mezuzahs to residents free of charge for years, often delivering them in person around the state.

The bill was authored by Sen. Ben Allen, chair of the Legislative Jewish Caucus, and every member of the caucus, which is comprised of seven state senators and nine assembly members, signed on as co-authors. It has received widespread support from local communities and organizations, including the Anti-Defamation League, a co-sponsor of the bill.

“Posting a mezuzah is not a decorative choice for Jews. Rather, an observant Jewish person would be unable to live in a home where placement of a mezuzah on an entry door frame is not allowed,” said Nancy Appel, ADL’s California Legislative Director, who was active in the ADL’s support of the bill. “Enforcement of otherwise neutral and generally applicable rules that prohibit altering the appearance of an exterior doorway has posed a unique hardship for some Jews in California who have been ordered to remove their mezuzahs or face a daily fine. Although ADL has successfully advocated for affected Jews to enable them to post their mezuzahs on a case-by-case basis, this bill guarantees that they won’t have to face this impossible dilemma in the first place.”

The bill enjoyed bipartisan approval, passing four committee hearings as well as floor votes in the Senate and the Assembly without a single vote cast in dissent. Having passed both houses of the legislature, it was sent to the desk of Gov. Gavin Newsom, whose signing introduced the bill into law.

“I hope it just means that no one will ask tenants to take down their mezuzahs,” said Lang. “And that if they do, people have a way to show it’s not OK to ask for them to come down.”

Following the bill’s passage, the Legislative Jewish Caucus celebrated by placing mezuzahs on their own office doors.

Rabbi Mendy Cohen, co-director of Chabad of Sacramento, was approached by David Bocarsly, a consultant to the LJC. “He called me up and he said, ‘We’re doing this. Would you be willing to put up mezuzahs for all the senators and assemblymen who don’t have them yet?’ ” Cohen told Chabad.org. “I said, ‘Not only am I willing, but I will donate those mezuzahs!’ ”