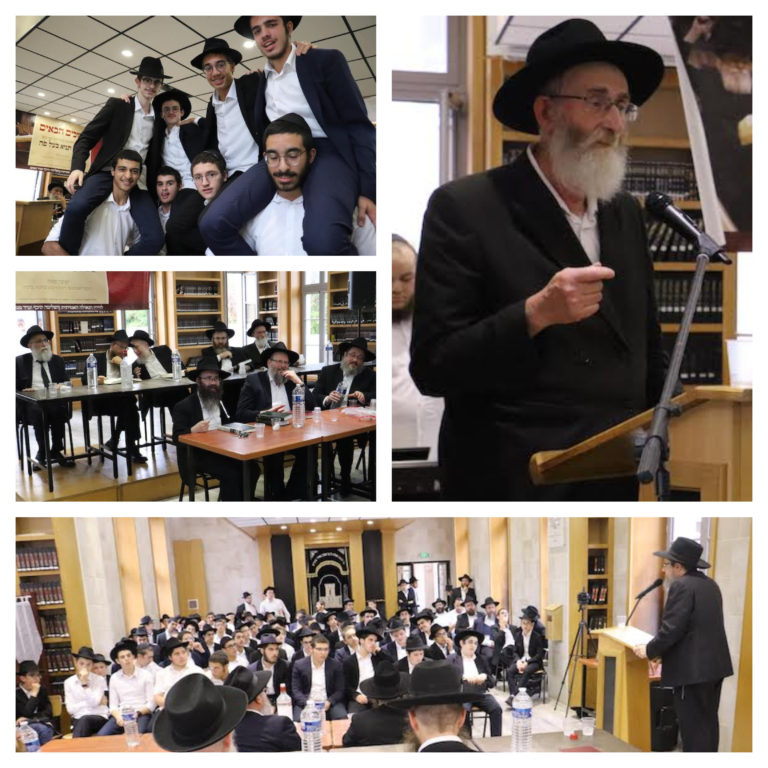 Students in Brunoy’s Yeshiva Ketana studied Tanya baal-peh as part of a mivtzah, with four students completing the entire Tanya.

In recent weeks, Brunoy’s Yeshiva Ketana had the tremendous merit of celebrating an exceptional event with the graduation ceremony and awards of the Mivtza Tanya Baal-Peh.

Rabbi Yoel Eidelman emceed the evening and congratulated the students for their hard work and diligence. He spoke of the great importance and the material and spiritual benefits that one achieves by the study of Tanya baal peh.

Then Rabbi Yitshak Nemanow , director of Yeshiva, was invited to speak. Rav Nemanow said that the Rebbe had told him in yechidut that at the Yeshiva in Brunoy great importance was attached to the study of Tanya by heart!

Rabbi Mendel Gurevich, director of the Yeshiva, spoke next. He related that once, while in yechidus, Reb Nissan Nemanow told the Rebbe that three bochrim had learned Tanya by heart. On hearing this news, the Rebbe rose from his chair!

The last speaker was Rabbi Mendel Abrams, mashpia in the Yeshiva Ketana, who spent a lot of time questioning the students.

Rabbi Eidelman took the opportunity to thank Rabbi Abrams for his dedication and the Abrams family for sponsoring the mivtza in memory of their mother Sarah Abrams. He also thanked Rabbi Gourevitch for his generous participation in the students’ awards.

After these words of encouragement, the lucky finalists were invited to come up to the platform with their parents to receive their diploma and their reward.

First, students who had learned the first 12 chapters of Tanya were invited to receive their prize. Then, with great applause, it was the turn of the six students, the Tmimim: Avraham Baruch Slonim , Menachem Mendel Sudry, Menachem Mendel Nisembaum, Efraim Wolf, Yosef Yitshak Ouaki, Menachem Mendel Apelbaum to be rewarded.

To conclude the award ceremony, they then invited the four bochurim who completed the entire Tanya by heart, the Tmimim: Menachem Mendel Zerbib , Avraham Taubenblat, Nachum Segal and Shalom Dovber Hababou .

At the announcement of their names, the entire yeshivsa rose in their honor and applauded for a long while.

The evening went on in music with the singer Reb Yoni Shlomo (whose son was one of the lucky finalists), who came especially from Israel for the event.

Rabbi Eidelman concluded the evening by pointing out that all these wonderful results were due to the tireless efforts of the teachers of the yeshiva, who invest on a daily basis a lot of strength in the education of the bachurim, both in the study of the Gemara, Chassidus, mivtzoim and all other areas.