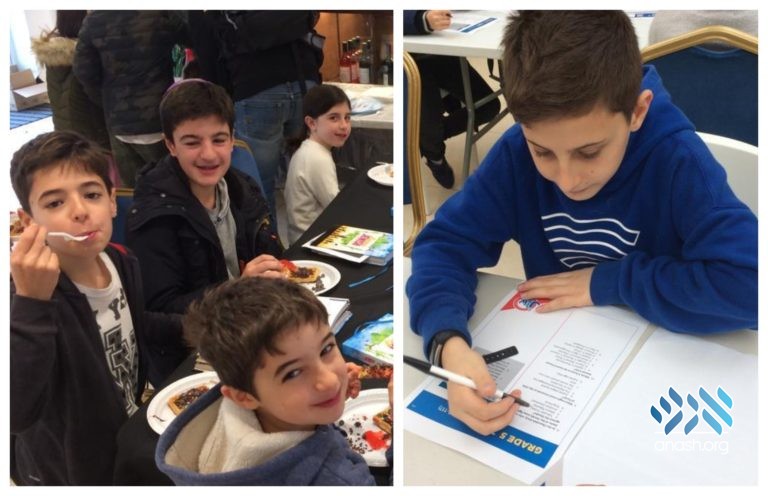 On February 9, students from 6 Hebrew schools all over the United Kingdom will broaden their Jewish horizons with an international Torah competition

Aidele Rose runs the Cardiff Hebrew School in Wales, where the first shul was built in the 1850’s. Despite the community’s rich heritage, Cardiff’s synagogue membership totals 150, with just 10 of its youngest members enrolled in Hebrew School.

Still, the community, made up of mostly seniors, was thrilled to read about the launch of JewQ, an international Torah competition, in Wales. “People are proud to see Jewish education thriving in Wales,” says Rose.

For Chanchi Alperowitz, whose Hebrew School in Bournemouth has just over a dozen kids, joining JewQ was a no-brainer. “Kids are looking forward to connecting in a global Jewish experience,” she says. Of course, the United Kingdom has its share of thriving Jewish communities in Manchester and London, but it’s the smaller Hebrew Schools that stand to gain the most from JewQ.

Rochel Leigh, whose school in college town Cambridge has an enrollment of 12 says JewQ has transformed the classroom atmosphere. “Our students are so excited to be part of something bigger.”

Most exciting is the prospect of joining together with other Jewish kids from around the region. Close to 30 JewQ champions from 6 different Hebrew schools in England, Wales, and Ireland will represent their schools in a live competition event in just a few weeks.

And of course, kids love to compete. “In England, competitions are very popular—spelling bees, chess tournaments, rugby championships…here they get a chance to push themselves in a competition centered around Torah.”

Students who will make it onstage have scored the highest on 3 tests taken over the past 3 months; they have earned their time in the limelight. Says Leah Moscowitz, director of the Hebrew School in Wimbledon, “I’ve never seen my students so excited about learning. They know their stuff backward and forward.”

Kids have been learning material from their JewQ textbooks, which were written and designed especially for the championship. Called Living Jewish, the books cover all the basic fundamentals of Jewish practice. “Our entire family studies the book together,” one parent told Gancz.

The students are absorbing information at an impressive rate. Chanchi Alperowitz is impressed. “Our Hebrew School curriculum is very hands-on,” she explains. “We play a lot of educational games. Nothing compares to how much knowledge the kids have retained from studying on their own time.”

The game show, taking place in Wimbledon, is just one in a series of regional events happening before the international Shabbaton and competition this March. Though the England schools will be opting out of the Shabbaton experience, “kids love that the program is happening nationwide,” says Moscowitz.

Plus, there are other motivating factors. Besides for the promise of competing onstage, all students who joined JewQ will be joining a trip to an indoor rock climbing park with their new Hebrew school friends. “All the schools will be going together—we’ve never done anything like it before,” says Hebrew school director Rifky Lent from Dublin, Ireland.

The JewQ model is the alternative to traditional classroom teaching that is on track to become the next big thing in Jewish education. So far this year, 2100 Hebrew school students have joined, double last year’s 1008. At the United Kingdom regional event alone, over 100 seats will be set up for the game show audience. “Parents and grandparents are excited to watch,” says Moscowitz. “They’re so proud of how much their kids have learned.”