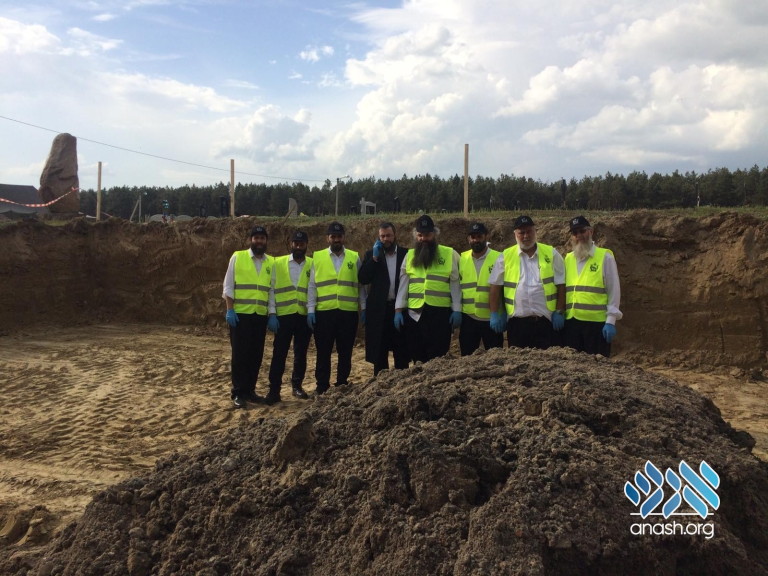 A delegation of Zaka volunteers are working in Brest-Litovsk, (“Brisk”) Belarus to bring the remains of kedoshim murdered during the Holocaust to kever yisroel.

The discovery of the mass grave of men, women and children who were brutally shot was made by construction workers last month. All work has since stopped.

Buried in the huge mounds of dirt were bones, personal items and clothing belonging to the kedoshim who were murdered there.

The find is one of the most gruesome discoveries from the Holocaust period, and is incontrovertible proof of of the extermination of the Brisk Ghetto inhabitants by the Nazis, ימ”ש, with the the piles of dirt filled with body parts, human hair, wallets and articles of clothing still strewn about like trash on the dirt.

Despite their experience with grisly sights, the volunteers are shocked to the core as they work around the clock to bring any remains they can to kever yisroel.

Delegation head Rabbi Tzvi Chosid told Israeli press that the scenes they encountered there should make every heart shudder. Although local Jews wanted the remains to remain in the place they were discovered, the decision has been made to remove them. The volunteers went into the construction site yesterday to continue their holy work of gathering the remains of the kedoshim.

The levayos for the kedoshim will take place on Thursday and will be officiated by shliach Rabbi Chaim Rabinovitz, Chief Rabbi of Brisk. Zaka sent 6 volunteers to bury the remains in 12 caskets that were prepared by the Brest city council; some sixty talleisim were donated by benevolent Jews in Eretz Yisroel. Local as well as international dignitaries, including the mayor and military brass, will attend the funerals.

Over 1400 bones are being brought to proper kevurah and will join the 300 that are already buried in the Brisk cemetery.