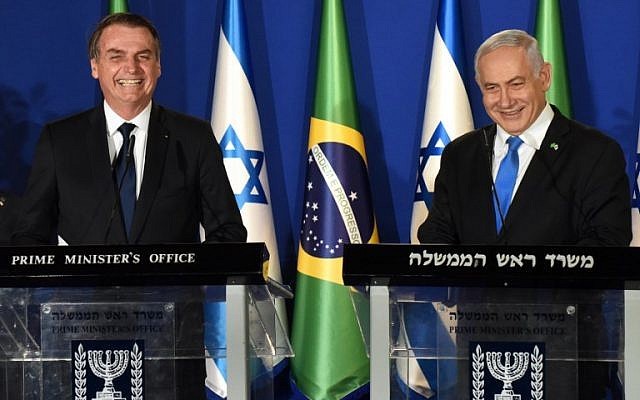 Brazil opened a trade office in Yerushalayim Sunday, in a ceremony attended by the son of Brazilian President Jair Bolsonaro and Israel’s Prime Minister Binyamin Netanyahu.

Speaking at the ceremony, Eduardo Bolsonaro, a lawmaker, said his father intended to make good on a pledge he made early this year to move Brazil’s embassy in Israel from the city of Tel Aviv to Yerushalayim.

“He told me that for sure — it’s a commitment — he’s going to move the embassy to Jerusalem, he’s going to do that,” the younger Bolsonaro said, in Netanyahu’s presence.

The Brazilian head of state visited Israel in March, when he announced his country’s intention to open a trade office in the disputed city.

The United States relocated its embassy from Tel Aviv to Yerushalayim in May 2018, with Guatemala following suit. Paraguay made the move, but later backtracked.

Fears have been raised that moving the embassy could endanger Brazil’s valuable meat exports to Arab markets but Eduardo Bolsonaro said any delay was due to Brazil wanting to prepare the move in a thorough manner.

“We want to do a movement to Jerusalem not only for Brazil but to be an example for the rest of Latin America,” the Brazilian lawmaker, who is also chairman of his parliament’s foreign relations and national defense commission, said.

Speaking at the ceremony, Netanyahu noted “President Bolsonaro’s commitment to open an embassy in Jerusalem next year.”

Netanyahu thanked Brazil for its support of Israel in international forums and noted recent bilateral aid the Jewish state provided to cope with natural disasters.

“Israel was there, and Israel will always be there for the people of Brazil and for our common friendship,” Netanyahu said.